Jonathan Shikes
WeldWerks Brewing just celebrated its biggest party of the year last weekend.
WeldWerks Brewing, coming off the high of its stellar WeldWerks Invitational in Greeley last weekend, has also received two honors in Zymurgy magazine, the publication of the Boulder-based American Homebrewers Association, sister group to the Brewers Association. The brewery's flagship hazy IPA, Juicy Bits, was named as the ninth-best beer in the country by AHA members who were surveyed. This is the second year in a row that the beer has been in the top ten, moving up one spot from last year. And WeldWerks itself moved up from seventeenth to twelfth place in the Top Ranked Breweries category.

“Honestly, when Juicy Bits tied for tenth last year, I thought it must have been a mistake. We had been open for just over three years and we produced less than 6,000 barrels in 2018, which made us the smallest and youngest brewery in the top ten by a fair margin," says brewery co-owner Neil Fisher. "Now, in 2019, with Juicy Bits climbing a spot to number nine, I realize that it wasn't our beer that I underestimated, it was our team. Every single employee here works tirelessly to make WeldWerks such a special place, and the way home brewers and beer enthusiasts have latched on to our brand is a reflection of their dedication to excellence."

Thursday, June 27
Great Divide Brewing taps Margarita Gose at both locations as part of its weekly small-batch New Year, New Beers program. The beer is "an artful blend of Tequila barrel-aged and non-barrel aged gose with lemon peel and kaffir lime leaves," the brewery says. It weighs in at just 4 percent ABV.

Westfax Brewing
Friday, June 28
Little Machine Beer Company will tap two beers today. The first is the gluten-free Secret World Saison, a 5.7 percent ABV beer brewed from millet and buckwheat. It has a "fruity yeast character, a dry peppery finish and was made with seasonal spice additions," the brewery says. This is only the second gluten-free beer that Little Machine head brewer Brett Williams has made, but he says he is "really excited about continuing to explore this new territory of brewing. My goal has been to brew and develop styles that naturally complement the nature of these gluten-free grains. This one definitely nailed it." The brewery will also tap You Make Me Fuschia Citrus Hibiscus Gose, a 4.6 percent ABV salted tart wheat beer made with naval oranges, dried hibiscus and a touch of coriander.

Westfax Brewing in Lakewood releases Blootylicious Blueberry Wheat Beer in four-packs of sixteen-ounce cans for the first time. Anyone wearing jorts to the event will receive $2 off one four-pack. There will also be new Blootylicious merchandise for sale, fun music and food trucks. 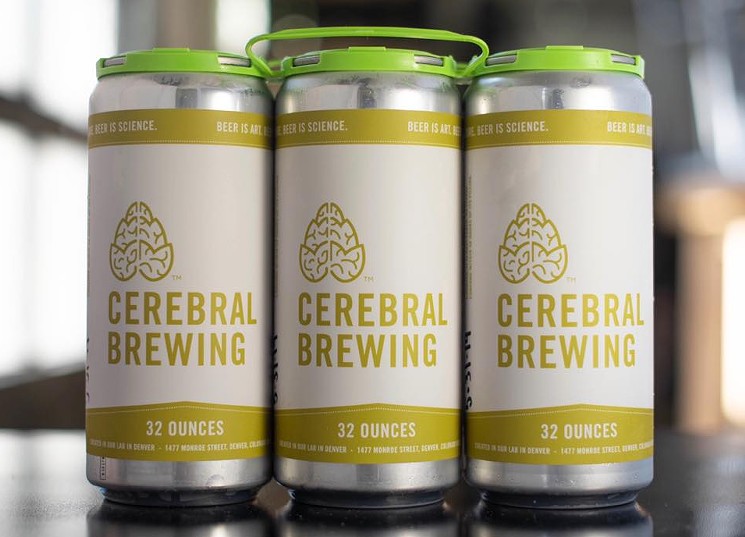 Cerebral Brewing
Saturday, June 29
Cerebral Brewing is known for its hazy IPAs and pastry stouts, but the brewery also makes terrific foeder-aged lagers. As such, Cerebral will host its first Can Jam: Lager Fest, highlighting "some of our favorite out-of-state breweries that we feel are making some of the best crispy bois in the country," the brewery says. For the fest, Cerebral will shut down its parking lot and sell cans of mostly lagers from Almanac Beer, Alvarado Street Brewery, Brouwerij West, Finback Brewery, Modern Times, Resident Culture, Schilling Beer, Threes Brewing, Trillium Brewing and Wren House Brewing, starting at noon. Cans are only for drinking on site. Miss B's Vietnamese Food Truck will be out front starting at 2 p.m.

Odell Brewing's RiNo brewery has collaborated on a dill pilsner with the pickle makers at the Real Dill. Dilsner will go on at 1 p.m., and the Real Dill will be on hand with pickles as well.

Odd13 Brewing teamed up with its friends from Cerebral Brewing and Fiction Beer Company to make a new collaborative hazy double IPA called the League of Extraordinary Hopheads. This 8 percent ABV beer was brewed with Citra, Vic Secret, El Dorado and Nelson Sauvin hops. It will be available on draft and in six-packs at Odd13 and Fiction today, and at Cerebral Brewing on another day.

Epic Brewing will celebrate its sixth anniversary in the River North Art District with a party featuring new beer releases, music and specials.

Locavore Beer Works celebrates its fifth annual Freedom Fest from 11 a.m. to 11 p.m. and welcomes back Jolly Farmer Watermelon Wheat in cans and on draft. There will be live music, food from Brad’s Pit BBQ Colorado and a tie-dye booth.

The 30th annual Colorado Brewers Festival, hosted by the Downtown Fort Collins Business Association, runs from noon to 5 p.m. at a new location, Canvas Stadium on the CSU campus. This year's festival brings unlimited tastings from a menu of more than 150 beers brewed by fifty Colorado breweries, along with live music and entertainment, artisan exhibitors and food options. COBF was founded in 1990 by Doug Odell of Odell Brewing and Brad Page of Coopersmith’s Pub & Brewing, and is the oldest Colorado-only beer fest in the state. Tickets are $50. Get more information at ColoradoBrewFest.com.

Monday, July 1
At 3 p.m., Old 121 Brewhouse will kick off a series of festive small-batch beer releases in honor of the Fourth of July, with Mexican Lager, a light beer brewed with lime zest. The brewery will also tap a homemade black cherry soda. Tomorrow, the brewery will tap Honey Brown Ale on cask. Old 121 will be closed on July 4 and will return on Friday, July 5, with a patriotic American wheat ale, brewed with red wheat, white wheat and blueberries. Then, on Saturday, it will be raspberry wit.

Wednesday, July 3
"You go to enough metal shows, you start to lose your hearing. Maybe that’s why y’all had to ask for this one for so long," explains TRVE Brewing, which will finally release Cold, its outstanding Bohemian-style kellerpils, in six-packs of twelve-ounce cans. The brewery opens at 3 p.m.

Seedstock Brewery will keep the doors open today for a festive Fourth of July barbecue and potluck beginning at noon. The brewery will provide the brats and encourages attendees to bring a side. The new patio will be open, and Seedstock will be serving its brand-new kolsch.

Join Odyssey Beerwerks in Arvada from noon to 8 p.m. for a July 4 party and several summer beer tappings. The beers are Strawberry Margarita and Tangerine Tree. You can also bring your own meats to cook on the grill, and bring your own USA-themed vinyl to play on the record player. Odyssey will be selling bombers from its cellar and offering discounts on Crowlers.

Breckenridge Brewery taps its latest beer, Strawberry Sky, with a party from 4 to 7 p.m. at its Farmhouse in Littleton. Available year-round, the fruit-forward strawberry kolsch "offers sweet strawberry notes behind Huell Melon hops to create shining complexity that bursts with fresh fruit flavors of strawberry and honeydew," says Breckenridge, which is owned by AB InBev. The beer comes in at 4.7 percent ABV.

Joyride Brewing celebrates its fifth anniversary from 10 a.m. to 10 p.m. with Edgewater's biggest party of the year. There will be a full slate of live music, multiple food trucks, a kids' zone and five collaborative beers celebrating five years. They were made with Downhill Brewing, Little Machine Beer, Strange Craft Beer Company, Station 26 Brewing and Westbound & Down Brewing. 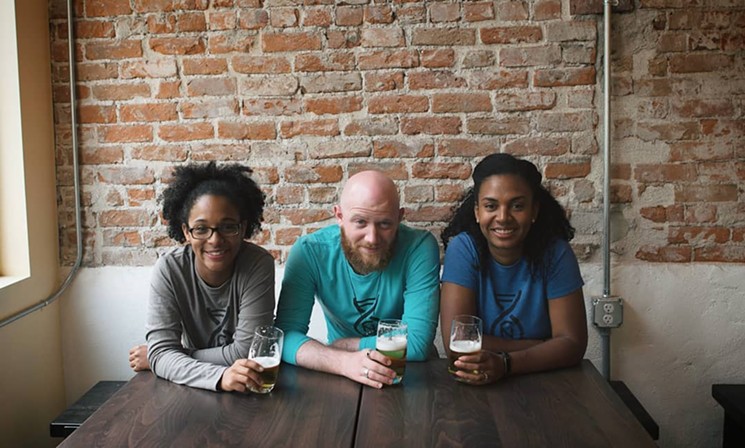 Novel Strand Brewing
Wednesday, July 10
Novel Strand Brewing has gone once around the sun, and the owners feel like celebrating, so the Baker neighborhood brewery will be releasing new beers each day from Wednesday through Sunday. Today's draft releases are Popular Demand, a German-style Keller pils-inspired lager brewed and lightly dry-hopped with Kohatu, Motueka, Taiheke and Waimea hops; and Muscles from Brussels, a small saison fermented with a blend of three Brettanomyces strains and lightly dry-hopped with African Queen and Rakau.

Friday, July 12
Novel Strand celebrates its one-year anniversary with a triple can release. The first beer is Green Showers, its hoppy flagship. The second is Baby Showers, a small hoppy ale made with Amarillo, Huell Melon and Mosaic hops. The third is A lot Cooler If It Was Green, a strong hoppy ale brewed with Idaho 7, Mosaic and Nelson.

Saturday July 13
In keeping with its international theme, the Intrepid Sojourner Beer Project will host its third annual Bastille Day party and tap a specialty saison made with a blend of French culinary herbs and spices. In honor of the French Revolution, the brewery will have a French-cheese focused beer pairing with the Truffle Cheese Shop, a beer garden with lawn games and a local artisan craft market. Ninja Ramen will be the food truck.

Novel Strand Brewing releases Dancing on the Moon, an ale brewed with local malted barley, wheat, oats and aged hops, and "fermented and conditioned in freshly emptied cabernet sauvignon barrels by a mixed culture composed of various strains of Brettanomyces, Lactobacillus, Pediococcus and Saccharomyces," the brewery says. It was "naturally re-fermented and conditioned in the bottle by residual microflora." The beer will be available in 500 mL and 750 mL corked and caged bottles only. La Patrona will be outside with tacos.

Sunday July 14
Novel Strand Brewing wraps up its birthday week by tapping Shot on Location, Vol. 1, an ale fermented with a blend of three different Kveik strains of yeast from Scandinavia and cold-infused with coffee beans from Coffee Arabica berries fermented in Colombia using a culture of Brettanomyces and Lactobacillus. This beer is a collaboration with Queen City Collective Coffee. Ninja Ramen will be out front.