The footage stands out because of its extreme brutality: Baker died after a fight with officers that lasted approximately nine minutes and included terrified shrieks, crying and the repeated deployment of a Taser with little or no effect. But the presentation is also highly unusual: The police body-camera footage is narrated by Aurora Police Chief Nick Metz in the style of a Netflix documentary, albeit with the apparent goal of shaping public perception. Metz's tone suggests that absolutely nothing could have been done to prevent a tragedy.

This effort didn't take place in a vacuum. In January, the American Civil Liberties Union's Colorado branch filed suit against Aurora on behalf of alleged law enforcement abuse victim Jaime Alberto Torres. The document, accessible below, maintains that the pounding taken by Torres was one of at least thirteen such incidents involving officers with the city's police department and people of color since 2003, not counting what happened to Baker, an African-American.

The APD account of the Baker episode notes that officers responded to 10653 East Jewell Avenue on December 17, 2018, after a 911 call about "a verbal and physical domestic fight occurring inside the apartment." Upon their arrival, officers could hear yelling and screaming, after which they saw Baker "actively choking another male," Johnny Guillen.

A pair of officers subsequently tased Baker, but the jolts didn't stop him. Shortly thereafter, the fight was on — and by the time it was over, Baker was dead.

The Arapahoe County coroner ruled Baker's death a homicide, with the cause determined to have been asphyxia resulting from the way officers restrained him — the same thing that killed Michael Marshall after a 2015 altercation with guards at a Denver detention center. In 2017, Denver agreed to settle a lawsuit over the case for $4.65 million.

A similar scenario could line up against Aurora: Daisy Baker, David's wife, has reportedly secured the services of Killmer, Lane & Newman, LLP, the Denver-based law firm that represented Marshall's family.

The Baker video presents a counter argument; see it below. Warning: The footage could disturb some viewers.


The production is introduced by APD public information officer Matthew Longshore, but the lion's share of the narrative is carried by Metz, who's seen against a black backdrop and delivers his remarks with a decided somberness.

Just past the seventeen-minute mark, for instance, Metz says: "At this point, we are six minutes into the fight. My officers are obviously exhibiting signs of exhaustion. Mr. Baker is also exhibiting signs of exhaustion, not only from the fight between him and the officers, but also combine that with the fight with the family member prior to officers' arrival. Mr. Baker is finally taken to the ground but continues to fight and kick officers as they attempt to take him into custody."

Metz adds: "Officers begin to gain control of Mr. Baker's arms, which he has buried under him, but they are having a difficult time due to his large size. One of the officers has to use his baton as a pry tool to get one of his arms free in order to handcuff him. Once Mr. Baker's second arm is free, officers begin to put handcuffs on him. It should be noted that it takes four pairs of handcuffs, all linked together, to successfully restrain Mr. Baker."

Before long, Baker is no longer resistant — because he's lost his life. Here, the focus of Metz's monologue shifts to the inquiry into what went down:

"Members of the Aurora Police Department's major crimes homicide unit responded to the scene and requested assistance from the Denver Police Department to complete a thorough and complete investigation," he allows. "They were also assisted by the Arapahoe County coroner's office. The facts of the case were then presented to the 18th Judicial District Attorney's Office, who after review ultimately concluded that no member of the Aurora Police Department violated any Colorado statute with the events that occurred at 10653 East Jewell on December 17, 2018. This case is now being reviewed by our force review board to determine if there were any policy violations." 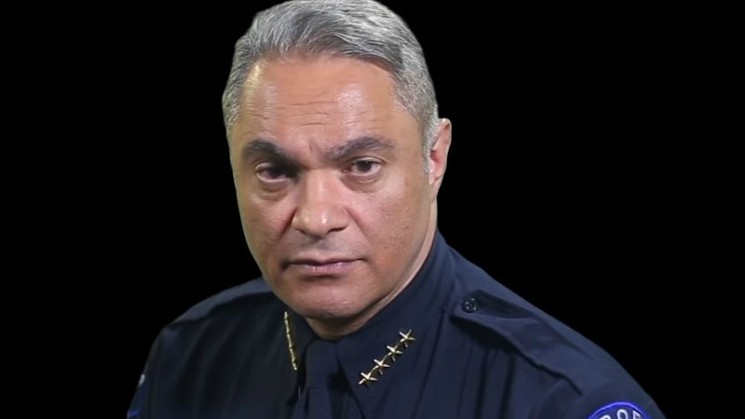 Aurora Police Chief Nick Metz as seen in the video.
Aurora Police Department via YouTube
In his summary, Metz attempts to put Baker's fate into context.

"As you were able to see from the body-worn footage, this was an incredibly violent fight between Mr. Baker and the officers — a fight that began well before officers arrived and continued for approximately nine minutes once...officers did arrive," he allows. "My officers did not have the option to get up and walk away from the fight. Officers observed a male being physically choked, which is a felony. It is the duty of the officers to place this man into custody to further prevent any other crimes from occurring and to protect the family who was present at the time."

As chief of police of the Aurora Police Department, Metz says, "it is my responsibility and my charge to make sure that every single incident — critical incident — that involves my officers and the death of a community member, that we take these very seriously, and that we complete a very thorough and transparent investigation, and that we also look at our policy and our training to see if there's anything we need to do different to do what we can to minimize anything like this from happening again in the future."

The coda: "On behalf of the men and women of the Aurora Police Department, I want to express to the family of Mr. David Baker our sincerest condolences." Metz then addresses viewers, saying, "Thank you for taking the time to review this video."