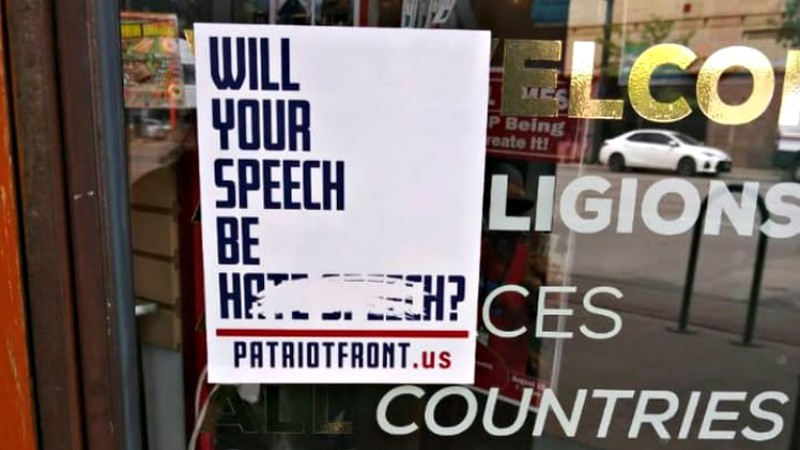 @CocoDavies
The Patriot Front sticker found affixed over Hope Tank's message of inclusion on June 26.
Fascist and white-supremacist groups have been plastering the Denver area with racist messaging for at least a year, putting hate stickers in a wide variety of very public locations — and yesterday, June 26, representatives of the alt-right group Patriot Front struck again.

Among the targets were businesses with openness and inclusivity at the core of their philosophy, including BookBar, at 4280 Tennyson Street. But the area that appears to have been the focus of the activity was a stretch of Broadway near a Goodwill store where an activist was recently stabbed while attempting to remove such stickers — a brutal assault for which no charges have been pressed.

At the center of the propaganda onslaught was Hope Tank, at 64 Broadway, whose front window sports the following declaration: "We Welcome All Religions. All Races. All Countries of Origin. All Sexual Orientations. All Genders. We Stand With You. You Are Safe Here."

The stickering doesn't strike Hope Tank owner Erika Righter as coincidental. "I have heard through the grapevine that there were about four or five other stickers around the neighborhood," she says. "But I think the placement of ours was clearly very deliberate."

So, too, is the response crafted by Righter and fellow business owners along Broadway. On Friday, June 28, they're throwing a block party at which they'll celebrate everything the Patriot Front seems to find so threatening.

"The whole goal is hope over hate," Righter says.

This plan evolved over the course of a day in which Righter found herself wrestling with the reaction after an image of one sticker was shared on social media by podcaster and longtime Westword contributor Bree Davies.

"My phone was ringing off the hook, and people were messaging all day," she reveals. "I was not at the store when it happened. I had meetings all day, so my staff held it down in the midst of being bombarded. We even had a news crew from a TV station that was trying to go through our garbage, wanting to see the stickers that we pulled off the door. And the way they descended on us was just as much of a violation as what had just happened. I have a young staff person who just removed this hate from the door, and then she's got people barreling their way into the business without even contacting me. They just went ahead and did it — and the sensationalizing of this is a really big part of the problem."

The enthusiasm of the television crew stands in stark contrast with the crickets that have greeted Righter when she's tried to get assorted media outlets interested in "things we begged people to cover," she explains, noting that newly elected Denver City Council member Candi CdeBaca had her life threatened online and former Ccongressional candidate Saira Rao "was having people do cyber-attacks on her business. But those stories — stories about folks in the community being attacked and threatened because of their ethnicity or the color of their skin, or stories about the nonprofits we work with and the good work that's happening in the company — don't get covered. I find that challenging."

As these observations suggest, Righter's creation (a multiple Best of Denver award winner) is far more than a simple retail outlet. She describes Hope Tank, which was founded in 2012, as "a gift store where everything we sell gives back. We partner with smaller organizations that are doing really important work in the community, many of which people have not heard of. Our goal is really to educate and inspire people to action and demonstrate that each of us have resources that we can bring to that sector that we may not even know about. We make it really fun and bring people into those conversations that they're not typically having."

Collaborations are intrinsic to the Hope Tank model, and when Righter heard about the stickering, she was huddling with just such a cohort: the folks behind Lawrence and Larimer, at 3229 East Colfax Avenue. "It's an African-American-owned apparel company," she says, "and when we talked about what was happening, the couple who own the business said, 'You've got to do what you do,' which is bring the hope in and remind people that if you're upset about this, one of the things you can do is go support the businesses on Broadway and help us reclaim our neighborhood from this hate that has descended."

The block party was the result of this advice, and while the event is still evolving, Righter can share the broad strokes of the concept. "All the business owners — and a lot of people don't know this, but there are 24 women-owned businesses along four blocks of Broadway — have been talking on these little Facebook threads," she says. "And right now, we know we're going to go from 4 to 8 p.m. and we'll have music, we'll have indigenous healers who are in business on the block, we'll probably have sidewalk chalk art. I have no idea who will roll in. But it's a way to make a statement about our community and our connectedness. Broadway is an incredibly important part of the story of Denver, and it needs to be protected."

This state's story has some dark chapters, too, Righter points out: "Colorado is a hub of white-supremacist activity, and we've also been the bedrock of the KKK. People should do a little homework and understand that there is a rich history of that kind of thing here that many, many people have to deal with."

Adds Righter: "I walk the world as a white person, and so my privilege allows me to tune these things out sometimes — and what we experienced pales in comparison to what people of color are experiencing on a daily basis. But these stickers are a micro-aggression that is meant to signal, it's meant to provoke. And the course we're choosing to take is to show up for each other and be a force for good in the community — and to say, 'We're just not going to tolerate this.'"