Mark Antonation
Where's the wiener?
Chicago abounds with regional specialties, some with murky histories — such as the Mother in Law sandwich (if it can be called a sandwich), a combination of a hot dog and tamale that somehow, despite its craveable street-food appeal, hasn't caught on outside the Windy City.

In fact, the Mother in Law hasn't spread far even in its home town. Maybe that's because most folks enjoy the juicy snap of a good frankfurter doused in mustard and loaded with relish, and Chicagoans are just too bound by tradition to consider alternatives. Or maybe it's because the tamale used to make an authentic Mother in Law is kind of weird in its own right: Instead of the fluffy, husk-steamed tamales so common in the Southwest, these are extruded, meat-filled cornmeal cylinders cooked in paper wrappers (instead of a corn husk), usually on the same roller grill used to heat hot dogs.

Most sources trace the origin of the Mother in Law to Fat Johnnie's on Chicago's South Side, where the mashup is weighted down with chili (the fine-grained Coney Island variety), cheese, a tomato slice and a pickle spear. While the origin of the name "Mother in Law" has been lost to time, the distinct style of tamale can be traced to the Mississippi Delta. Migrants moving northward to find work in bigger cities brought the Southern-style tamale with them, inspiring copycat versions at various towns along the Mississippi River. (I've eaten paper-wrapped tamales at Blues City Cafe in Memphis, which claims to have the best in the world, though the cafe doesn't serve a Mother in Law.) 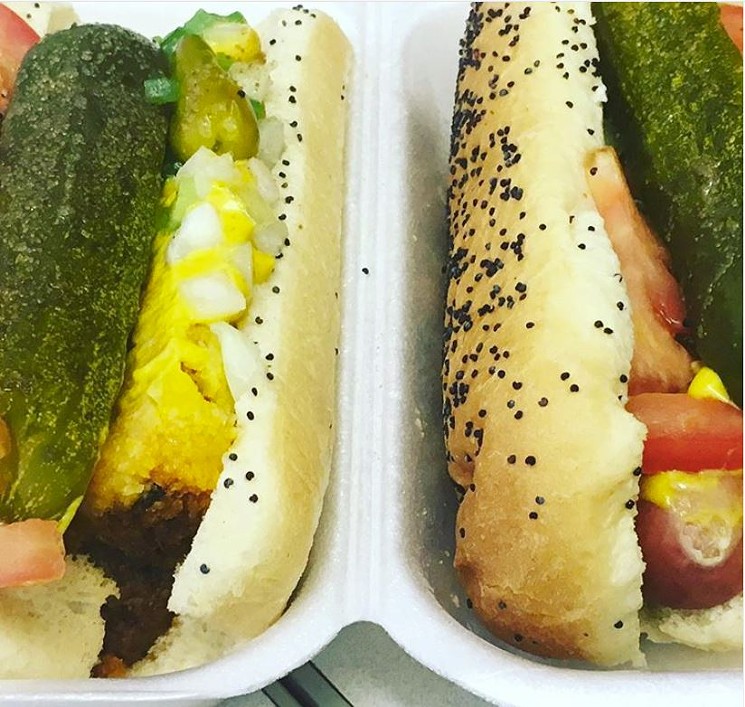 At Mile High Vienna Stand: Mother in Law on the left, Chicago-style on the right.
Mark Antonation
Now that your brain is teetering between absolute horror and drool-inducing curiosity, you no doubt want to know where you can hunt down the elusive Mother in Law in Denver. Look no further than Mile High Vienna Stand, at 300 Santa Fe Drive. The tip-off is the poster advertising Chicago-sourced tamales on the wall near the order counter. While the Mother in Law isn't on the menu board, you can request a simple swap of the standard Vienna beef hot dog for a tamale.

When I asked recently, the cashier seemed a little confused at first, but "Mother in Law" is actually programmed into Mile High's POS system (I know, because it showed up on my receipt), so just make sure you explain your intentions clearly. It also helps to use a hand gesture in which you cup one hand to represent the bun, and then place your opposite index finger in the center of your cupped hand, conveying in a kind of ersatz sign language your desire to put a tamale on a bun.

A few minutes of conversation between the cashier and clerk may ensue, but eventually you'll be rewarded with Mile High's classic Chicago-style dog, only locked and loaded with a tamale. Beyond that unusual stuffing, a poppyseed bun is the standard, along with a pickle spear, tomato wedge, bright-green relish, mustard, diced onions and the mandatory clincher: sport peppers that burst with hot, tangy juice (usually all over the front of your shirt). Chili con carne isn't part of the package, but you could probably go that route if desired.

Chicago Style Beef & Dogs, at 6680 West Colfax in Lakewood, also stocks Supreme brand tamales (even more tubular than those found at Mile High Vienna Stand), so you might be able to convince a server there to build a Mother in Law for you. Just don't skip the sport peppers.