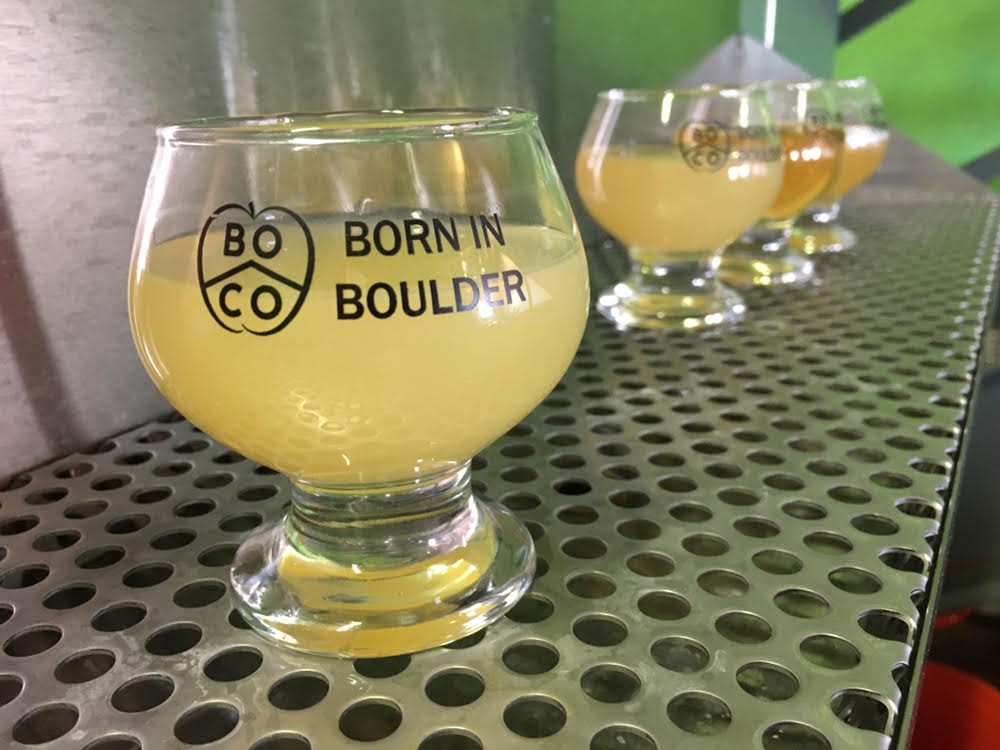 BOCO Cider
BOCO Cider will feature rotating taps of housemade cider as well as guest ciders from other Boulder County spots.
A new artisanal beverage company is opening in Boulder, but it's not a craft brewery. BOCO Cider will hold its grand opening on Friday, July 5, at 1501 Lee Hill Drive in north Boulder.

Owner Michael Belochi says his cider is a perfect fit for Boulder. “It wraps around the Boulder ethos; we make the kind of cider you could have made on a farm 100 years ago, as long as the farm had refrigeration,” Belochi explains.

That's because his ciders are unfiltered, free of sulfites and made with natural ingredients. They're even naturally carbonated, which he says is the trickiest part. The cider maker hopes to introduce the versatility of cider to those new to the beverage and to crush preconceived notions of those who have only had sweet, mass-produced versions. “It’s a fun product, because you can add different flavors to it, tweak it, and really come up with fun combinations,” he says.

BOCO Cider
To demonstrate that cider doesn’t have to be sweet, Belochi is using techniques from the beer world. While dry ciders are becoming more sought-after by drinkers, he is proud of BOCO's sour ciders, including a Belgian sour that's made with the same Belgian yeast strains that are often utilized in lambic or other sour beers. “It’s a lovely, clean sour,” he notes, and points out that the same yeast is used in a kombucha-infused cider that tastes similar to a tart kombucha, with hints of apple vinegar.

BOCO's English-style cider is a semi-dry variety that’s bottle-conditioned with the addition of fresh apple juice (which creates secondary fermentation). The ginger cider is made with thin-sliced ginger root that's boiled in apple juice. This one was paired with green curry wild shrimp and jasmine rice at Boulder's Taste of Pearl event in late April, and people were blown away, Belochi states. A more robust bourbon-barrel-aged cider takes on notes of vanilla, wood and caramel and gets a juicy note from the addition of cherries.

“None of our flavors are hard to find,” he says. “Just because it’s all-natural cider, flavors don’t have to be weak."

The new taproom holds twelve taps serving BOCO's own ciders as well as guest ciders from other local brewers, and Belochi plans to introduce something new each month. BOCO Cider is open from 4 to 9 p.m. Thursday through Sunday. Call 720-938-7285 or visit bococider.com for more information.