Michael Roberts
Crime scene tape along 10th across Lincoln.
Just after 7 a.m. today, July 1, amid Monday morning rush hour, Denver police officers shot and killed a suspect who is said to have been yelling and waving a handgun that he fired on multiple occasions.

The incident took place along Lincoln Street near the intersection with East 11th Avenue, a stone's throw from the studio for CBS4, and at least one TV crew had to take cover before officers opened fire on the man.

No officers were injured in the incident, and Denver Police Chief Paul Pazen says investigators believe there isn't any additional danger to the community as a result of the disturbing wake-up call.

The manager of Dependable Cleaners, at 998 Lincoln, was among those terrorized by what went down; he asks that he be referenced using only his first name, Scott. According to him, an employee was loading a company vehicle when staffers heard a raised voice and what sounded like gunshots from the street. They soon spotted a man heading north on Lincoln, wielding a firearm and randomly squeezing the trigger.

Nearly two hours later, Scott, who described the thus-far-unidentified man as an African-American wearing a black hat and a black trench coat, was still visibly shaken by the experience. 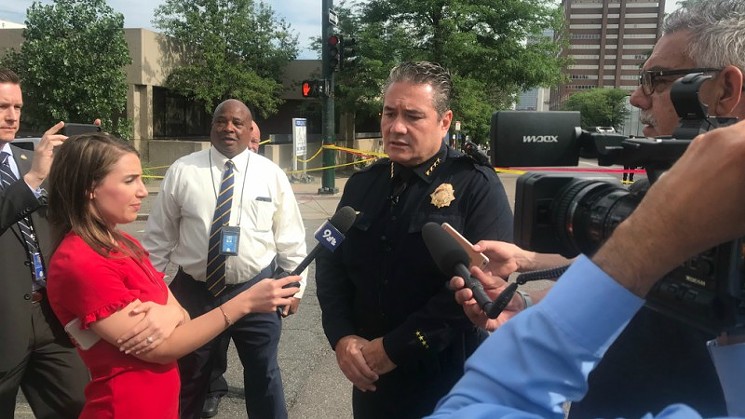 Denver Chief of Police Paul Pazen meets the press.
Michael Roberts
Casey Klein had parked his car at the corner of Tenth and Lincoln, and he and partner Natalie Snyder awoke to find the driver's-side window of the vehicle shattered. Police were unable to immediately confirm to Klein and Snyder that the damage had been done by the suspect, but officers belatedly encircled the car in crime-scene tape so that the possibility could be investigated.

Klein and Snyder, who live in an apartment building on the east side of Lincoln just north of Tenth, were awakened by the sound of gunshots, which they say aren't common in the neighborhood. Like Scott, they took note of an increasing population of homeless individuals in the area, including those who have been camping along the parking lot of Westword, which is located at 969 Broadway, but they haven't been overly concerned by this demographic shift, associating it simply with city life in general.

Then again, Snyder has seen more than enough police activity for her liking of late. She works at Union Station, and she says that yesterday, she saw a slew of officers converging on a suspect with guns drawn.

Another person who found herself too close to the suspect for comfort was Makenzie O'Keefe, a reporter for CBS4. O'Keefe was part of a crew removing equipment from a vehicle inside the parking structure at the station's 1044 Lincoln Street headquarters after returning from covering another story when they heard screaming and gunshots.

CBS4 news director Tim Wieland added that all hands were on deck inside the station when the shooting took place, leaving plenty of nerves rattled.

A security guard working for the station encouraged everyone to take cover immediately, and O'Keefe and company did so seconds before another burst of gunfire, this time from police officers whose vehicle Scott had seen zooming up Lincoln behind the armed man.

Investigators believe Casey Klein's car window may have been broken as a result of the incident.
Michael Roberts
By the time Chief Pazen arrived, a large part of the area had been closed, including Lincoln from 7th Avenue to 11th and side streets such as 10th beginning at Broadway and extending two blocks east. He told the media the closure was likely to last several more hours, in order to give investigators the chance to canvass a very large crime scene for evidence.

Because the inquiry was in its preliminary stage, Pazen gave only the sketchiest of information beyond that. He confirmed that the suspect was deceased and praised the officers who had acted so quickly to eliminate a threat to the community. But he said he couldn't talk about the number of officers involved or how many of them shot at the man. That type of information would be dispensed at a follow-up press conference likely to take place in the next 24 to 48 hours, he maintained.

He also rejected any suggestion that the police reacted too slowly, thereby allowing the man to cover several blocks before confronting him. By his estimate, the entire matter was resolved in five minutes or less.

In the meantime, Pazen encouraged anyone who may have seen the incident, or perhaps captured video of it, to contact the Denver Police Department as soon as possible. The DPD's Crime Stoppers number is 720-913-STOP (7867).

According to a map created by Denver7, this morning's episode was the 38th police shooting in Colorado in 2019 to date, and the fifth in Denver.