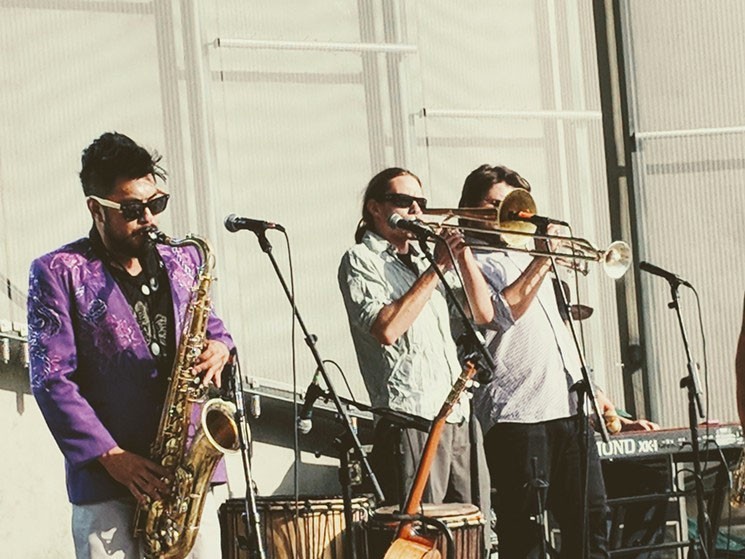 Gisele Jara
At the 25th Westword Music Showcase on June 29, Denver bandleader, saxophonist and music educator Yuzo Nieto received the Westword MasterMind award — a grant of $2,000 that he can use any way he sees fit.
Since its founding in 2005, the MasterMind program has honored more than fifty artists and distributed over $150,000, with the help of sponsors like DIME Denver, the music institute that financed Nieto’s award.

MasterMinds are some of Denver’s most creative visionaries, and include the likes of Wheelchair Sports Camp MC Kalyn Heffernan, media activist and public-access maven Tony Shawcross, and artist and hacker Mar Williams.

With his band, Pink Hawks, Nieto has created a sonic dialogue between musical genres from around the world, including Afrobeat, Latin, hip-hop, funk, blues and jazz. The group’s music is simultaneously joyful and resistant, as likely to make you think as it is to get you dancing.

While many jazz acts wallow in nostalgia, Nieto and his fellow musicians are forward-thinking. They’re knowledgeable about musical traditions, but instead of being stuck in the past, they’re using classic sounds to explore the future.

Nieto founded the band twelve years ago with his close friend Mike Neff. The two were obsessed with Afrobeat music and studied the genre, using that as a launching pad for winding improvisations. Nieto explored the culture behind the music and dove into West African musical traditions, studying music for months in Guinea, where he practiced drumming and dancing for twelve hours a day.

Most Pink Hawks members come from the Chicano and Latinx communities and bring their musical traditions to the band; recently, Molina Speaks (another MasterMind) joined the crew as an MC, incorporating hip-hop.

Nieto’s vision of liberation, expressed through his music, embraces cultural influences from around the world through a raging party, a celebration of various traditions. But he does more than create music. He’s devoted himself to music and cultural education, teaching young people about the world through arts and music, and he mentors younger musicians, gigging with them and helping them navigate the scene.

Nieto just completed a Ph.D. program in music education at the University of Northern Colorado, where he studied culturally responsive curriculum. He’s taught music in northeast Denver and Aurora, and has plans to start his own arts and music school within the next few years.

At that school, which will cater to youth of color in middle school before expanding to a K-12 model, students will study music and art history with an emphasis on culturally relevant works, and will be trained in skills like songwriting, audio production and recording, Nieto says. He’ll also offer instruction in modern and hip-hop dance and visual arts — including street art, murals and graffiti — along with creative writing and theater.

As an artist and educator, Nieto embodies the spirit of a Westword MasterMind, pushing the limits of creativity and giving back to his community. Whatever’s next for him as a musician and educator, he will continue to evolve and experiment, putting his passion for music and cultural education to work for Denver.