Ben Whelan
The seafood section of Bangkok's Khlong Toei wet market.
Ben Whelan is a Denver chef and former instructor at Emily Griffith Technical College's Culinary Quick Start program, where he taught for the last two years before he embarked on a one-year mission to Thailand to work, cook, train and eat everything in his path. He arrived in Bangkok the first week of July and will be sending dispatches on the cuisine, culture and characters he encounters along the way. Here's Whelan's initial impression of his new home.

The first thing you’ll notice upon stepping onto the streets of Bangkok is the sauna-like humidity that immediately wraps itself around your body like a warm, damp hug. The thick, heavy air also has the more pleasant effect of capturing and holding the delicious aromas of food cooking at the numerous food carts sprinkled throughout the streets and serpentine alleyways shooting off of the main roads.

The climate is an ever-present character here that dictates much of the rhythms of day-to-day life and that must be accounted for whenever venturing out into the city. Although it's tempting when discovering a new city to set out on foot, get lost and wander while getting the lay of the land, that can be a dubious choice in Bangkok. After even a short stroll, it becomes necessary to either take shelter and find respite in any structure with air conditioning or hop aboard one of the elevated Skytrains zooming above the streets to at least get closer to your final destination. 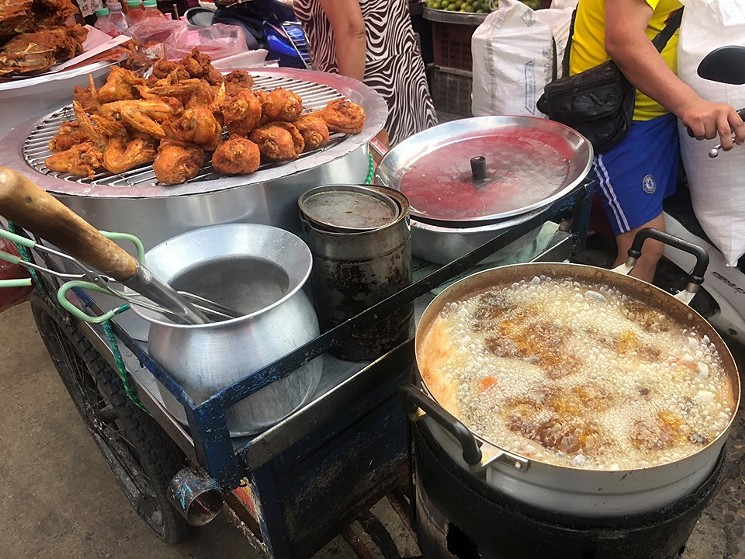 Eating street food outdoors is a way of life in Bangkok.
Ben Whelan
The second thing you’ll notice is the buzz of bustling street life that fills every inch of available public space. The sidewalks are crammed shoulder-to-shoulder from early morning until well after the sun has mercifully gone down. Given the oppressive heat, much of life here is lived outside, with shopkeepers selling their wares out of open storefronts and residents eating meals throughout the day in the shade of small, umbrella-covered plastic patio tables adjoining the vendors.

The roads are even more crowded as cars and buses share the space with tuk-tuks and fleets of scooters lawlessly careening through any sliver of daylight in traffic. Pedestrians must be constantly vigilant of drivers who have little to no regard for personal space and, in turn, possess a level of aggressiveness required to navigate the streets that would give pause to even the most the seasoned big-city dweller. Every street crossing is a mutually assured destruction pact with oncoming drivers; politely wait to to be given a path and you may never leave the curb.

The construction of the city itself is also striking, as towering buildings rise above the lush tropical greenery on the ground level, creating urban lagoons nestled in their shade. Networks of walkways suspended above street life connecting one building to the next, combined with enormous blaring digital billboards scattered throughout the hazy atmosphere give the impression of a futuristic cosmopolis reminiscent of Blade Runner, only without the flying cars. Adding to this ambience are the alternating shiny and new skyscrapers and mega-malls adjacent to seemingly abandoned relics in visible disrepair, as if in the rush to expand it became easier to simply move on rather than rebuild.

So much produce I've never seen before; this is Siam tulip stalk.
Ben Whelan
So what brought me to this pulsating, tropical anthill of a city, the "Jewel of Siam" and backpacking capital of this hemisphere? A potent cocktail of adventure, good fortune and curiosity. Beginning in my early days as a culinarian, I can remember wandering through the streets of Boston’s Chinatown and marveling at the exotic selection of fruits and vegetables in the markets and wild, untamed flavors of the Thai restaurants. I've always had the yen to explore this part of the world, but the life of a working chef rarely affords the time, much less compensation, to embark on such a journey. However, after finding myself at a professional crossroads several months ago, brimming with wanderlust and with a modicum of savings not yet earmarked for spending, I began to explore any and all avenues that would take me here. Through a series of various random and chance encounters, I was able to secure a three-month gig as a traveling consultant for a hostel group with locations scattered throughout Thailand. While monetary compensation was out of the question (work visas are nearly impossible to come by here), my employers were willing to cover all travel expenses and provide a private room in each location — a dream arrangement for any aspiring traveler.

The next move was to figure out a way to intensively expand my knowledge of the cuisine, so in the midst of a post-shift episode of Chefs Table on Netflix, I hit the pause button and impulsively made a phone call directly to the restaurant featured on the show. This audacious move was rewarded with a three-month unpaid internship at Bo.Lan, a Michelin-starred eatery focused on reviving traditional Thai cuisine from long-forgotten recipes and highlighting underexposed, highly regional offerings. At the moment I have no return ticket booked and hope to just ride out this adventure until I run out of resources, hopefully not for at least a year's time.

My goal is to bring you along as best I can and share my experiences in exploring the fabric of this rich culture and cuisine. I have no idea of exactly where this adventure will lead and what revelations await in the kitchens of Bangkok and beyond, but I'm thrilled that we get to do it together.