Rocky Flats Bar & Grill Is Back, and So Are Fish Fries

Patricia Calhoun
After some rocky years, this place is back in business.
The Rocky Flats Lounge went up in flames on July 15, 2015. At the time, the managers promised to reopen soon — certainly by the start of the 2015 football season, since this roadhouse on Highway 93 north of Golden had been a Packers hangout for decades.

But now, hundreds of thousands of dollars later, the renovation work is complete, the permits are all in place, and the newly renamed Rocky Flats Bar & Grill finally opened in early July. But it opened with new management and without a key amenity: any alcohol behind that bar.

In the early '50s, the feds awarded a major plum to metro Denver, and built a massive facility across Highway 93 whose mission was top secret, but brought plenty of workers to the area. Ed Hogan, who was running the ranch at the time, bought several temporary buildings from what was initially dubbed the "Rocky Flats Plant" and moved them across the highway in 1957. In 1961, the plant's old payroll office was turned into a bar. 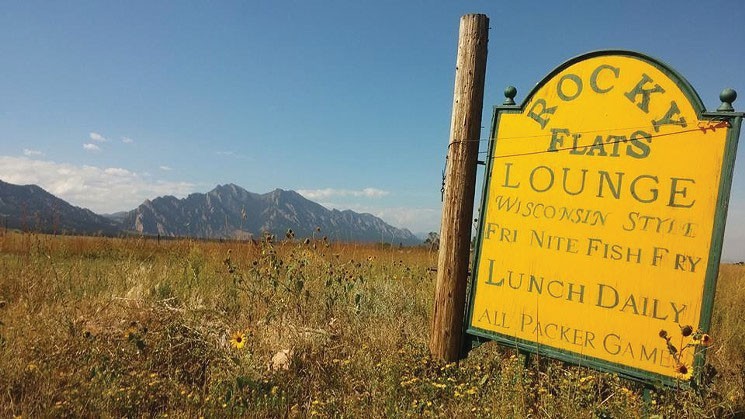 Now the Hogans, who are working with new bar owner Dan Girtin and manager Mike Bever, are negotiating with JeffCo for another liquor license. Chris Hogan acknowledges that the lack of a liquor license “is going to hang us up a little bit,” but he’s hopeful that it will be in place by this football season.

In the meantime, Girtin and Bever are hoping that other amenities will draw people back to the place. They're adding more outside games for summer activities, as well as expanding the menu to include more healthy, family-friendly options in addition to more standard bar fare. But the grand opening festivities on Friday, July 12, will still include a fish fry starting at 5 p.m.; look for catfish, walleye and perch options.

“We’re calling this the ‘neighborhood bar and grill without a neighborhood,’” Hogan says.

But then, it does have a very famous neighbor, which today is known as the Rocky Flats National Wildlife Refuge, and occupies much of the area that was once the Rocky Flats Nuclear Weapons Plant. After its own series of delays, the refuge (less the 1,300 off-limits acres at the center where the manufacturing was done) opened to the public in September 2018.

While that neighbor no longer makes nuclear triggers, the nearby Rocky Flats Bar & Grill could one day again be a great place to get bombed.