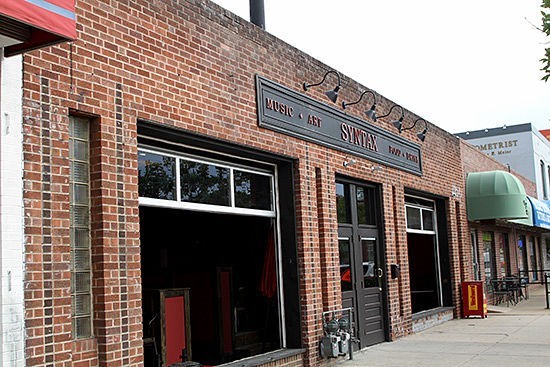 After running Syntax Physic Opera for five years, owner Jonathan Bitz sold his music venue and restaurant to California entrepreneur Paula Vrakas, who along with her co-managers, have run the Roxy in Encinitas since 2016. While her second outpost, dubbed Broadway Roxy, will celebrate its grand opening later this summer, the venue and restaurant is having a soft opening this week.

Broadway Roxy’s “dress rehearsal,” which runs from today, July 10, through Saturday, July 13, features live music as well as a preview of its menu, which includes pastrami sliders, falafel balls, a "kale-orado" salad, the signature falafel burger and a cocktail menu inspired by the 1920s, an era that also informs the spot's decor.

While there won't be a cover for live music this week (except on Saturday), Broadway Roxy is celebrating its dog-friendly patio by collecting donations at the door to benefit local no-kill animal shelter and adoption center MaxFund; 10 percent of food and beverage proceeds from Wednesday through Friday will also benefit the shelter.

The Hunter Roberts Trio performs from 7 to 11 p.m. tonight; there will be acoustic, soul and funk music on Thursday; and Friday’s entertainment includes sets by DJ Segue from 5 to 8 p.m., TurnStyle from 9 to 11 p.m. and Drop Logik at 11 p.m. Then on Saturday, Mile High Soul Club, a longtime fixture at Syntax Physic Opera, will start at 9 p.m., with the Kerry Pastine Combo opening at 7:30 p.m., all for a $7 cover.