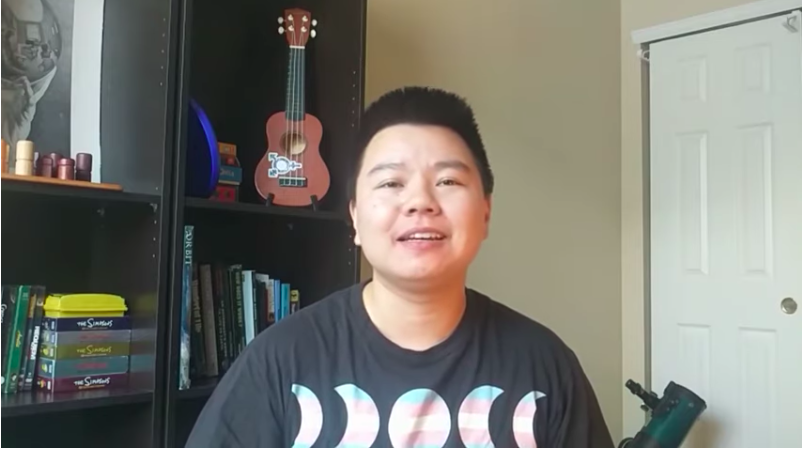 Sam Long
Sam Long made his case in an Out Astronaut Program video.
According to high school science teacher Sam Long, half the battle of teaching science is getting students to see themselves as scientists: "If you're a minority in any way and you don't see yourself reflected in the scientists you learn about at school, and you also aren't getting any positive push toward that at home, then you don't see yourself as a scientist, and you don't participate, you don't do as well, you don't feel a sense of belonging there."

Fortunately for Long, coming from a family of scientists did push him to consider a career in science, despite not seeing his identity as a Chinese-Canadian-American transgender man represented in the field. Now, Long hopes to diversify the predominantly Caucasian, cisgender and heterosexual landscape of the STEM world by becoming the first astronaut who's part of the LGBTQ community.

With the fiftieth anniversary of the Apollo 11 moon landing upon us, it's about time.

Long has never shied away from setting new precedents. While attending high school in Canada in the late 2000s, he was disappointed by the lack of school policy supporting or even acknowledging trans students. "The big things that came up for me were the daily issue of where should I use the bathroom," he recalls, "and the more sporadic issue of how do you participate in anything that's gender-segregated, like sports, overnight trips and uniforms. Even just — and this is not specific to trans people — anyone who goes by a different name, how do you make sure that they are called that name by their teachers, and that that's honored on the record? My school did a few things very wrong, which was that they didn't consult anyone with knowledge, and they didn't trust me as somebody that knew what I needed, either, because I was a minor."

The transgender flag overlaid with scientific objects.
Sam Long
During his first year of college, with the help of a human-rights legal support center in Ontario, Long sued his former high school. Not only was he retroactively fighting for reparations for his own experience, but he also wanted to change the school's rules.  As part of the settlement, Long consulted with school board officials to create what would become district policy on how to best protect and support transgender students. Though he moved to Denver after completing grad school in Canada, Long is proud to have left a legacy of change in his home town.

As an educator, Long continues to uphold that same spirit of inclusivity in the classroom. "When I teach about biology, I have areas like genetics, reproduction and evolution, and if you teach it the way an old textbook does, you're going to say things that are inadvertently very erasing and very alienating of LGBTQ identities," he says. "When you talk about the male-female binary and XX and XY chromosomes, the fact that we reproduce to pass on our genes, there are real and exciting and scientifically accurate ways to talk about that that affirm and celebrate diversity. But that doesn't happen unless you make that concerted effort to do that. Coming from a past of, 'Science is for the best and brightest, science is objective and there is no room for your identity there,' we're moving into 'Science is for everybody, and identity matters.'"

Along with Lewis Maday-Travis, a middle-school science teacher in Seattle, Long has started a training program for teachers called "Growing a Gender-Inclusive Biology Curriculum," introducing it to other educators at conferences.

Lewis Maday-Travis and Sam Long present their "Growing a Gender-Inclusive Biology Curriculum" at a conference.
Sam Long
While he praises events like the Women in STEM conference at Metropolitan State University of Denver (he took a group of his students there), Long wants to see a similar campaign to get queer youth interested in science. "Youth today aren't getting any messages that you can be a scientist and you can be LGBTQ," he notes. "They may see some women scientists and racial minorities get coverage, but there hasn't been any push to say, 'Queer and trans people can be scientists.'"

Long did find a large community of queer scientists on Twitter under the hashtag #LGBTSTEM, however, which led him to discover the Out Astronaut Project. After learning that teaching is a qualifying experience for NASA, Long set on space exploration as his next big goal. Becoming an astronaut was not a desire he had previously voiced. "Even though a dream is just a dream, it takes a certain amount of confidence and a certain amount of belief for someone to even say that," he says. "For me — and I'm thinking for a lot of LGBTQ young people — when you're in a position where you're not sure about your stability, your safety, your identity, your family, thinking about what you want to be is not really at the forefront." But now Long has started taking steps toward making his astronaut dream a reality.

Without a Ph.D. or military experience (over 90 percent of those who become astronauts do so through the military), the possible routes to becoming an astronaut are limited. Enter the Out Astronaut Project, a collaboration between Stardom Space and Project PoSSUM that provides grants to LGBTQ students pursuing professions in space-related fields. Of the 561 astronauts and cosmonauts who have traveled to space, none have openly been part of the LGBTQ community; more than 40 percent of the LGBTQ folx in STEM fields are not "out," according to Out Astronaut Project estimates. Sally Ride, the first female astronaut, came out in her obituary after she passed away.

In addition to teaching, Long plays in the Mile High Freedom Band and TBD (Tranz Boys of Denver).
Sam Long
To raise the visibility of queer scientists, the Out Astronaut Project has introduced a three-phase competition with the goal of getting an LGBTQ scientist to space. The first phase will send one winner to the Advanced PoSSUM Academy this fall for training. The second phase will send four individuals, including the Phase One winner, to the IIAS Applied Astronautics Program. In the third and final phase, the project will seek to sponsor one of those four on a research trip to space. Sam Long hopes to be the one.

Long already meets some of the qualifications: He's a science-minded academic who's part of the LGBTQ community, has residency in the U.S. and Canada, has completed a bachelor's degree, and falls in the suitable age range. And over the past two years, he's been working hard to meet NASA's physical requirements to go into space. He considers the required fitness and swim tests to be the most daunting part of his journey. "The experience for me, and some other trans people, is that it's complicated to accept your body, and to do anything that would require focus on it," he explains. "I had never gone to the gym before or taken part in any athletics, really — not because it would be difficult physically, but because it would require me to think of my physical self in a different way. And then swimming, especially, is an activity that makes you vulnerable because you're exposing more of your body, and if you're learning to swim like I was, you're in a lot of danger compared to learning how to do any other sport.

"So I had a lot of fear of that, and if it weren't for this goal of becoming an astronaut, I don't think anything else would have made me confront that," he continues. "It's such a simple thing, but for me it was a mental barrier to overcome. And this was exactly the right reason to overcome that."

While teaching at Strive Prep Excel, Long was a staff sponsor for the Gay-Straight Alliance.
Sam Long
Long has shared his challenges with his students, in hopes of inspiring them to overcome their own mental barriers. Fifty years after Apollo 11 touched down on the moon, sending an openly queer person into space would make history again, rewriting the narrative of who gets to be not only a scientist, but an American icon, as well.

Long launched his campaign to win the Out Astronaut Program contest with a YouTube video entry that went live this week. His proposed research project calls for studying how well 3D-printed materials hold up under space conditions, gathering information that could potentially enable astronauts to 3D-print tools and spare parts while in space. The contest is accepting entries through the end of July, and voting will take place during August, when you can vote for a candidate once a day. The winner will be announced on September 8.

"Traditionally, astronauts have been chosen for being a good fit with their skills, their temperament, their personality — and also, whether it's official or not, I know that they're chosen because they are appropriate public figures," Long concludes. "So, for example, Sally Ride did not talk about being a lesbian when she was an active astronaut. But for me to achieve my goal and go to space would mean that not only were there hundreds and thousands of people who helped get me up there, but also that the public supports a trans astronaut. That would make me feel very seen and loved and supported."