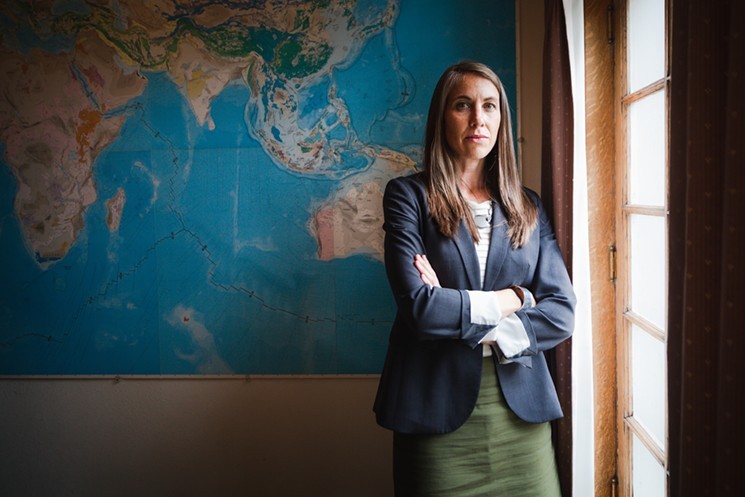 Jake Holschuh
Nina DiSalvo, an attorney with Towards Justice, was part of the legal team representing thousands of au pairs in their quest for better pay and working conditions.
A $65.5 million settlement reached in Denver's federal court this week is being hailed as a major step toward reforming the federal government's troubled au pair program, which brings young people from around the world — primarily women in their early twenties — to work as live-in nannies with American families for very modest pay.

As detailed in last year's Westword cover story, "The Nanny State," the program began as a feel-good "cultural exchange" exercise that was supposed to tout American values to foreign visitors. But critics say it's become a source of cheap child care, controlled by a fifteen private agencies that set wage rates and, for the most part, police themselves. A class-action lawsuit filed five years ago by the nonprofit Towards Justice on behalf of thousands of au pairs accused the agencies of colluding to keep pay low and exacting reprisals against workers who complain about the pay or spartan living conditions.

After legal costs and other expenses, the settlement approved this week will provide an average of $3,500 to approximately 10,000 au pairs who filed claims in the lawsuit. More important, perhaps, is a provision of the settlement that requires the sponsor agencies to inform au pairs and host families that they can negotiate higher wages than the minimum required by the federal government. Because room and board is included in the compensation, most agencies had set the wages at $4.35 an hour for 45 hours per week, 40 percent below the federal minimum wage — and there was evidence presented in the case that families and au pairs were told they weren't allowed to be paid more.

The settlement deal was struck earlier this year, on the eve of trial, but didn't receive final approval from U.S. District Judge Christine Arguello until July 17. It  doesn't resolve some of the thornier issues about how au pairs are paid and treated — for instance, whether those in states that require minimum wages higher than the federal minimum (such as Colorado) should be paid more. Or whether the system for reporting abuse and exploitation should be overhauled, or  whether the requirements for some minimal component of genuine "cultural exchange" should be enhanced.

But the ability to negotiate a higher wage gives the au pairs something they haven't had in their dealings with American employers to date: leverage.