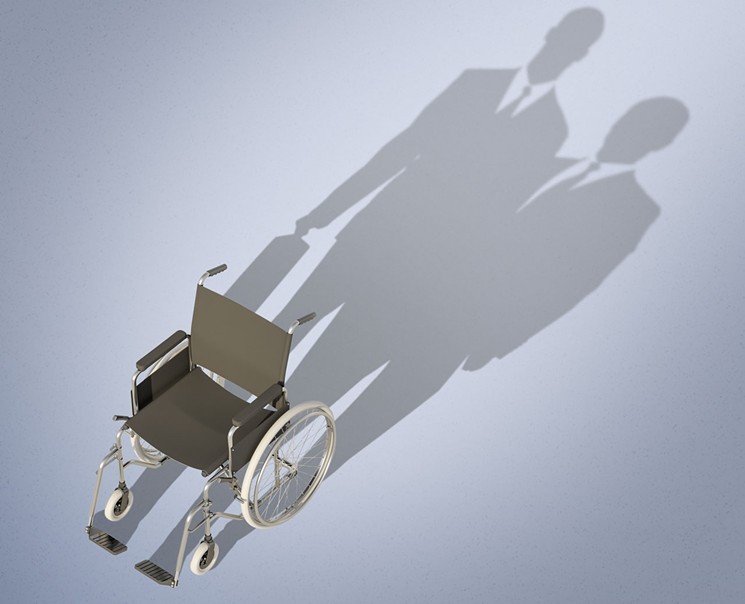 Getty Images/Westword illustration
Bailey's Riverbend Eatery has been embroiled in an Americans With Disabilities Act lawsuit that the restaurant owner claims was filed by someone who never actually visited the restaurant...or may not exist at all.

“No one has produced anything to show that he’s an actual person,” Courtenay Patterson, the lawyer representing Riverbend owner Michael Abbondanza, told us when we published our cover story on the case in June. “I just don’t think this guy is real.”

The plaintiff, Florida resident Santiago Abreu, had filed dozens of similar cases in Colorado, but had never appeared in person to give a deposition in any of them. The Internet contained some evidence that he existed, though: a 2014 bankruptcy filing and voter registration records tied to a man named Santiago Abreu, who lived in West Palm Beach, Florida. Even so, Abbondanza says there were so many errors in Abreu's original ADA complaint about the restaurant that it seemed like the plaintiff had never visited the place.

On July 24, attorneys representing the Florida-based lawyers who filed Abreu's original complaint submitted a filing in federal court in Colorado that included a photograph of a man in a motorized wheelchair who they say is Abreu, as well as a photo of his ID. There's also a picture that combines the two, but the man's face is blacked out in all of the photos. Abreu's address and date of birth are also blacked out on the ID, which lists him as 5'10".

Along with the photographs, the lawyers submitted an affidavit from a Florida attorney, attesting to the fact that the attorney took these photos of Abreu. The affidavit includes Abreu's Social Security number and a list of his disabilities, though these are also redacted.

Lawyers have submitted these photos of a man named Santiago Abreu to federal court.
Public Access to Court Electronic Records
"To me, this doesn’t prove anything," Patterson says. "The whole thing is very suspicious."

In their filing, the attorneys ask that unredacted versions of the photos be labeled for "attorneys' eyes only." If the court grants that request, Patterson would be able to see the complete pictures, but Abbondanza would not. Patterson plans to file a motion to oppose that on July 26, arguing that if her client can't see the documents in full, then the evidence shouldn't be considered admissible.

One reason that the lawyers are asking for "attorneys' eyes only" may be the media attention that this case has attracted. "Plaintiffs and their counsel have already publicized this lawsuit both on-line and on television," writes Denver-based lawyer Michael Hutchinson in the filing. "Mr. Abreu’s confidential information deserves protection, and certainly protection from publication in the media."

(The Colorado-based attorneys who served as local counsel in Abreu's initial complaint are represented by different attorneys in the countersuit.)

The ramp leading into the Riverbend Eatery.
Conor McCormick-Cavanagh
Abreu's original lawsuit against Abbondanza's Riverbend Eatery is one of over 200 ADA complaints that he's filed across the country, including about seventy in Colorado. Business owners on the receiving end of these lawsuits have called them "drive-by lawsuits," a reference to the idea that some plaintiffs drive to one business, intentionally looking for ADA violations, then drive on to the next business. But disability-rights advocates say that most ADA lawsuits are legitimate, and they applaud the testers who drive from place to place to identify ADA violations.

Even if evidence ultimate proves that Abreu exists, Patterson says that the defendants should still be required to prove that he actually visited the Riverbend Eatery in July 2015, as Abrue claimed in the original ADA complaint. Abbondanza definitely has his doubts: If Abreu had really been to the restaurant, he would have known that the Riverbend has a wheelchair ramp. His initial complaint said that it did not. And there are other discrepancies in the Abreu saga that still concern Abbondanza's lawyer.

"I want photographs that show him actually here," Patterson says, "plane records and medical records about this guy that show his Social Security number and the condition that he says he suffers from."