Sarah McGill
Finley's is tiny but punches above its weight as a neighborhood pub.
Tiny Finley's Pub sits next door to a better-known Wash Park neighborhood staple, the Candlelight Tavern, so it sometimes gets overlooked — though not by neighbors and regulars. But missing out on Finley's would be a mistake, because it's a charming and welcoming little spot with some tasty food.

I met up with a friend at Finley's on a recent Thursday night and started with a beer from the long list of local brews, which is an emphasis here. I was hungry and went for the Irish nachos, which are a favorite of mine in any Irish bar. The nachos did not disappoint, with plenty of cheese, sour cream and corned beef on top of crispy housemade potato chips. Finley's has a reputation for consistently good food, with highlights including wings and burgers — in particular the Finley Burger, which Westword selected as one of the ten best burgers in town in 2017. This burger is notable for the tasty addition of short rib in the burger itself, and bacon and Bearnaise sauce on top. You can also get any of the dishes at Finley's to go though GrubHub, although eating at the pub with a beer in hand is always a better option than dinner on the couch out of a to-go container. 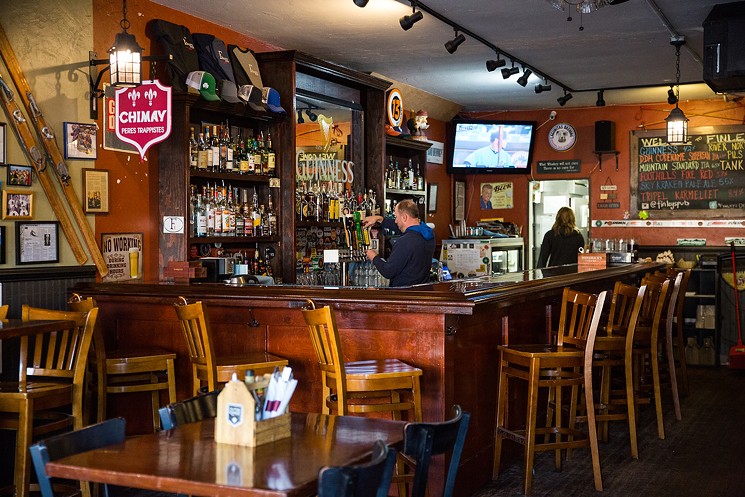 Finley's opened next door to the Candlelight Tavern in 2012.
Danielle Lirette
My friend and I were lucky enough to find room at the eight-seat bar, a perfect place to soak up the ambience. FInley's is small but not claustrophobic; there's a mirrored bar back (with a Guinness logo, of course), and dark-wood booths typical of any good Irish pub. The many obligatory Guinness ads and soccer jerseys are interspersed with photos of bar friends and family.

We met owner Pete VanItallie, who named his establishment after the Irish side of his family. He shared with me that his brother did a lot of research and even found the old Finley homestead in Ireland; there's a large photo of the historic buildings on one wall of the bar. VanItallie opened the place seven years ago where a Mexican restaurant had previously done business. Finley's and the Candlelight together make a tiny nightlife oasis in an otherwise residential block of Pearl Street.

VanItallie told us that the bar isn't much for big weekly events, but often does fundraisers for causes important to patrons. He's currently planning a breast cancer fundraiser in honor of customers who have been diagnosed with the disease. 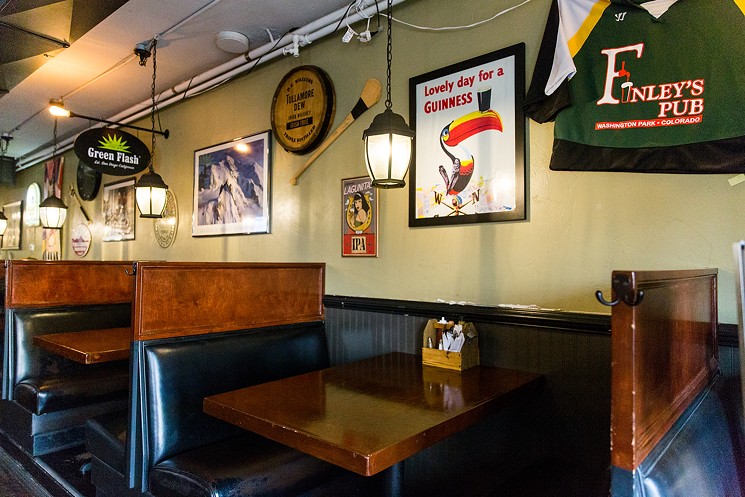 Finley's boasts the obligatory dark-wood booths of any Irish pub worth its Guinness.
Danielle Lirette
St. Patrick's Day and the winter holidays are celebrated with special beers and menu items. But most days of the week, things are simple here. Happy hour runs from 4 to 7 p.m., with specials that include $1 off drafts, $3.50 Guinness pours, and $2.75 well drinks.

During our visit, other customers were distributed around the booths and the bar, mostly older dudes that you might guess live in the neighborhood. One guy had a distinct English accent, adding one more touch of authenticity.

There was a larger group of younger guys and gals on the small but inviting front patio, who were there when we came in and still there when we left. Everyone in the place seemed to know one another; it's the sort of bar that people come to just to drink, eat and carry on conversations, rather than expecting games and entertainment. There are a few TVs in the room, but they are obviously not the focal point, just background noise during a good chat.

My friend and I were doing just that, enjoying catching up and talking about life; it had been a while since we'd seen each other. While I was set on those Irish nachos, she had her eye on the tiramisu ice cream cake, which proved to be light, fluffy, and just right to end the night.

The weeknight crowd at Finley's isn't known for being too raucous, and this one was starting to thin out around 10 p.m., so we took a cue from the departing customers, leaving with a smile and a wave from VanItallie and a new appreciation for Finley's, a quiet but hospitable Washington Park West gem.

Finley's Pub is located at 375 South Pearl Street. For hours, menus and other details visit finleysdenver.com or call the pub at 303-282-4790.