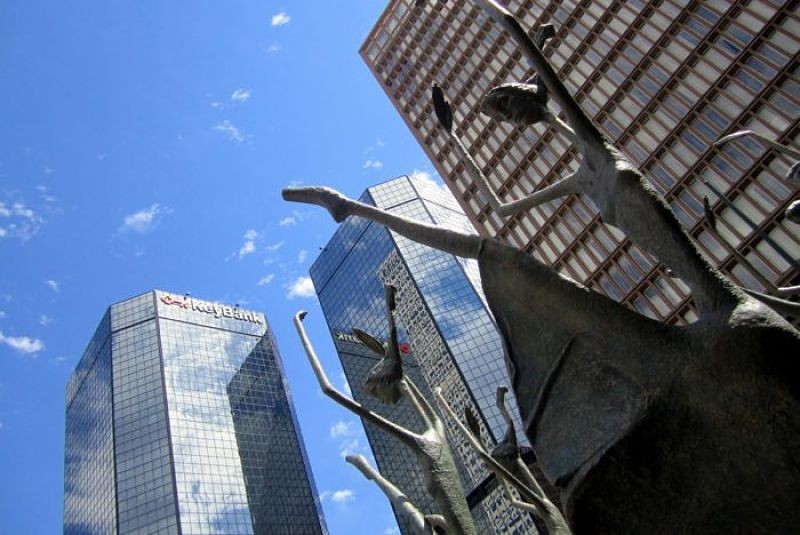 Wally Gobetz/flickr
Those hideous dancers are about to dance out of downtown. No, not the Jonathan Borofsky "Dancers," which have been startling passersby from their post in Sculpture Park off Speer Boulevard since 2003.

Denver's even more hideous dancers will soon be on the move: "Ballerinas," created by Ruth Keller Schweiss and installed in the heart of downtown in 1997. The sculptor described her creation as "an uplifting spirit in exultation" and a study of grace; in "The Five Ugliest Sculptures in Denver," Michael Paglia called it "cheap bits of kitsch masquerading as monumental sculpture."

Zeckendorf Plaza
Adding insult to injury, "Ballerinas" was a consolation prize for losing the I.M. Pei-designed hyperbolic paraboloid at Zeckendorf Plaza. Constructed in 1960, decades before the 16th Street Mall (complete with Pei's pavers) cut through downtown, the paraboloid served as the entrance to the old May D&F department store.

But then St. Louis developer Fred Kummer not only persuaded the Denver Urban Renewal Authority to give him $25 million to build his Adam's Mark hotel, in 1995, he also got the city's permission to knock down the hyperbolic paraboloid, a world-class building, to expand that hotel. To fulfill Denver's 1-percent-for-art program, Kummer commissioned "Ballerinas."
It was no accident that Kummer rhymes with "bummer."

These "dancers aren't just crude and ugly," Paglia wrote. "They also remind us of one of the biggest failures of planning and leadership in the city's history."

Kummer is long gone; the hotel at 1550 Court Place has gone through various owners and today is the Sheraton Denver Downtown Hotel. As part of a planned $80 million transformation, on August 27 the hotel will host an announcement event where Tony Dunn, general manager of the Sheraton Denver Downtown, will talk about the renovation that will turn the 1,231-room hotel into the "new heartbeat of Denver's downtown."

It will not be a ballerina beat.

And so "Ballerinas" will be dressed appropriately for the announcement, when hotel officials will bid them adieu. The sculpture is moving to an as-yet-undisclosed location in the Art District on Santa Fe.