Mark Antonation
The old Govnr's Park sign is staying above the new Logan Street patio, and there will also be a Gov Park burger on the menu.
This past spring, the Governor's Park neighborhood got a new breakfast and lunch spot called Ivy on 7th, thanks to Craig Jones and Eric Hyatt, who also own Angelo's Taverna and Carboy Winery. And soon the rest of the plan will fall into place at the corner of Logan Street and East Seventh Avenue, where Jones and Hyatt took over the entire building that once held Lala's and Govnr's Park Tavern.

In addition to Ivy on 7th, a new Carboy Winery (the third for the company, after the Littleton original at 6885 South Santa Fe Drive, and an offshoot at 103 Main Street in Breckenridge) is nearly ready to open. There will be a small production facility (most of the winemaking takes place at the expanded Littleton address), as well as a barrel room, wine bar and retail shop. But there will also be a new restaurant called Logan Street with a menu designed by Ivy's executive chef, Rebecca Weitzman. 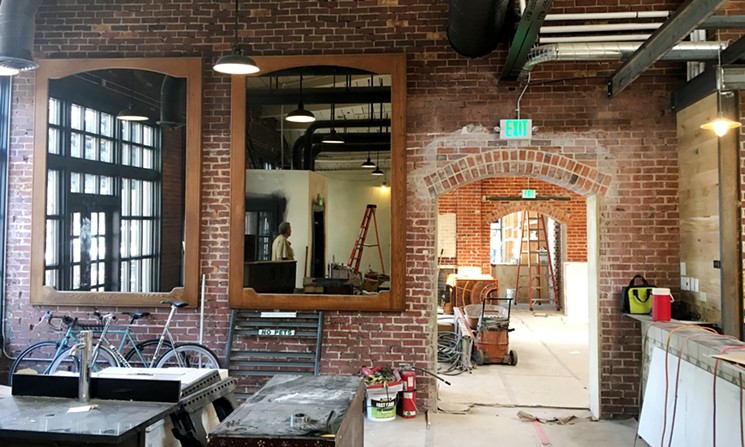 Looking from the Logan Street dining room into the Carboy retail shop.
Mark Antonation
Jones says the menu will lean toward Mediterranean to pair well with Carboy's wines, of which up to ten will be available on tap and in bottles, including some new sparkling wines. Expect wood-fired seafood, flatbreads, housemade pasta and shareable wine-friendly snacks. Jones says value is one of his key considerations, so entrees (even seafood and NY strips) will ring in at under $20, and grilled seafood small plates served à la carte will run $8 to $13.

"We like to have some theater behind the bar," Jones explains. "At Angelo's, the theater is oyster shucking. Here, we'll have wood-fired seafood so people sitting at the bar enjoying a football game will have a little something extra to watch." One of the few recognizable elements from the old Govnr's Park is the skylight, where an ancient palm tree grew. That palm tree is now located at Bang Up to the Elephant.
Mark Antonation
The entire space is considerably larger than the old Govnr's Park, since a vacant dry cleaner and real estate office were incorporated into the design, so there will be plenty of room for special events and private parties. The old Govnr's Park patio has also been expanded, perfect for sipping wine (or beer or cocktails, if you're so inclined). The south end of the building will be dedicated to private dining, and there will be a secluded courtyard at the back of that space. The Carboy wine bar is made from Douglas fir.
Mark Antonation
On the north end, the main Carboy wine bar will serve wine and a separate menu of small plates and charcuterie designed by Angelo's executive chef Scott Hybbeneth. All three spaces are linked by open doorways and also have their own separate entrances from the street. But each has its own ambience — and its own multi-tap bar. Logan Street's is a tile bar, Carboy's retail shop holds a brick bar, and the Carboy wine bar sports a bar made from 200-year-old Douglas fir.

For you wine aficionados, Carboy will continue to produce wines from grapes and grape juice procured in Colorado as well as other well-known wine-producing regions. The company also sources wines for blending and aging in its own cellars. New to the program will be sparkling wines made in both the Charmat method and Champagnoise method (the first undergoes secondary fermentation in the tank while the second is bottle-fermented). The middle section of the new space will hold the retail room, where guests can purchase bottles, fill growlers and sample wines. The bar in this room has arched brick windows looking into the barrel room.

Construction is going at a breakneck pace, and the company is actively hiring. But Jones expects to have the doors open to Carboy and Logan Street in about two weeks, and once that happens, the restaurant and wine bar will be open daily.