What's the Top Seller at A Taste of Colorado? 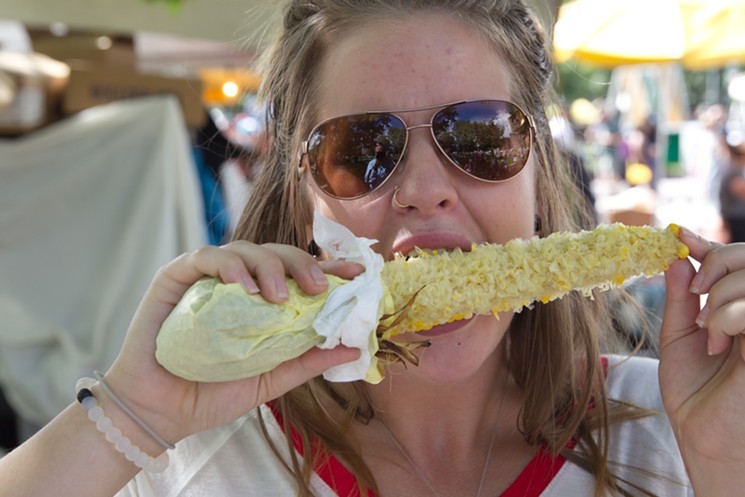 Brandon Marshall
Nope. Corn comes in second.
Over Labor Day weekend, Civic Center Park will once again host A Taste of Colorado, the end-of-summer festival that's become an institution since the Downtown Denver Partnership resurrected the Festival of Mountain and Plain, an annual celebration that debuted in 1895, sputtered along for a decade and then in 1912 ended for good...until 1983, when the Partnership revived the festival to mark the opening of the 16th Street Mall.

According to Sharon Alton, vice president of Downtown Experience for the Partnership, food offered at Taste continues to evolve, as organizers bring in "unique options that people wouldn’t otherwise get to experience." This year, for example, the Dough Bar has joined the lineup; a winner on Shark Tank for its protein-packed, baked, gluten-free doughnuts, the bakery moved from California to Fort Collins earlier this year. "Options like this give our festival attendees something new they can tell people about, which is what 'tasting' at A Taste of Colorado should be about."

Another evolution at Taste has been the paid-admission VIP space, which will boast a new vegan vendor and rolled ice cream vendor this year. When smaller restaurants can "dip their toe in the festival waters by serving to a smaller number of people in the VIP area," Alton explains, "they can see what’s necessary to ramp up their supply of food so that perhaps next year they can be in the park serving their unique food to the hundreds of thousands of people stopping by the restaurant booths throughout the weekend."

In addition to those booths, food trucks will also be on hand, serving everything from sandwiches to sushi.

Turkey legs: The winner and still the chomp.
Jake Shane
But for all the variety, there are a few constants at A Taste of Colorado. The bestseller is always the giant turkey legs. A close second? Corn on the cob.

Get a taste of Colorado this weekend. For the complete lineup, go to atasteofcolorado.com.