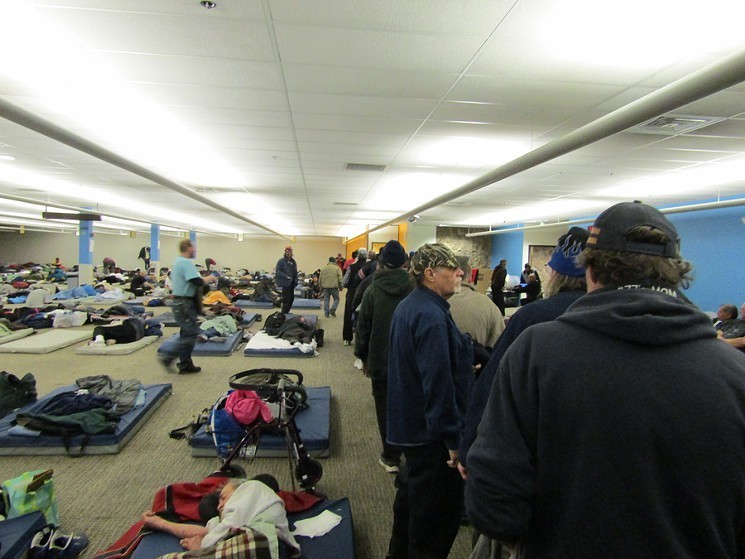 Chris Walker
Inside one of the city's now-closed emergency shelters.
The City of Denver intends to purchase the Crossroads homeless shelter from the Salvation Army. In a statement released today, August 23, Amy Fidelis, the interim director of marketing and communications for
Denver Human Services, says the city will lease the shelter back to the Salvation Army for three years so it can continue operations.

"The city’s purchase of Crossroads is critical to ensuring our residents experiencing homelessness have the support from our community to be healthy, housed and connected to the services they need," says Mayor Michael Hancock in the statement. "Our approach will continue to be one of compassion and dignity for our most vulnerable residents, and we’re proud to continue our partnership with The Salvation Army in driving towards a supportive care system that addresses individual needs and experiences."

Operational since 1993, the shelter in RiNo serves 400 men experiencing homelessness. Its future was in question after a Denver Fire Department inspection in 2017 found numerous violations relating to its fire sprinklers, ventilation, indoor porta-potties and emergency-exit pathways. Salvation Army spokeswoman Rachael Fowler says company representatives will elaborate on actions taken following the inspection during a press conference this afternoon, but offers this in the meantime: "We did complete most of the projects, and also completed several non-required projects to enhance the property for our nightly guests."

According to this year's point-in-time survey, in which volunteers count the number of people experiencing homelessness on a night in January, homelessness is up in the seven-county metro region. On January 28, volunteers counted 5,755 people living in shelters or on the streets in the seven-county region, up from 5,317 in 2018 and 5,116 in 2017. The vast majority of people experiencing homelessness — 4,809 — utilized emergency shelters and traditional housing, a 17 percent increase from last year.

Denver's handling of its homeless, including the controversial Hancock-backed urban camping ban, was a major point of contention in this year's mayoral election. During the race, Hancock announced the new Department of Housing and Homelessness, which would essentially fold city efforts to address the two issues under one roof.

The department, which launches early next year pending an executive order by Hancock or a citywide vote in November, has since been rebranded as the Department of Housing Stability. But advocates for the homeless remain hopeful that it's a step in the right direction.

"We've long advocated for the city to set a more clear strategy around homelessness and housing, recognizing that that's very difficult to do when the resources for addressing these issues are spread out among different entities," Cathy Alderman, the vice president of communications and public policy at the Colorado Coalition for the Homeless, told Westword in early August. "The streamlining of this department has a ton of potential to really get the city on a clear track toward addressing housing and homelessness in a more meaningful way."

Britta Fisher, Denver's chief housing officer who will lead the new department, calls the Crossroads acquisition a move toward achieving the department's ultimate goals. The city will purchase Crossroads for $10.5 million pending approval from Denver City Council; the first council committee hearing regarding the sale is scheduled for next week.

"The Crossroads location is critical for the community of people experiencing homelessness and can serve a variety of needs in the future for the city and the neighborhood," Fisher says. "This is an important step in implementing our three-year shelter plan."