Is the Swetsville Zoo Doomed to Extinction?

Anthony Camera
Bill Swets created one of Colorado's greatest roadside attractions.
One night back in 1985, Bill Swets was having trouble sleeping. A member of the Timnath volunteer fire department, he’d just returned from a horrific call, helping out at yet another accident scene that involved someone he knew from the rural area around southern Fort Collins, where his parents had bought a 120-acre farm in 1942, when Swets was just a baby. Now he had a family of his own, and though a dairy had been sold off years before, he still had the rest of the farm to run.

At 3 a.m., his mind spinning, Swets went into the barn he’d turned into a workshop and started welding together scrap metal. The result was “Buzzard George,” a bird with a shovel beak and a bicycle-frame body that stands just under three feet tall.

That was the start of the metal menagerie that became the Swetsville Zoo, an amazing roadside attraction that Swets opened soon after he started putting all of those sleepless nights to use.  Today what remains of the Swets family farm — 36 acres just south of Harmony Road, a few minutes east of Interstate 25, right along the Poudre River — houses 180 sculptures made by Swets, many of them massive creatures that dwarf his first creation, others marvels of movement, all of them miracles of ingenuity. Using pieces of old farm machinery and auto parts and other random items, Swets created everything from a ten-seat bicycle to giant dinosaurs (lots of dinosaurs) to rockets to a vase filled with flowers and covered with hubcaps that spin.

He outfitted a special trailer, “Dream Machine,” so that he and his wife, Sandy, could travel; their first trip was to the Mayo Clinic in 1996, seeking help for repercussions of her back surgery decades before. By the time Sandy passed away a dozen years later, they’d put 50,000 miles on that trailer. “We had a 51-and-a-half-year honeymoon,” Swets says. Other fantasy vehicles, like the Autosaurus II, still come out occasionally for parades. He even has a locked garage full of classic cars.

But the main attractions are all on public display, and a lot of the public has been showing up this month, since Swets put the last of the property on the market for $10.5 million in late July. “It’s time,” he says. “It’s been in the back of my mind for a number of years.” 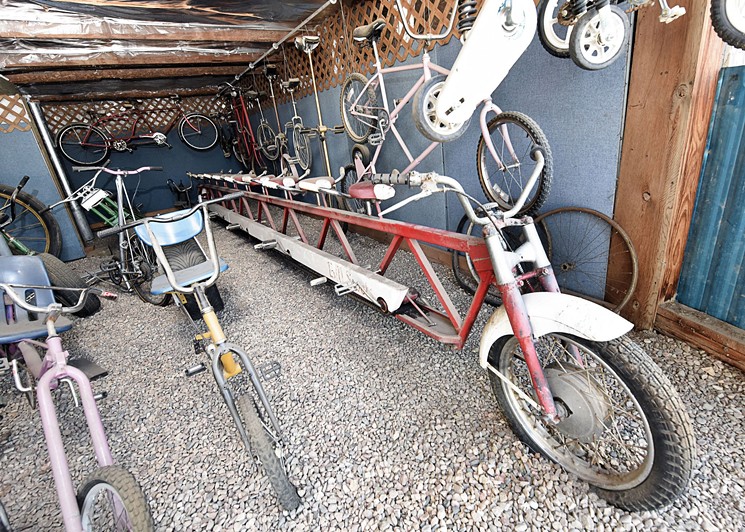 A bicycle built for ten.
Anthony Camera
He knows he’ll have no trouble selling the acreage. He sold off the land where that giant Costco was built next door five years ago. Indeed, what was once a rural retreat is increasingly urban. Traffic zips by along Harmony Road, which was just dirt when Swets was a boy. Developers are reportedly interested in building a hotel here, by the banks of the river.

What Swets doesn’t know is what will happen to the creatures in the Swetsville Zoo. He’s had plenty of interest in them, but he wants to keep this collection together. Timnath bought some statues a decade ago, when he first considered closing the place. Another eighty are already ensconced in his trailer park near Brownsville, Texas, where he met his new companion, Diane Tribble, whose husband died several years ago. “We’ve had a year-and-a-half honeymoon,” he says.

But breaking up with the Swetsville Zoo won’t be easy. The place has always been open, except for a few days in the late ’90s when a visitor tossed a cigarette butt at the flower fountain and caused a fire at the house that Swets had turned into a castle for Sandy. For more than three decades, people have been welcome to drive in, park and wander during daylight hours. 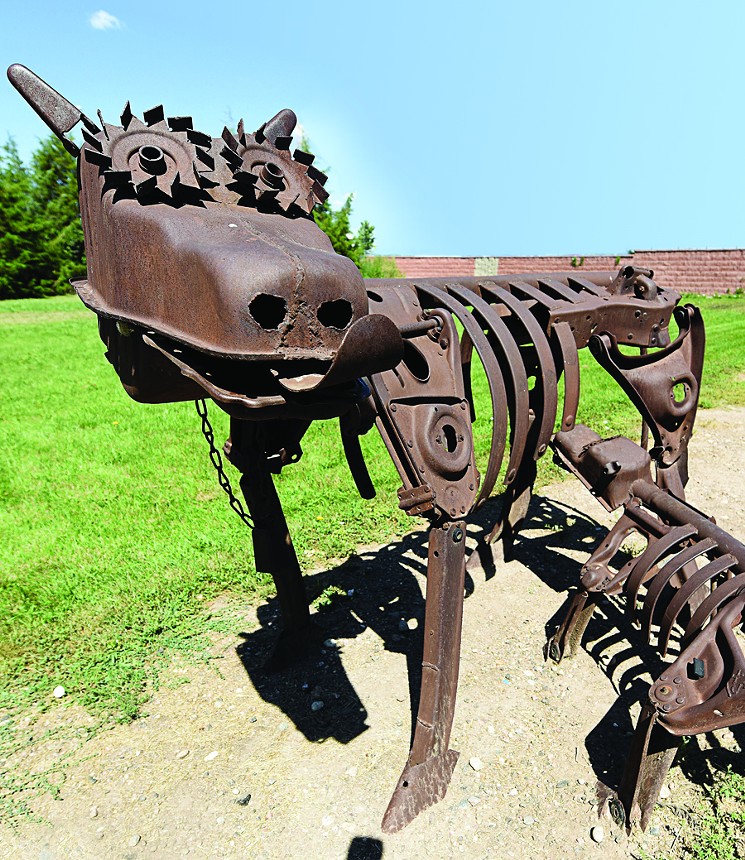 Mystery mother and child are part of the menagerie.
Anthony Camera
And wonder. “I don’t know how you come up with your ideas,” one visitor told Swets on the last Sunday in August, as cars kept pulling into the parking lot.

He had no training as an artist — he attended a twelve-student schoolhouse — and learned welding on the job on the farm. But his self-taught skills and the sheer scope of his collection have earned the Swetsville Zoo entries in everything from RoadsideAmerica.com to AtlasObscura.com, which calls it “a cross between a junkyard and a sculpture garden”; it definitely rates as one of the top ten roadside attractions in Colorado.

And even then, it’s almost impossible to conceive of how one man has created all this. The ideas for Swets’s sculptures come to him at night — some crazy, some sweet and some political, like the figure with the Pinocchio nose that wonders, “Who’s Monica?” There’s a weird Snoopy sitting on top of a doghouse, the skeleton of a dinosaur-like cow and her calf, fishermen angling in the Poudre, an old VW bug providing shade over a picnic table, a parade of giant ants marching into an open cooler. At every corner, there’s a surprise that supports the inscription on his “Worry Well” sculpture: “We want your visit here to be uplifting and happy so throw all of your worries, depression, hurtful thoughts, unpleasant moods, negative ideas, unhappiness, etc., etc. in here and enjoy yourself and everyone around you.” 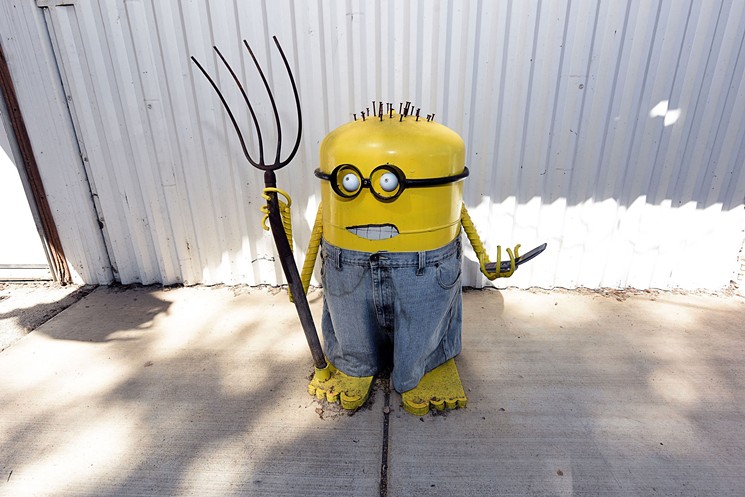 Bill Swets's most recent sculpture.
Anthony Camera
Swets has been slowing down lately. He made his last sculpture a year ago, a little Minion that stands near two twenty-foot-high dinosaurs. “I just don’t have the strength to bend metal into ribs,” he says, gesturing at the behemoths. He’s had some health issues and he’s hard of hearing; Diane often has to repeat questions. But he still has the energy to come out and talk to the people who visit his place and marvel at his creations.

For now, this place is a zoo.

The Swetsville Zoo, at 4801 East Harmony Road in Fort Collins, is open daily until around sundown. You can try calling 970-484-9509 (the voice on the recording belongs to Swets’s late wife, Sandy), but you’re unlikely to get an answer; just pull in, park and prepare to be amazed.