Jacqueline Collins
As more and more states legalize recreational cannabis, numerous studies investigate potential long-term effects, such as youth use and addiction. But one new study shows that puffing and passing carries a more immediate risk: a head cold.

That sharing pipes, bongs and joints would increase exposure to bacteria only makes sense, but research by a pipe accessory company, of all things, shows that our smoking pieces are likely covered with even more germs than we think. According to the study's results, widely shared pipes can have nearly 50 percent more bacteria on their mouthpieces than an average public toilet seat, and 90 percent more bacteria than the inside of an average dumpster.
Moose Labs visited two events in California that allowed social cannabis consumption, placing a pipe on a table that visitors could use. Around 100 people did at each event, with half of them also using a mouthpiece attachment and the other half using just the pipe. The pipes were then swabbed for bacteria, as were several other items at the events associated with germs, such as toilet seats, dog bowls and cell-phone screens.

The study also looked at more intimate smoking situations, though, and found that a ten-minute smoke session
between four people concluded with a smoking device carrying 600 times the germs it had before the session. 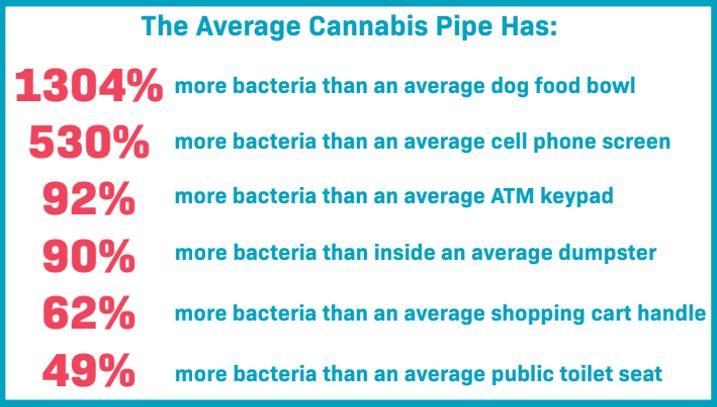 Courtesy of Moose Labs
"Many viruses and bacteria can be transmitted simply by sharing pipes amongst friends and roommates, not to mention being at a public event sharing with hundreds or thousands of people from different states and countries," the study's report reveals. "Viruses, such as influenza, can survive on surfaces for up to eight hours."

Researchers also used isophoric rubbing alcohol wipes to clean the pipes between users, and found that more than half of the bacteria still remained. The wipes were made available to users, too, but only 5 percent of them applied the wipe unprompted, according to the study.

It should be noted (and the study does) that not all bacteria is harmful, and the sheer number of bacteria, fungi and other germ colonies can seem much more dangerous than they really are. Dry cereal mixes can contain up to 100,000 bacteria colonies and still be considered safe for consumption by the Food and Drug Administration, and semi-annual reports of bacteria-infested mouthpieces on soda cans routinely show that having around 1,000 colonies of bacteria isn't reason for the vast majority of humans to worry.

But the study still brings up a point of concern, as social consumption businesses and events begin to open in states with legalized pot. Several cities in California have begun licensing events and establishments for cannabis use, while Colorado recently legalized a licensing system for consumption businesses as well. With community smoking accessories becoming more prevalent, the need for sanitary consumption will also rise, the study's authors conclude.

"While it is true that bacteria is all around us, most people tend to take preventative measures to avoid intentional contamination. Cannabis users seem to completely disregard common sense health and safety practices when it comes to consuming cannabis both in public and privately at home," the study's report concludes. "Any government or licensing board that is considering the viability of social consumption lounges or events should consider this study when implementing health and safety protocols and best practices."