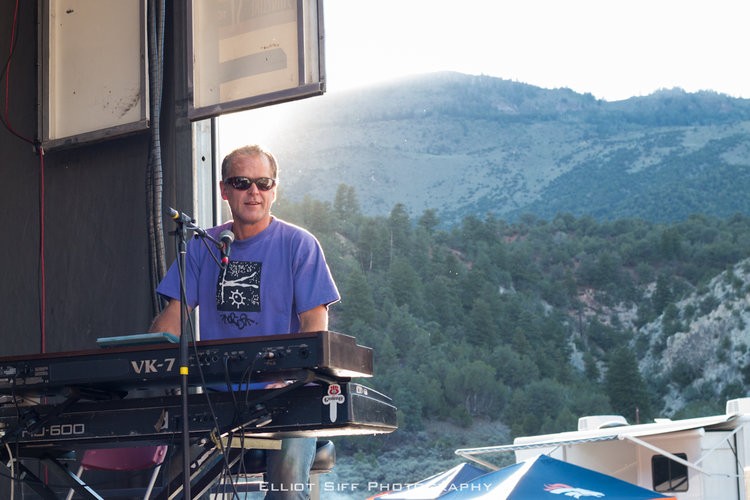 Elliot Siff Photgraphy
Bill McKay
As anyone who has taken in one of his performances might attest, Bill McKay, who garnered wide recognition during his years with Leftover Salmon, is one bad mamma jamma.

Drawing on influences that range from blues, funk, gospel and more, McKay possesses an unwavering ability to brings his chops to just about any musical situation — which he has done with a wide variety of acts over the past three decades on the Front Range and beyond.

As the soulful keyboardist hits the half-century mark, he is assembling a wrecking crew of his various musical compadres from over the years to mark his upcoming fiftieth and, as usual, to just jam.

Westword chatted with McKay about his upcoming birthday party at the Oriental Theater and his ongoing passion for life, friends, family and his craft.

Westword: Hey Bill, where am I getting you?

Bill McKay: I'm standing on a beach in Crescent City, California, which is at the northern tip of California just below Oregon. We've got a couple days off [from a tour with Coral Creek], so we're out here fishing with the RV.

Cool, so what's coming up at the Oriental?

Well, it's pretty exciting, I guess. I'm turning fifty. The show is on my actual birthday, September 25, which falls on a Wednesday. I've invited a lot of people. We're going to start out with a set of some acoustic stuff featuring me and my brother, John, and then I'll play a set with me and my other project, which we call the Chill Duo, with Channing Lynn. She plays clarinet, saxophone and banjo.


At some point in the night I'm also planning on playing some solo piano before doing a Coral Creek set along with a bluegrass portion of the evening, which will be run by Chris Thompson from Coral Creek. It'll be a bluegrass pick kind of thing.

After that, we're going to have a combination of the Bill McKay Band and the True Blue Band play. I've got the bassist Todd Smallie coming, who used to play with me in the Derek Trucks Band. I'll probably have some of the local people from my Band Du Jour days as well and other people from my different eras, including some of the guys from the Brothers Keeper band from Vail and the various other projects I've played with in Denver, such as the Other Brothers, which is an Allman Brothers tribute band.

The Steely Dead guys will also be there, as will the guys from DeadPhish Orchestra. And Bobby Messano, who is a great blues artist and who has played for Steve Winwood among others, has confirmed that he'll be there.

My longtime guitarist Ash Ganley will definitely be there. And we're going to have some horns, too. Maybe some of the guys from Whitewater Ramble will join in, and you never know who else could show up. I'm trying to make sure I haven't forgotten anyone. It should be a fun and interesting night of music celebrating my birthday and celebrating 32 years of my time on the Colorado scene.

How are you feeling as you turn fifty?

Well, I'm sitting on this beach in northern California, and I'm watching people surf, and there's a pier sticking out, and we had a bunch of seafood last night, and it's absolutely gorgeous. I'm out here on tour with Coral Creek. We're heading to Oregon soon, and then heading back through Idaho. I'm not on the road too much these days, but this is nice.

Some days I feel like I'm fifty, and other days I feel like I'm more like 25. Sitting out here with the breeze blowing, listening to the ocean and watching people, I feel young at heart. I feel good. I feel like I could play music for another thirty years. My son is about to turn twelve, and my little girl is six. I get along very well with my ex-wife, Stevane Bowers McKay, and I think we're doing a good job of raising our kids. I have a lot love of and respect for her and her family.

It's not necessarily where I pictured myself at this point in my life, but it is what it is. It's an interesting life, and I'm enjoying it. I'm grateful to be where I am. I pray to the great creator on a daily basis to give thanks and blessings for the life I have and for my children, for the ability to play music and put smiles on people's faces, and I'm an extremely grateful human being to be turning fifty and to be in the shape that I'm in.