denverbcycle.com
One of the new B-cycle e-bikes on the road.
Beginning today, September 16, those ubiquitous electric scooters, which remain enormously popular in Denver despite grumbling from some residents and safety concerns amplified by the first death of a rider last month, won't be the only e-transportation option in town.

Denver Bike Sharing, the nonprofit that operates Denver B-cycle, is launching a pilot program to provide e-bikes for rent at select locations around the city.

Even though Denver Bike Sharing executive director Mike Pletsch acknowledges that B-cycle usage has fallen of late, he stresses that the new project, which is scheduled to run through the end of October, shouldn't be seen as a tactic to steal customers from for-profit e-scooter providers such as Lyft.

"I'm glad scooters are out there," Pletsch says. "I wish people would use them safely — that they would wear helmets, use bike lanes and be safe and courteous to folks. But Denver needs to provide other micro-mobility options for people to move around, and every reduction of single-occupant vehicles is great. So we view scooters as a complement to the Denver micro-mobility movement rather than competition."

Denver Bike Sharing's partner in the pilot program is Toronto-based Drop Mobility, whose rides are already available in Kansas City, where pedal-powered bikes and the e-versions are both part of the two-wheeled fleet. "They've been ramping up their exposure across the U.S. and Canada," Pletsch notes about the firm, "and they're a very nimble company. We're looking at this as not only how can we continue to serve the Denver community, but also how can we better serve the Denver community." 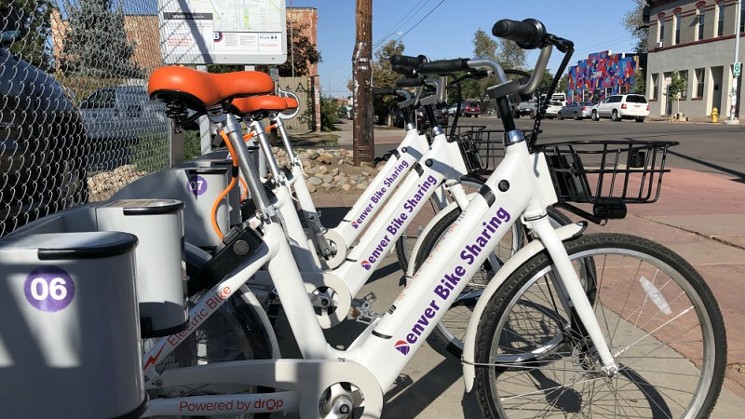 Denver B-cycle e-bikes at a docking station.
denverbcycle.com
This approach makes sense given the current state of Denver B-cycle. The concept will celebrate its tenth anniversary in April 2020 — an undeniably impressive achievement. But the statistics compiled in its most recent annual report are a bit soft in several categories. The number of annual memberships, listed at 2,171, is just over half the 4,023 in the peak year of 2013, and total trips by all available membership types dipped 11 percent from 2017 to 2018 despite being approximately three times larger than during Denver B-cycle's first twelve months.

"In the last few years, we've started to see a decline in ridership," Pletsch concedes, "and a lot of that was in the same time period as when folks started to have more options out there: car share, ride hailing, expanded train services from RTD. There are a lot of great things happening in Denver that kind of speak to our decline, but our mission is still the same, and we're very active in getting people to ride."

An example was the introduction in January of the 5280 Free Rides program, which provides a free Denver B-cycle annual pass to 5,280 Denver residents on a first-come, first-served basis. Even though there are still memberships available around eight months later (click for more details), Pletsch considers the offer to have been a success.

"We've been reviewing it, and we're excited to see that the program is actually meeting the goals it was created to meet, which was shifting some of the ridership toward commuting hours," he allows. "There's been a clear reduction of single-occupant vehicles, and that means a reduction in carbon emissions, too. It's been great to see so many people realize that they don't have to use their personal vehicle for every piece of movement they have to do around the city. That's a win-win for all of us."

He feels similarly about the prospect of other bike-share operators entering the fray in Denver. During a recent conversation with Westword, Patrick Quintana, market manager for Lyft in Colorado, highlighted the outfit's purchase last year of Motivate, which he describes as "the largest bike-share provider in the United States. About 80 percent of bike shares in the country happen on that app."

Denver B-cycle is partnering with Toronto's Drop Mobility on the e-bike pilot program.
denverbcycle.com
Quintana added, "Right now, B-cycle is the only dock-share system available in Denver, but we would definitely be interested in bringing bike share to Denver in a more robust fashion — working with the city to expand the footprint and the number of docks. We're a scooter business in Denver right now, but we'll continue to have discussions whenever they're available in the hope that at some point, we can bring our bike-share here, too."

As with Lyft scooters, Pletsch doesn't view for-profit bike share as a threat to Denver B-cycle's viability. "We have 89 stations right now, and we would certainly love to expand. If somebody would like to donate several million dollars to us, that would be great. But we know we're not able to serve the entire Denver community, and if there are some other for-profits who can do it safely and respectfully and can prove that they have a business model that works, that would be great. The more options we have to meet not only the city's goals, but also our own goals for health and safety, the better."

In the meantime, Pletsch is looking forward to seeing how Denver residents respond to the e-bikes. The motor on the devices switches off once riders hit 18 miles per hour, but like scooters, they can pick up speed very quickly. To help riders of traditional bikes negotiate this learning curve, B-cycle and Drop Mobility representatives will be available this morning "to talk to folks about that initial push," Pletsch says. "If you've never been on an e-bike before, it can be surprising. So we want to talk to them about riding safely, and we'll also have some helmets as a giveaway. We always encourage safe ridership, and with the e-bikes, we want to do it in a face-to-face manner as they're getting on the bike."

If people don't like the experience, Pletsch wants to hear about it as well. "This is a pilot program, and we're looking for feedback. We've been doing this for almost ten years, and it's very important to work with the community on how best we can serve them."

From 7 to 9 a.m. today and tomorrow, Monday and Tuesday, September 16 and 17, e-bikes will be available at the 17th and Wewatta station, with other locations switching regularly over the next several weeks. In addition, e-bikes can be rented from 4 to 6 p.m. at a variety of evening stations, 16th and Broadway among them. Click to read the complete schedule, as well as the Denver B-cycle 2018 annual report.