Frank & Salahuddin, LLC
A portrait of Spencer Erickson and a photo of him after he was attacked by a Lakewood police K-9.
Most recent cases of possible excessive force by Colorado police officers, including the ones related to De'Von Bailey and Allan George, have involved cops and guns. But a new lawsuit filed against the Lakewood Police Department revolves around a very different element: a police dog that tore into Spencer Erickson's neck while he was lying in his bed. He awakened just in time to see the K-9 lunging at his head, teeth bared.

To attorney Adam Frank, who represents Erickson in the complaint, the distinctions between these incidents aren't as large as they may seem at first blush.

"The standards for when officers are allowed to use force, including potentially deadly force, are the same no matter the weapon," Frank says. "All of the factors made it clear the officers weren't allowed to use any force. But they used deadly force — and they knew it was deadly."

This last comment is a reference to the past history of Finn, the police dog in question. In the Bailey homicide, one of the officers who fired into the nineteen-year-old's back as he ran away had been involved in an earlier fatal shooting of an unarmed suspect. Likewise, back in 2015, Finn had previously done grievous damage to his own trainer, attacking him so violently in the face that the officer missed around a month on the job.

When asked for comment about the complaint, Lakewood Police public-information officer John Romero, corresponding via email, wrote, "Because of pending litigation, we are not able to speak on the lawsuit at this time." However, he confirmed that "a use-of-force review was conducted and the use of a K-9 was found justified." He added that Finn and the six officers named in the complaint along with the City of Lakewood — Ryan O'Hayre, Edward Biggs, Justin Richards, Kennadee Bleak, Matthew Christensen and John Terrana — "are still on active duty." 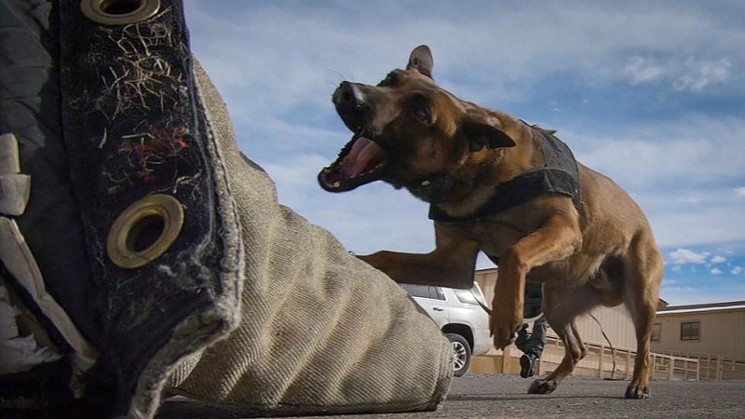 This photo of Lakewood Police K-9 Finn about to sink its teeth into a simulated "bad guy" was posted on the department's Facebook page in April.
Lakewood Police Department
Indeed, this past April, months after the attack on Erickson, Finn was spotlighted in the photo above, which was shared on the LPD's Facebook page. The caption on the shot, which remains online at this writing, reads: "So...anyone want to guess what Finn is thinking? Intense training day! Yes, he got his bad guy!"

According to Frank, his client didn't present the sort of threat that would have made the use of Finn necessary in the slightest way. "The Lakewood Police Department and its officers were going to serve low-level, non-violent warrants on Mr. Erickson. He has no history of violence, he has no violent charges, he has never resisted arrest. There's nothing that would give Lakewood the idea that they needed to go in full force. But they did it anyway."

The series of events took place at around 6:30 p.m. on September 21, 2018. The complaint notes that one of Erickson's two roommates (a pair of sisters) called 911 to say that he'd created a hole in the attic of their shared apartment, in the Hampden Villa complex at 7309 West Hampden Avenue, and was possibly in the crawlspace. She added that he likely consumed marijuana and vodka that day and had outstanding arrest warrants in his name. Turns out there were three: failure to appear in Denver court over a criminal mischief charge and possession of a controlled substance and DUI, plus a DUI matter out of Arapahoe County.

Frank stresses that Erickson hadn't been accused of violent behavior in any of these incidents, and the ceiling damage constituted "misdemeanor criminal mischief."

Nonetheless, he goes on, the LPD "responded in force: six officers, including the officer with the dog. They met with the roommate, who said, 'He's inside, there's this damage and he has warrants out.' So the officers get together and start talking about what they should do and how they should use the dog — and not one of the officers said, 'This is a bad idea.'"

To Frank, the absence of push-back about the dog "is why Lakewood is on the hook, as well. The officers thought about their training and when and how to use the dog, and they all agreed on it. They set up officers on the corners of the apartment building, as if they thought he was going to climb out a window or something, which is crazy. Then they called and texted him once, but he didn't respond — because he was asleep in his own house, in his own room. So when the police said, 'Come down or we're going to send in the dog,' he didn't hear, because he was asleep." 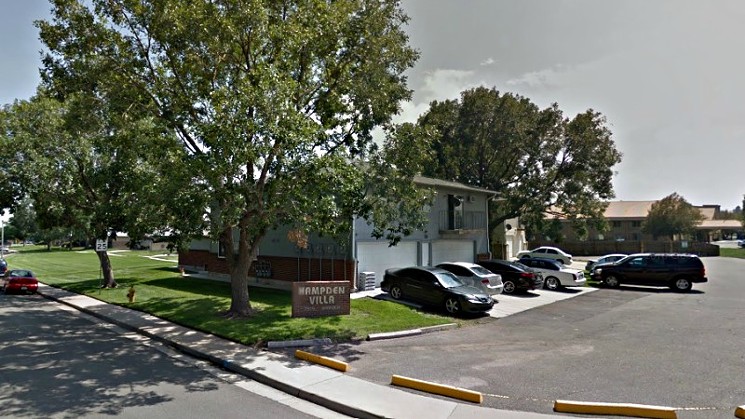 The Hampden Villa apartment complex in Lakewood, where the incident took place.
Google Maps
At that point, the strategy moved from the planning stage to implementation, Frank says. "They got permission from the roommate to go into the apartment. But instead of going in themselves, which would have made sense — that's standard policing, Police Work 101 — they decided to send in the dog. And they sent the dog in unsupervised. They didn't maintain a visual."

After exploring the first floor, the dog didn't find Erickson, "because he was upstairs in the bedroom, asleep," Frank explains. "So they sent him to the second floor, and again, they didn't maintain a visual. Mr. Erickson woke up to a bark, with the dog about two feet from his face — and then it attacked him."

The damage was startling, as is clear from post-injury photographs included in the lawsuit. Erickson suffered multiple lacerations, at least one of which measured in the range of six to seven centimeters in length and between five and 7.5 centimeters deep. "The muscles were torn in his neck, and his jugular vein was exposed," Frank maintains.

The injury is reminiscent of one K-9 Finn inflicted on Lakewood Police Agent Patrick Lone on August 18, 2015. CBS4 subsequently reported that Lone had been bitten on the face while playing the role of "agitator" during a training exercise. Lone had just returned to the job at the time of the station's story, dated September 21 of that year.

The continuing deployment of Finn after the Lone attack strikes Frank as negligent: "Lakewood kept using this dog, a dog that was known to do exactly what it did to Mr. Erickson — bite someone in the face when it wasn't supposed to, causing extremely serious injury." 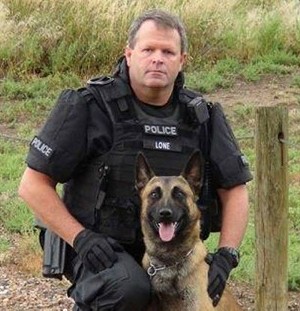 Lakewood Police Department Agent Patrick Lone seen posing with a different K-9 — not Finn.
Lakewood Police Department via CBS4
Erickson's wounds didn't convince Lakewood authorities to ease up on him. After his neck was sewn back together at an area hospital, he was incarcerated, and the bandages on his neck led to some uncomfortable conversations with fellow inmates. As Frank puts it, "Cutting someone's throat is typically done with snitches, and Mr. Erickson feared that's what people in jail would think — so he had to keep explaining what happened."

Meanwhile, he continues, prosecutors added more offenses to his roster. "They filed false charges against Mr. Erickson for obstructing a police officer and failure to leave a premises when a police officer requests. And they also up-charged the criminal mischief. The damage to the apartment was misdemeanor-level damage, but they charged it as a felony because he bled on the carpet, and they claimed that the blood he spurted out of his neck raised the amount of damage enough to make it a felony."

In the end, the beefs related to obstruction and carpet blood fell by the wayside when Erickson entered a single guilty plea for misdemeanor criminal mischief, and Frank says the issues over the outstanding warrants have been resolved, too. Erickson is currently on probation.

As for Erickson's current state of mind, "he's doing the best he can, doing all the things he's supposed to be doing and working on putting his life back together again. But it's hard. He has trouble sleeping, he has PTSD, and he has huge scarring on his neck that's a real piece of the mental-health aspect, because anyone who sees it assumes he either tried to commit suicide or was horribly attacked by someone. And physically, there are things he used to be able to do that he can't do. He feels pain a lot of times when he tries to lift something up, because the muscles in his neck won't respond the way they used to."

Granted, Erickson is alive, unlike Bailey and George, but it was a close call. "If the dog had gone millimeters deeper, Mr. Erickson would be dead," Frank emphasizes. "It's only by the grace of God that the dog didn't open up his jugular." He adds, "To me, it's just as if they went in, guns blazing — except maybe worse. The dog was like a heat-seeking missile. It was trained to attack and bite. So this was the absolutely expected, anticipatable consequence of their choice, and the officers made the choice to use the dog because that's what Lakewood trained them to do."