The Seven Best Events on the Culinary Calendar This Weekend 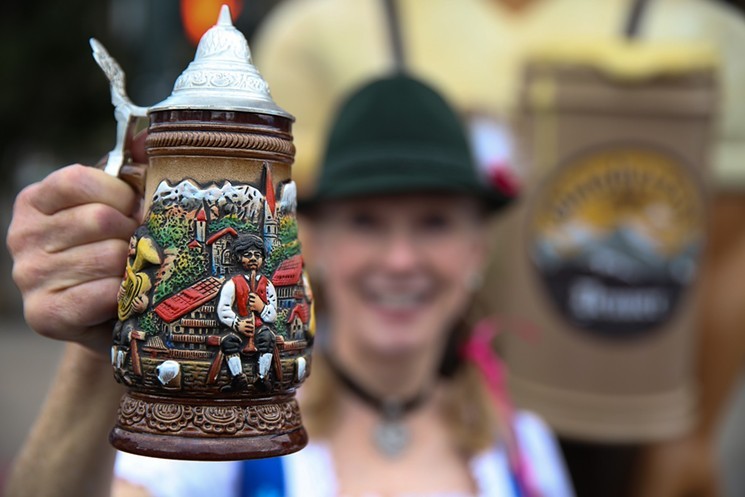 Brandon Marshall
Get outta town. No, really: After you toast the fiftieth anniversary of Denver's Oktoberfest, which opens today in the 2000 block of Larimer Street, head for Vail, Pueblo, Boulder, Longmont — hell, even Wheat Ridge and Westminster, which all have great food and drink happenings from Friday, September 20, through Sunday, September 22. Keep reading for a handful of events worth planning ahead for, too.

Friday, September 20
If you're like us, you spend most of September vowing to get up to the mountains to see the colors — only to be derailed by that bottle of wine in the fridge on Friday night, that new restaurant you've been meaning to try on Saturday and that ensuing hangover on Sunday. This year, plan ahead to combine all of your interests (drinking, dining and saying how much you enjoy the outdoors while you're indoors, safe from bear attacks) at the Vail Fall Food & Wine Classic on Friday, September 20, and Saturday, September 21. The weekend includes Friday night wine dinners at restaurants around town, followed by Saturday morning excursions like biking, berry picking and bakasana (and other yoga poses) before the grand tasting of scores of wines from more than fifty producers. Tickets for the grand tasting will run you $85 on Taste of Vail's website, but the satisfaction of knowing you've finally — finally! — made it to the mountains in time to see the aspen turn is priceless.

Are you really a Coloradan if you haven't loaded a giant, steamy, leaking plastic bag of roasted chiles into your car and driven home with the aroma of blistered chiles lodged in your sinuses and watery eyes? Answer: Hell, no. And from Friday, September 20, through Sunday, September 22, real Coloradans should head down south — not to New Mexico, dammit — to Pueblo, for its 25th annual Chiles & Frijoles Festival. The town's Union Avenue will be lined with farm stands, roasters, vendors, chef demos and live music, and don't miss the frijole-spitting contest (new this year), jalapeño-eating contest and Chihuahua parade. And if you've got the cojones (a lesser-known chile varietal) to put your chile recipe up against the region's best, enter Saturday's Chili [sic] & Salsa Competition, with just three categories: red, green and salsa (none of this white-chili nonsense). The fest opens at 3 p.m. Friday, with admission just $5. Find out more on the event website.

Germans are known equally for their beer and their strict adherence to rules of all sorts. This weekend, you can celebrate the one rule the famously conventional nation is happy to break: the rule of the Gregorian calendar. Starting on Friday, September 20, you can attend a (metric) ton of Oktoberfest celebrations around town. Of course, there's der Grossväter of them all, Denver Oktoberfest, which is going strong at half a century; read more about it in our beer calendar. But if you want to skip the massive crowds, you can hit up more intimate celebrations like Boulder and Longmont's parties, both of which start the polka music on Friday, September 20. Boulder Central Park, 1236 Canyon Boulevard, is hosting free festivities starting at 2 p.m. on Friday through 5 p.m. on Sunday; admission to the Longmont event at Roosevelt Park, 700 Longs Peak Avenue, will run you $15 for entry or $75 for bites and unlimited brews, with proceeds going to charitable causes. Doors open at 3 p.m., with a great music lineup through 10 p.m. Saturday. Prost!

Don't miss out on the Buen Provecho tasting hour, where chefs Dana Rodriguez and Sharif Villa Cruz will be cooking.
Linnea Covington
Saturday, September 21
If you prefer sweet to spicy, skip the chiles and go west, young man — to Wheat Ridge, for the Colorado Honey Festival. On Saturday, September 21, and Sunday, September 22, Four Seasons Farmers & Artisans Market, 7043 West 38th Avenue, is hosting two days of bee-centric programming, including workshops on how to start a hive, the benefits of honey, plants that will attract pollinators, and how to make your own beeswax chapstick. There will also be honey tastings and products for sale, including funnel cake with a decadent (take a deep breath, now) salted caramel-pecan honey butter. Most workshops are free, so make a beeline to the market's website for the details.

Little India has been satisfying Denver diners hungry for naan, bharta makhni, pakora and saag paneer over two decades now. And on Saturday, September 21, the restaurant is celebrating its 21st year in business by making its famed lunch buffet free from 11 a.m. to 3 p.m. That's right: Pile your plate with the good stuff (we mean samosas!) while listening to live music at the eatery's University of Denver location, 2390 South Downing Street. Details are up on Little India's Facebook page. Who says there's no such thing as a free lunch?

Westwood's Re:Vision co-op serves an overwhelmingly Latino neighborhood, so it's no surprise that the nine chefs cooking its second annual fundraising dinner, Buen Provecho, hail from Latino, immigrant and native backgrounds. Dana Rodriguez (Super Mega Bien), Sharif Villa Cruz (Mercantile), Edwin Sandoval (Xatrucho, Invisible City), Gustavo Mejia (Bang Up to the Elephant), Andrea Murdoch (Four Directions Cuisine), Matilde Garcia (Mujeres Emprendadoras), Jose Avila (X'tabai Yucateco), Damaris Ronkanan (founder of Cultura Craft Chocolate) and private chef Ocean Lopez will be putting on an epic feast on Saturday, September 21, and while seats at the dinner have already been snatched up like tacos at...well, wherever...you can still get in on the tasting hour from 5 to 6:15 p.m. You'll get nine apps — including pheasant chorizo, blue-corn tlacoyos and minature chapulines tostadas — and two cocktails and a great start to your Saturday night for just $40; tickets are still available on Eventbrite.


Sunday, September 22
What's your favorite food movie? The Trip? Eat Drink Man Woman? Jiro Dreams of Sushi? Maybe even Ratatouille? Sorry, food on film was done better — and earlier — in 1971's Willy Wonka & the Chocolate Factory. What better recipe for a celluloid classic than scrumpdiddilyumptious sets, a screenplay by the ill-tempered, macabre and deeply talented Roald Dahl and a frankly alarming performance by Gene Wilder? The Westminster outpost of Alamo Drafthouse, 8905 Westminster Boulevard, is throwing a candy-coated party for the cautionary tale on Sunday, September 22, with actors Paris Themmen (Mike Teavee) and Julie Dawn Cole (bad egg Veruca Salt) — who only narrowly made it out of the factory alive — in attendance for a Q&A after the film. Tickets for the two screenings, at 4 and 7 p.m., are $32.02 on Alamo's website.