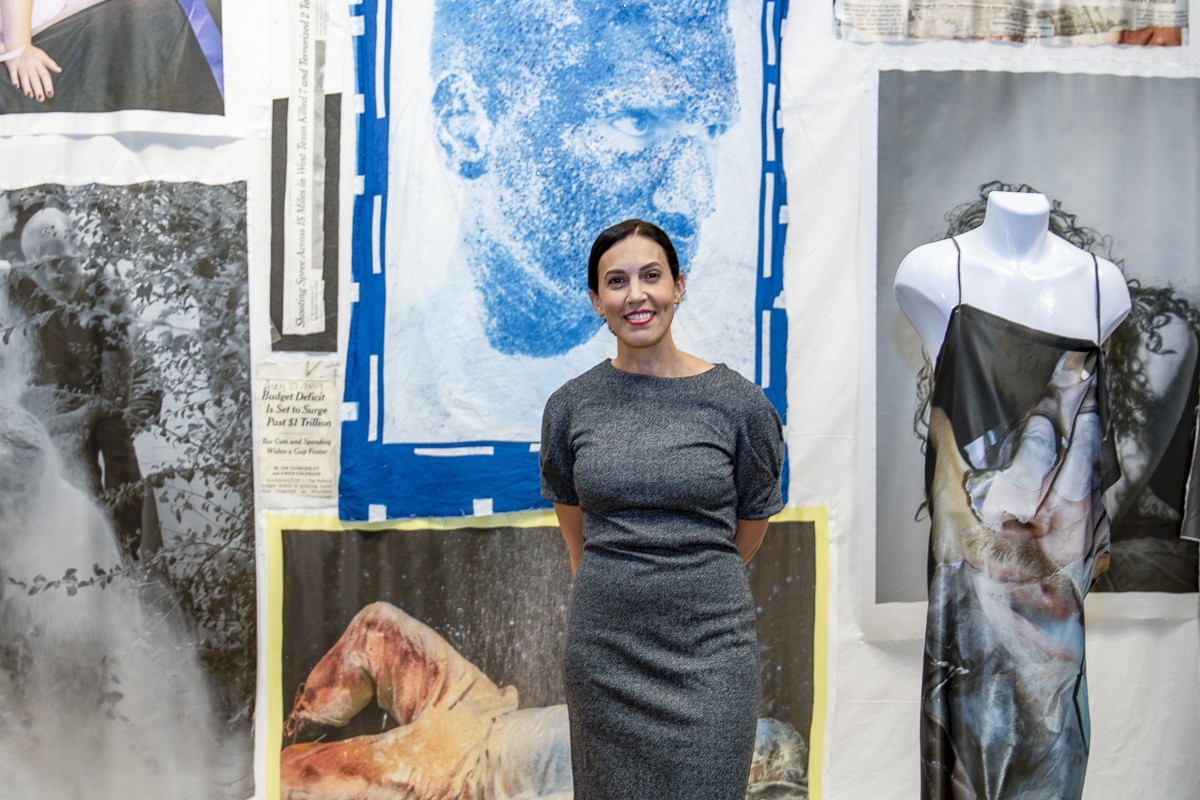 Chelsea Minter-Brindley
Sharifa Moore at Oliver Herring's opening for 31 Days, Emmanuel Gallery.
Photographer Sharifa Moore found her calling as a curator at the University of Colorado Denver, where she worked with Emmanuel Gallery director Jeff Lambson as an assistant and associate curator — a job she recently capped off by working with international artist Oliver Herring on his current installation, 31 Days. Now Moore is off to a new position, running the education program at the Center for the Arts Evergreen.

What drives this dynamo — a mother of three who earlier this year was named Outstanding Graduate of the Department of Visual Arts at CU Denver's College of Arts and Media? A lot, it turns out, as evidenced by her answers to the Colorado Creatives questionnaire.

Exterior view of the Next Stage Gallery showing the work of Melanie Walker from Whichcraft, curated by Sharifa Moore. The exhibition also included work by Mariana Vieira and Carol Golemboski.
Courtesy of Sharifa Moore
Westword: What (or who) is your creative muse?

Sharifa Moore: The word "muse" has a negative connotation for me, and I can’t frame the idea of a creative muse as a singular influence. I guess I would say that I feel compelled to work, and it is something that is almost obsessive. However, nothing exists in a vacuum. I have been surrounded by so many amazing mentors who have pushed me to think differently and to see outside of my own frame of reference, and it is an amalgam of people who inspire me and elevate the quality of what I’m able to accomplish.

This, oddly, is a very challenging question for me to answer because I have frequently entertained thoughts of strange parties mixed with people throughout history, although they always are wearing Bauhaus costumes despite their corresponding era, and we would all be dancing with Adrian Piper. So in addition to my closest gal friends, I’d invite Piper, Louise Bourgeois and Amy Poehler, but also maybe Elsa von Freytag-Loringhoven. Can this be like a genie wish where I get to invite unlimited people?

Sharifa Moore outdoors at Oliver Herring's opening for 31 Days, Emmanuel Gallery.
Chelsea Minter-Brindley
What’s the best thing about the local creative community in your field — and the worst?

The best thing about the local creative community in my field is that it is thriving, for the most part. Despite all of the negativity that currently exists in the world, creatives are finding innovative ways to communicate their ideas, and they are pushing to shift the narrative to one that is more diverse and representative of a wider audience. The worst thing about the local creative community is that there is and will always be more work to be done and many obstacles to overcome. There continue to be people who refuse to see outside their own demographic and are unable to relinquish control.

I think the work in Denver is reflective of the global creative community, but on a smaller scale. We are all connected and have a plethora of ways to access information at our fingertips. It feels as though people worldwide are communicating frustrations with inequality, political unrest and climate change, and we continue to see the ways that some of these conversations are still inherently problematic.

The Whitney Biennial immediately comes to mind as an example. The Biennial was curated by two women, included more than 50 percent women and featured many artists of color, while the institution fielded controversy over Warren Kanders and his connection to the gas canisters used by ICE at the Mexican border. The connection between mission, vision and money continually needs to be addressed.

As a curator, how would you size up the current climate in the local art world?

I’ve been pleased to see a variety of perspectives in the shows I’ve been attending in the last year. In the past, it seemed to be a lot of the same artists and even the same works, so I’m glad to see this changing. I’ve also been interested to see so many art-related events and pop-ups outside of the traditional exhibition space, and I think these spaces allow for creative thought and execution that can sometimes be more authentic and exciting.

I like to live one day at a time. Currently, I’m working to complete a mural project near my house which is still in the fundraising stage. I love art, and one of the things I am passionate about is getting to meet other artists and bearing witness to their ideas and passions — especially those who raise social consciousness. Every project is a dream if I am working with great people.

Denver (or Colorado), love it or leave it? What keeps you here — or makes you want to leave?

I am a Colorado native and grew up in south Denver. It's funny to me that I grew up wanting a bigger and more robust economy. Now that it has come to fruition, I am definitely feeling the pains with regard to the cost of living and resources available, specifically to creatives.

I am passionate about accessibility, and the climate in Colorado presents a challenge to think critically about how we want our city to grow and how we can create and share opportunities collectively. While I miss the unique flavor that was Denver, one of the things that I love about living here is the unpretentious nature of most of the people I get to work with. I frequently reach out to people whom I do not know, and I’ve been amazed by their willingness to collaborate. It is rare to be told “No,” and I think that is special to this city.

I have to name two people as my favorite Colorado Creatives. The first is Maria Buszek. Maria is an absolute rock star, and quite possibly one of the most productive people on the planet. She recently released a book titled A Companion to Feminist Art (with Hilary Robinson) while teaching full-time and producing lectures for her students on the level of a TED Talk, but also curating, collaborating and giving talks at other educational institutions. The second is Jeff Lambson. Jeff is an amazing person to work for, an incredible curator, and a person who leads without ego. Working for Jeff at the Emmanuel was one of the few working experiences I’ve had where I witnessed and enjoyed the ability to implement my ideas. They both deserve recognition for their positive influence in Denver. A small community wheat-paste piece that Sharifa Moore put up on the side of Vivian's Gourmet in Evergreen, featuring the work of Kellie Smith and Emily Owens.
Courtesy of Sharifa Moore
What's on your agenda in the coming year?

I just completed my work on Oliver Herring’s show at Emmanuel Gallery and have taken a new position as the director of education with the Center for the Arts in Evergreen. I have a running list of projects I want to implement, including new educational programming, public art, and community-building with kids and young adults. I’ve been reaching out to artists for potential collaboration and have had a great response. Outside of my job there, I plan to continue to seek opportunities to independently curate. In addition to all of this, I am exploring my own work outside of an academic structure and expanding on some ideas that were time-prohibitive in the past. One of these projects is a video performance piece with a bed of nails that I made in 2018.

I think that Black Cube Nomadic is definitely one to watch in the coming year. The Fulfillment Center is an absolute knockout. I was recently treated to a tour by Livy Onalee and continue to be impressed by Cortney Lane Stell. I’ve also enjoyed watching the rise of artists like Tya Alisa Anthony, Suchitra Mattai and Renluka Maharaj, and I’m thrilled to see that Nora Abrams is the new director of MCA Denver.

Recently, I went to the opening of counterART at RedLine, curated by Sammy Lee and Yang Wang, which was fantastic. Last but not least, Leah Diament, whom I met co-curating a show with Gary Reed and Jason Bye at Studio Altieri, which we were graciously permitted to use by the awesome Donna Altieri and Michael Thornton for Month of Photography. Leah has been incredibly active in the photo community as an artist and a curator, and is someone whom I believe will continue to gain recognition in the next year. Denver is home to so many intelligent and capable women in positions of power, and having all of these women to admire — and so many more not listed — is a gift. I’m sure they will continue to impress.

Oliver Herring: 31 Days, co-curated by Sharifa Moore, runs through December 14 at the Emmanuel Gallery, 1205 10th Street Plaza on the Auraria campus. The gallery is open from 10 a.m. to 5 p.m.weekdays. Learn more about Sharifa Moore and the Center for the Arts Evergreen online.