Mark Antonation
Osaka Ramen goes full-on Colorado with its green chile and chorizo ramen.
Japanese cooks are famous for honoring tradition and mastering dishes through years of practice, mindfulness and discipline. Wild experimentation doesn't exactly jibe with Western perceptions of Japanese culinary artistry. But then how did ramen jump from a Chinese specialty served in only a handful of Tokyo noodle bars about a century ago to a nationwide phenomena with many regional variations?

Even chefs devoted to faithfully reproducing a specific dish will consider customer tastes, locally available ingredients and cultural influences when creating a menu, so ramen evolved to suit the need of each city it spread to. Beyond that, contemporary cooks just couldn't stick to the classics and started turning out lamb ramen, clam ramen and even ham ramen.

That evolution continued once ramen came to American shores, and Denver chefs are happy to put their own spin on the broth, meats and toppings that make every bowl special. Here are three ramen bowls in local restaurants that satisfy our soupy needs — especially as Arctic conditions descend — while providing something unique in the realm of ramen.
click to enlarge 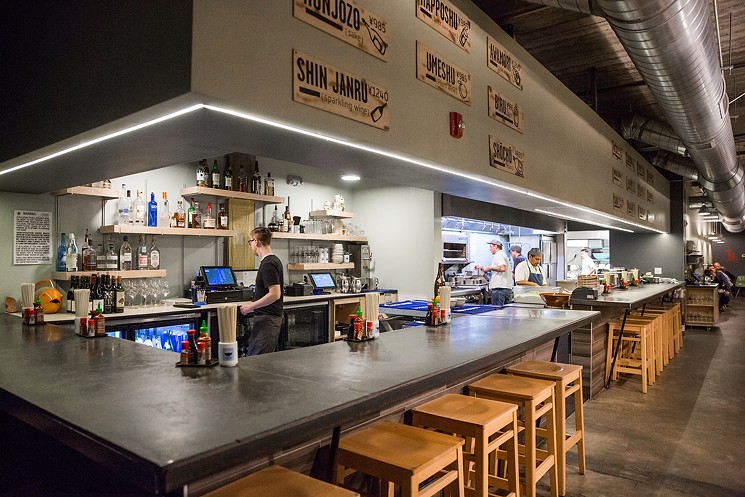 Belly up to the noodle bar at Osaka Ramen.
Danielle Lirette

2611 Walnut Street
303-955-7938
osakaramendenver.com
Osaka Ramen founder Jeff Osaka rolls out seasonal ramen dishes based on Colorado produce and meats. In the summer, Olathe sweet corn and butter ramen (a variation on a version not uncommon in northern Japan) draws its share of fans, but when fall arrives, the chef turns to another regional ingredient: green chiles. Right now (and for the next week or two), you can slurp down a bowl of green chile and chorizo ramen that's as hearty and satisfying as posole.

According to Osaka, the soup starts with chicken-based broth, which gets a fiery red slick of pork fat from Polidori chorizo. A generous fistful of diced green chiles is added, and then the noodle bowl is topped with shredded cabbage, cilantro and a hint of cotija cheese. The bright, fresh flavor of the green chiles mingles with the roasty red chile in the chorizo spice blend, creating Christmas in a bowl. While the special won't last, the restaurateur says his team is already plotting its next special, which could involve seafood. So if you miss out on the distinctly Southwestern fall ramen, you still have something fun and unusual to anticipate, along with Osaka Ramen's more traditional menu items. 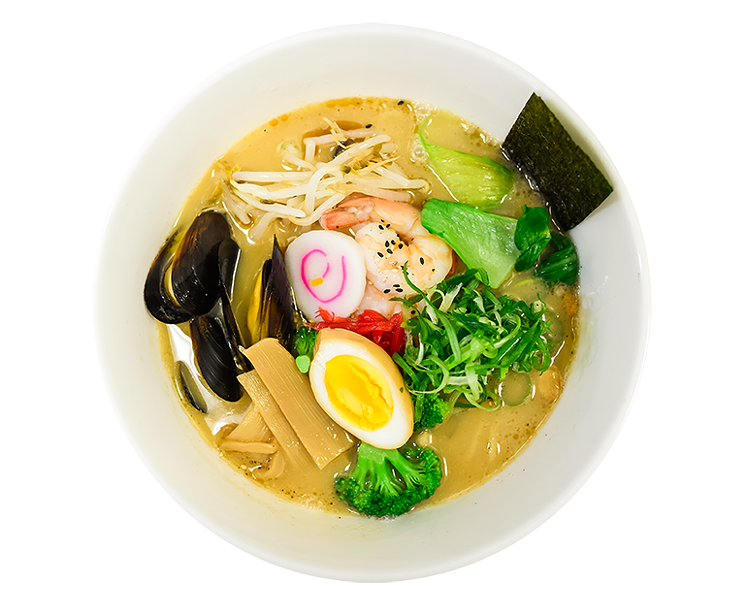 7939 East Arapahoe Road, Greenwood Village, 720-708-5477
450 Broadway (opening this month)
sukiyaramen.com
Sukiya Ramen has been hiding out in the back of a DTC shopping center for a few years now, ladling up satisfying bowls based on regional ramen specialties. The shop is exacting when it serves Hakata tonkotsu ramen in the style of Fukuoka, miso ramen from Sapporo and shoyu ramen from Tokyo, but the eatery is also happy to color outside the lines drawn by tradition.

And so you can order your tonkotsu (a cloudy broth made by boiling pork bones for hours) as Bloody Mary ramen, spiked with tomato sauce for an unusual flavor that adds both sweetness and acidity to the usual porky tonkotsu richness. Tomato-based ramen isn't unheard of in Japan, but it's not common, either, and in Denver it's a real rarity. But it will soon become a little more accessible, since Sukiya is opening a second location on Broadway in the Baker neighborhood this month.

Once you've downed your bowl of Bloody Mary ramen (don't expect celery stalks and olives), move on to curry tonkotsu, Nagasaki-style seafood ramen or spicy kimchi ramen. There's even a DIY option so that you can build your own bowl, which will surely have ramen purists choking on their noodles. 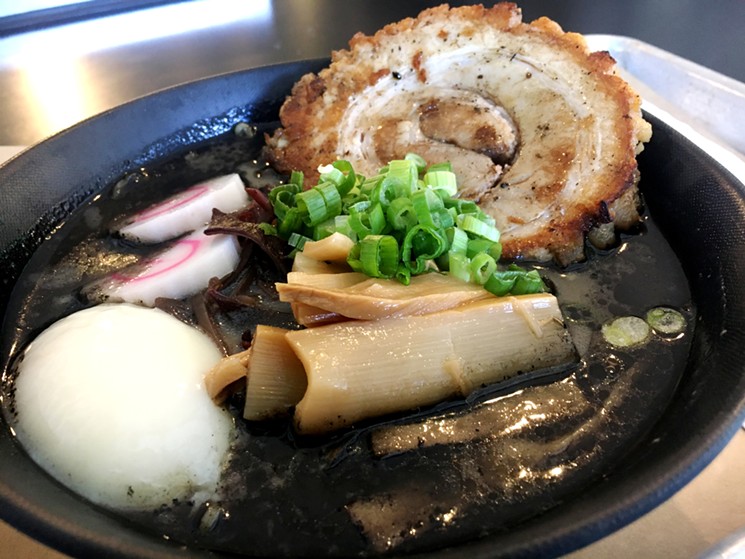 950 Broadway
720-390-7132
broadwaymarketdenver.com
Chef Jesusio Silva just opened Tora last month, but he's already challenging traditional notions of what ramen can and should be. But Silva isn't some rash young experimenter; he brings fifteen years of professional experience with Japanese cuisine, including stints at Sushi Sasa, Osaka Ramen and Sushi-Rama. So while some of his ideas are eye-opening, the flavors always come first.

That's definitely the case with Tora's black tonkotsu, which gets its deep, dark hue from squid-ink oil and black garlic. While the squid ink carries a barely-there seafood flavor, adding umami without being noticeably fishy, the garlic stands out boldly, matching well with the thick slab of pork, which is rolled and slow-cooked like Italian porchetta. Wood ear mushrooms, fermented bamboo shoots and naturo (the pink-and-white-swirled fish cake) add earthy, funky flavors to the mix.

Silva is just getting started, so expect more fun and flavor, possibly in the form of lamb posole ramen.