The 53-year-old property manager and real estate agent isn't a sex worker. She’s not pimping anybody. And Mile High Club Chalet, her string of two-hour-plus rentals for people looking to hook up, complies with the law. “It’s for people who want privacy and seclusion,” she explains. “We’re not providing services, because that’s illegal and dangerous.”

What she is, Grasmick insists, is a fixer.

On a tour of her units in sleepy residential neighborhoods circling the metro area, she’s interrupted every few minutes by a ringtone from a popular meme, a cartoon duck singing in an old bluesman’s voice: “I’m about to whip somebody’s ass.”

Her SUV swerves between lanes as she answers and solves whatever crisis has been called in. She makes sure one whiny tenant’s toilet is plunged. She helps a crying woman find a sanctuary for horses abandoned on her property. She pledges to file paperwork with the bank by the end of the day. She has a lot of projects besides Mile High Club Chalet, a business she founded almost accidentally.

In early 2019, Grasmick explains, a friend who was having an affair needed a place to hook up, so the realtor opened up one of her Airbnb properties for daytime trysts. The short-term rental unit soon became an even shorter-term hookup unit. Grasmick had found a problem to fix: People having affairs needed places to meet besides overpriced hotels and their own, problematic homes. Her solution was Mile High Club Chalet.

She began doing research — and promoting her business — at some of the area's sex clubs, from the Scarlet Ranch in Littleton, where everyday suburbanites cavort, to Mon Chalet on East Colfax Avenue in Aurora, a classic sex motel where couples and singles alike meet each other for a “walk on the wild side.” She hasn’t yet stopped by the Denver Swim Club or the Midtowne Spa, unsure of how she’d be received at the gay sex clubs — but she wants to find some way to reach gay men.

In its first year, her business has proven tough to market. She wanted to place ads on Ashley Madison, a website where married heterosexuals go to cheat, but the site doesn’t take advertisers. So she created a profile on various online dating apps, using them to market her club to young men between 25 and 40. (She's targeting that age group after being skeezed out by “geezers” who have insisted on things like scrotum stepping — which apparently involved a man lying under a cornhole box, sticking his sac through the hole and letting a woman stomp on it.) And she’s hired a PR person to promote her club, hoping journalists take notice and write flattering stories.

With several suites for rent in Denver, Aurora, Centennial and near City Park, she’s got plenty of slots to fill multiple times a day. Most of the units are nondescript on the outside. Neighbors walk their dogs, chat with their mail carriers and watch their children play, not realizing that just next door, spouses cheat, couples mingle and flames burn. 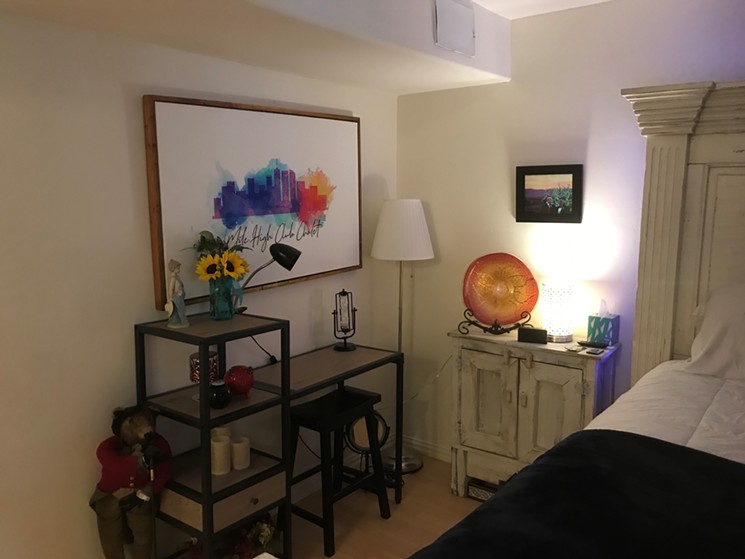 Grasmick's adult son, a computer wiz, has helped her with the website and is working with her to set up a place online where club members can meet and possibly find new hookups, then book their time at Mile High Club Chalet. Because no matter how nicely clients ask, no, she doesn’t provide services.

Currently, about half of her clients are friends or people she knows; the other half are strangers who've  contacted her online. Most are housewives and their lovers looking to get it on before picking up the kids from school; they pay anonymously through Venmo or other online platforms. Gramsick also hopes to draw in LGBTQ people, swingers, couples looking for a staycation and out-of-towners. Up to four people can stay in most of her units, though she hopes to open up larger spaces where clients can host parties.

Grasmick is particularly interested in luring in those twenty-somethings, though she’s discovered from her online marketing efforts that most men of that generation are too cheap or broke to pony up $60 for a two-hour tryst and would be just as happy canoodling in the car. That is, if they ever bother putting down their phones in order to meet someone in real life — which she’s not entirely sure they know how to do.

A group of friends and fellow entrepreneurs she drinks with called the Bottleneckers have even suggested that Grasmick open the space to sex therapists working with clients, as well as doctors looking for a comfy room for a mid-shift nap. Grasmick is open to whatever — as long as that whatever doesn’t involve minors or animals.

“It’s not just about the adulterers,” she adds. “It’s bigger than that.”