Who Are We Keeping It Juicy For? Doja Cat Outshines Tyga in Denver 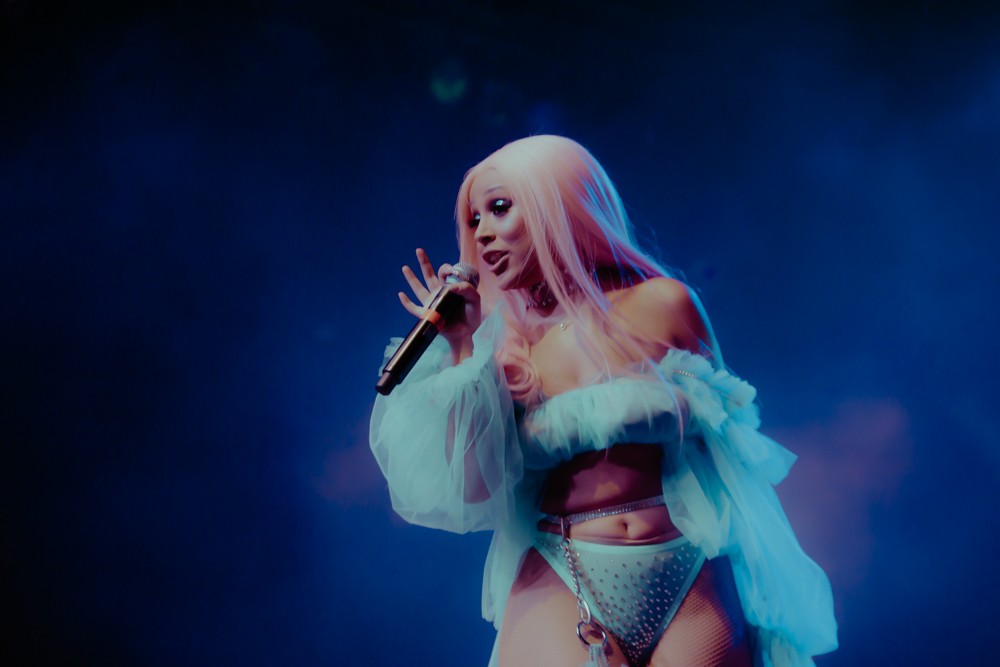 Brandon Johnson (@BJohnsonxAR)
Doja Cat opening for Tyga on Saturday, February 29, 2020, during KS107.5's sold-out Snow Show at the Fillmore Auditorium.
The song that brought hip-hop artists Doja Cat and Tyga together, “Juicy,” is a no-holds-barred ode to Doja’s ass. “I keep it juicy, juicy, I eat that lunch/She keep that booty, booty, she keep that plump,” Doja sings on the chorus. As a track off her first album, 2018's Amala, it’s a solo celebration of her own body; on the 2019 remix, Tyga affirms that, yes, her ass is great, and then mostly stays out of her way. It’s fun, it’s bold, and it’s fresh, so that’s what I was hoping for on Saturday, February 29, when Doja and Tyga took on the Fillmore Auditorium in Denver. But though Doja’s ass was prominently displayed as promised, the audience could have stood to see a little more of the rest of her. She went on stage too early and left too soon.

I’ll admit outright: Doja drew me to the show. Born Amalaratna Zandile Dlamini (her stage name comes from her dual love of weed and cats), she rose to stardom by releasing a DIY music video of her already parodical single “Mooo!” In it, she raps, “Bitch, I’m a cow, bitch I’m a cow,” while dressed in a cow costume, drinking milkshakes, eating hamburgers, sticking French fries in her nose like a walrus, and twerking in front of green-screen images of mostly animated farms. Seeing her live was a chance to pay homage to a pinnacle of third-wave feminist royalty who seamlessly merges the quirky and the sultry.

Tyga, for me, was an afterthought. I vaguely recalled his name from parentheticals in the titles of a few early 2010s hits. The rapper, born Micheal Ray Stevenson, has released seven albums, but he hits his musical stride in catchy, club-ready singles that spotlight popular Billboard hitmakers. Other than that, he’s also widely known for his on-and-off relationship with Kylie Jenner, and the occasional cringe-inducing stunt like illegally purchasing, then abandoning his own pet tiger.

Of course, put a tiger and a cat on stage together, and one will look a lot more dominant. In this case, though, it wasn't the tiger.

The sold-out KS107.5 show Saturday night proved the status quo arrangement doesn’t always cut it in a changing industry — especially when the cat is in fact a shape-shifting whimsical badass who takes on the personas of cows, sex-fantasy robots and watermelons at will. The show brought out a growing portion of hip-hop fans who can drop it to lyrics about getting pussy and being mesmerized by girls’ asses, but are more excited about the queens telling us just how great their pussies and asses are — particularly the one doing it in the strangest possible way.

The show drew a mostly young, fairly diverse crowd, many looking ready for a night at the club. Doja was rocking a bubble-gum pink wig and light-blue fluffy cape that she occasionally swept aside to give the audience choice peeks at her much-lauded ass. 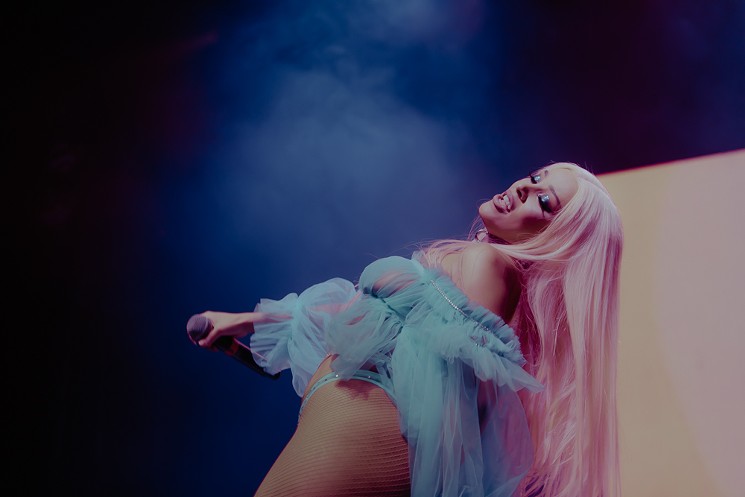 Doja Cat's puts the spotlight on her main attraction.
Brandon Johnson (@BJohnsonxAR)
Unfortunately, Doja doesn’t quite yet have the athletic dance moves to carry the hype her music demands. She knows it, too, and she’s hired a choreographer for her upcoming sold-out solo tour for Hot Pink. (As she told MTV’s Fresh Out Live on February 28, “Cuz I love you guys, and I’m not gonna be going back and forth and twerking.”) But she made up for the admitted reliance on strutting with an impeccable power stance and bold delivery. I quickly became just as enchanted by her sexy weirdness (or is it weird sexiness?) as the rest of the crowd.

And then all too suddenly, before the clock struck nine, it was over. Doja walked off stage, and many people started filtering out of the theater. My heart sank. A friend and I started informally polling members of the exodus. It was clear that a lot of people were there specifically for Doja and had zero interest in seeing Tyga.

That contingent also happened to consist of more women and queer people than the crowd that stayed. Despite a 2018 controversy in which fans discovered homophobic tweets from when she was in high school, aggravated by a half-hearted apology that wasn't, Doja has retained a sizable LGBTQ following. That’s maybe because Doja also came halfway out of the closet herself when she told an Instagram livestream audience, “I like both. I like dicks. I like people that I can have sex with. And you can kinda have sex with anybody.” Or perhaps because songs like “Bottom Bitch” and “Go to Town” can easily be reinterpreted as tributes to lesbian sex, or perhaps because, as one gay man in the crowd told me, “She’s just cute.”

For all sectors of Doja’s fan base, it seemed as though her time was cut short. Putting Doja’s set before Tyga’s is understandable — he is, after all, a much more established artist with a larger fan base. But starting and ending her set so early was insulting.

Even worse: Everything about Doja’s set seemed designed not to overshadow Tyga. The lighting and effects were minimalist when they could have been more. She strutted the stage alone in front of two DJs and a lo-fi screen that occasionally switched between imagery of smiley-face lollipops and the word “sauce.” Tyga, on the other hand, rapped in front of four incredibly talented go-go dancers (whose asses he occasionally tapped) while clouds of smoke shot up through the stage and elaborate edits of his own music videos played behind him.

Don’t get me wrong: Tyga was fun. He has the charisma and clout to hype up the crowd. But while the gist of his act was strong, aspects of his performance came off as plain lazy. He relied heavily on old hits like “Rack City” and more recent viral collaborations like “Dip” with Nicki Minaj or “Taste” with Offset. But he played little from his latest album, Legendary, perhaps knowing that the lackluster raps weren’t what anybody really came for.

Fortunately for those Doja fans who’d missed her set entirely because she'd gone on so early, he brought her back on stage to perform “Juicy” (even though she’d already performed it herself).

Tyga knows how to put on a good show, but lacks the ability to innovate.
Brandon Johnson (@BJohnsonxAR)
Tyga’s finale consisted of turning the concert briefly into what he called a “house party,” for which he brought a group of dozens of women from the crowd up on stage and had the DJs play Cardi B’s “Bodak Yellow” and Saweetie’s “My Type” over the loudspeaker while he shouted encouragements from offstage. He may have used the dance as a cover for some technical difficulties with his own mic…or maybe he knew somewhere deep inside that the audience craved more feminine power.

As critics have long pointed out, Tyga’s unsubtle lyrics, glitzy style and exuberant persona can be charming, or they can make him seem outright ludicrous. At times his act comes off as a desperate attempt to fit exaggerated versions of shallow Hollywood rapper stereotypes. But while so many artists are innovating and reshaping the themes at the heart of hip-hop, Tyga clings almost laughably to a caricature of an earlier era, particularly when it comes to the uncaring over-sexualization of women and the glorification of his own horniness.

Doja, on the other hand, flips that narrative. Her lyrics are even more tantalizing and self-aggrandizing. But what neither Tyga nor promoters seem to grasp yet is that a woman who sexualizes her own body is a qualitatively different thing than a man sexualizing her. Doja singing about exactly how she would like her man to eat her out may still be too vulgar for some, but it’s undeniably fresher than Tyga telling us how many women have bounced on his dick. Doja’s music is about a woman unabashedly wanting sex, having sex, demanding more from sex, and also being silly about sex. It’s a voice that brought people out into the crowd — a voice that has the potential to do more than just retell an old narrative from another perspective.

Doja didn’t need Tyga to make “Juicy” a great song, or to make her own performance shine. While he’s given her a popularity boost that may help launch the next stage of her career, let’s hope that she won’t feel like she has to bend to his washed-up version of hip-hop glory. It would be a shame if Doja kept it juicy only to have that juice drunk dry by someone else, to be caught in a paradigm in which embracing her own sexuality has to satisfy the tastes of the male-dominated industry. If her best side prevails, Doja may be at the forefront of a new wave of creative power breaking that tired paradigm. But only if she’s given the respect and the platform she deserves.


Listen to Juicy and more favorites from Westword writers on our Westword Staff Picks playlist.