Mark Antonation
Chef Wayne Conwell (right) at Tai Tai, which opened in late February.
As a sushi chef and restaurant owner, Wayne Conwell goes beyond just slicing fish; he's a student of Japanese culture and cuisine, and it shows at his fifteen-year-old restaurant, Sushi Sasa at 2401 15th Street. Conwell is now taking his reverence for all things Japanese to a new part of town with Tai Tai, a sushi and poke bar that just opened at 5078 East Hampden Avenue, in the Happy Canyon shopping center.

Think of Tai Tai as Sushi Sasa's casual younger sibling. For one, it's much smaller, with only about two dozen seats, mostly at a long, narrow bar that fills almost the entirety of the restaurant (which was formerly a travel agent's office). And the specialty of the house is temaki — sushi hand rolls intended to be eaten immediately once they're handed across the counter to you. You might order all of your sushi at once, but each piece is delivered to you in sequence so they don't sit on a plate for too long. 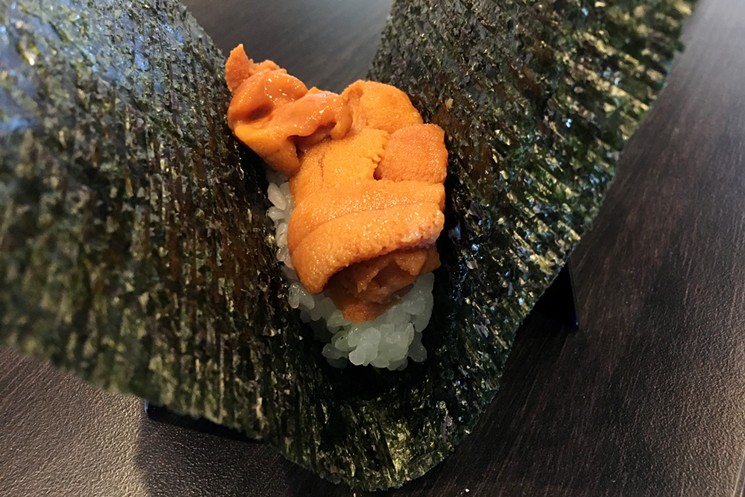 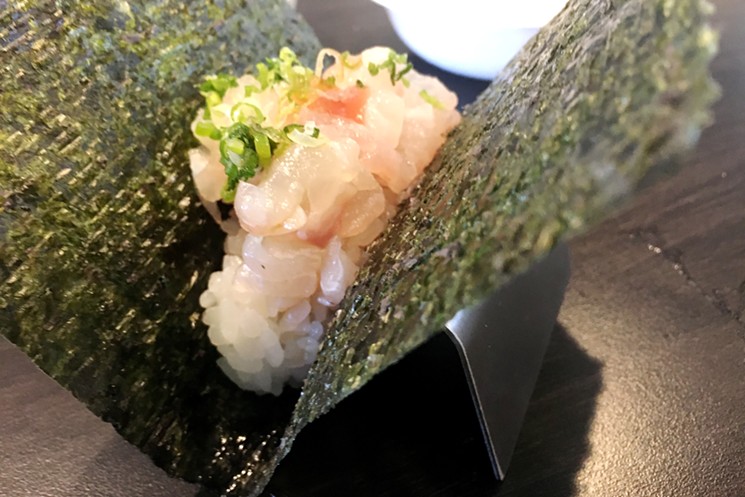 Mark Antonation
You won't see the word "temaki" on Tai Tai's menu, though; instead, Conwell calls his creations "open-faced sushi." The chef serves them almost like tacos, made with crisp nori wraps presented in zigzag holders so that the rice and fish are visible, "allowing our guest the ability to interact with their dishes and enjoy 'their way,'" he notes.

Rolls, poke bowls, vegan options and a handful of appetizers and desserts (don't miss the matcha tiramisu) round out the menu, and there's also an in-depth list of sake, beer and Japanese whisky for adults. Japanese custom dictates that sake cups are filled to overflowing to represent hospitality and generosity, so Conwell uses compostable cups set in bowls to catch the spillover (and no one will mind if you sip the extra sake out of the bowl once you've finished your cup). 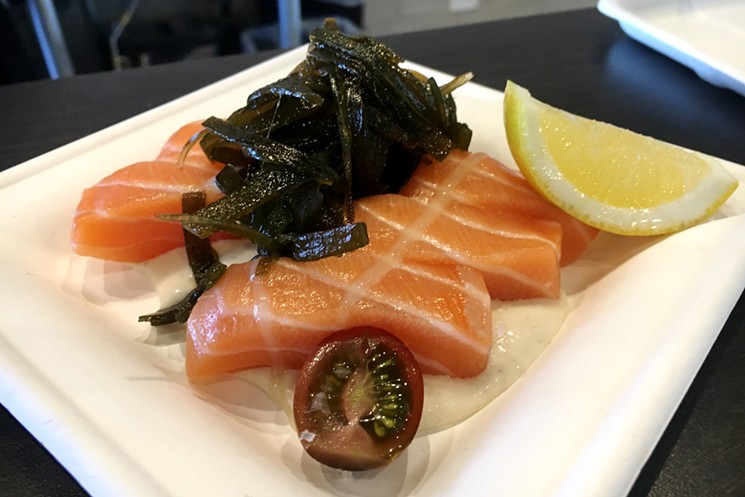 Scottish salmon with tofu vinaigrette and black kombu.
Mark Antonation
Conwell says he's dedicated to the same level of food quality and service that have made Sushi Sasa a top destination over the years. "Guests will experience the exact same quality seafood, rice, nori and specialty accents they have grown to expect when dining at Sushi Sasa," the chef explains. "Our 'jourenkyaku,' or loyal regular guests, will appreciate the same quality in a slightly different package, and we know that new guests will be blown away with having superb fish cut from whole fish served in their rolls, poke bowls and specialty creations."

Happy Canyon is surrounded by residential neighborhoods, so Conwell has designed Tai Tai with families in mind. "Young adults and smaller kids will find the full gamut of colorful Japanese soft drinks and homemade desserts, visible right when they enter," he says. And much of the food is easily packaged for takeout, for families on the go.

The restaurant is open for lunch and dinner, and the chef says lunches are designed with a fast pace in mind, while dinnertime is more of a lounge-like experience. The compact space and layout give guests "the ability to speak to your server, barkeep and chef, often the same person, directly from just about anywhere in the restaurant," Conwell adds. "Our mission is to give the Cherry Hills and Happy Canyon neighborhoods the number-one, eco-friendly, casual Japanese/sushi restaurant experience and atmosphere."

Tai Tai is now open from 11 a.m. to 9 p.m. daily. You'll often see Conwell himself behind the sushi bar, especially as the restaurant finds its footing. Call 720-287-4321 or visit Tai Tai's website for more information.