Mark Antonation
Chefs Carrie Baird (left) and Natascha Hess head Rose's Classic Americana and the Ginger Pig.
Those who have missed chef Carrie Baird's fancy toasts and welcoming demeanor since she left Bar Dough last month can now experience both at Rose's Classic Americana, which is now open inside Rosetta Hall, at 1109 Walnut Street in Boulder.

Baird just joined forces with Natascha Hess, chef/owner of the Ginger Pig, which made the leap from food truck to brick-and-mortar when Rosetta Hall opened last fall. The two, friends since before Baird was part of season 15 of Top Chef, formed That's What She Said restaurant group, which oversees the operations of Rose's and the Ginger Pig. 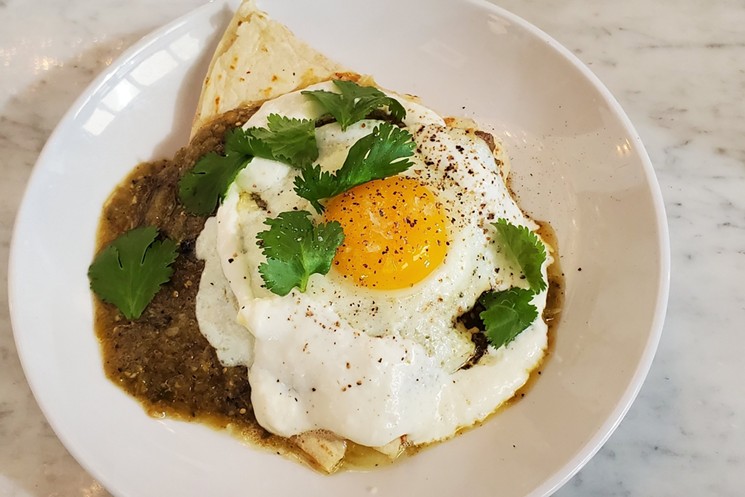 This spicy bean stew is a great breakfast alternative and also carries through to the lunch menu.
Mark Antonation
click to enlarge A breakfast sandwich on a rectangular English muffin.
Mark Antonation
Rose's opened this week with breakfast and lunch options in the Rosetta Hall slot that was previously Folsom Foods. Breakfast kicks off when the hall opens at 8 a.m., with toasts made with bread from The Med and topped with the likes of whipped ricotta with blueberry preserves or Nutella with berries and a sprinkle of seeds. Hearty breakfasts like Baird's huevos rancheros (which beat Bobby Flay) and spicy stewed beans with a poached egg are served alongside breakfast sandwiches on rectangular English muffins. For lunch, there's a classic burger, a fried-chicken sandwich (both accompanied by hand-cut fries) and a couple of big salads, including an iceberg wedge doused in Baird's version of a famous (if, like the chef, you're from Pocatello, Idaho) salad dressing from Buddy's Italian Restaurant.

Since Baird and Hess are overseeing Rose's and the Ginger Pig together, you may see some kitchen swapping; Hess says she'll definitely be helping out a couple of days a week as Rose's gets going. "It's the first time in three years I've gotten to cook with butter!" she points out.

The two met when Baird was the executive chef at Brazen and Hess was just putting together a business plan for the Ginger Pig. She staged under Baird to gain restaurant experience, and Baird helped her formulate recipes and even worked on the food truck when it first launched. Let's hope they have plenty of other collaborative ideas in store for the future.