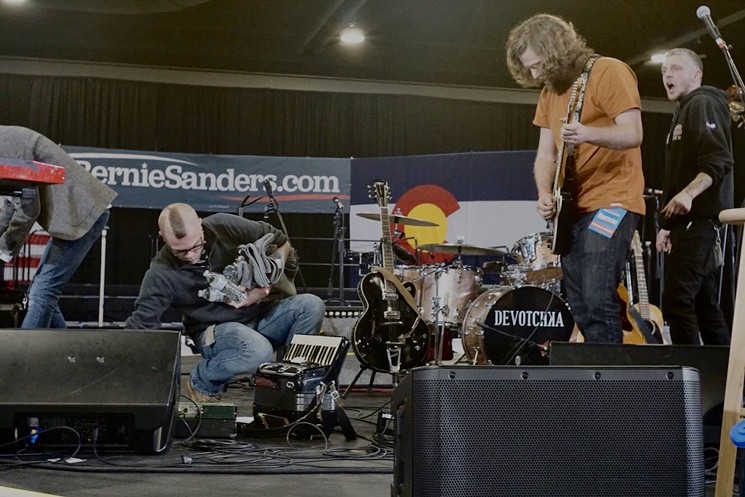 As of Monday morning, however, the Boulder County resident was unemployed. He can thank the coronavirus and the wave of closures the viral outbreak has caused.

“They told us this morning to file for unemployment,” Diemand said on Monday, referring to his work at the clubs. "I’m not eligible to apply until April since I started in October.”

Only about 10 percent of his income comes from working at the clubs, so unemployment, if and when he gets it, won’t amount to much. The rest of his employment is on a contract basis, so he says he doesn’t qualify for unemployment insurance, not even under emergency measures currently being put into place at the state and federal levels.

On March 16, Governor Jared Polis announced that all restaurants, theaters, venues, bars, gyms, casinos and and more must be closed statewide.

Diemand says the closures are affecting the entire music industry, including everyone from venue owners to production companies to people pushing cases onto stages and tuning guitars.

“We are talking hundreds of thousands of people across the country out of work overnight,” he says.

Ross Swirling is also a Denver sound engineer and works a variety of jobs in the music and audio-visual industries, including at large events at the Pepsi Center. Like many of his colleagues, he was applying for unemployment on Monday. His job relies on people coming together in big groups. Right now, they aren't.

“I’ve got nothing on the horizon,” he says. “Pretty much everything is going to be shut down until mid-May, is what it sounds like. There’s going to be no music, no concerts or anything to work at. All the corporate conferences and stuff like that are also shut down.”

Swirling says that venue work is seasonal in nature, and because the concert season was about to begin, ramping up after the wintertime doldrums, many people who work in the industry will be running out of any savings they had built up over the previous year. The timing is unfortunate.

“My partner makes more money than I do, and she’s going to be able to work from home,” Swirling says. “That helps us out, but we are still going to be down to a one-income household, so that's making our lives a little tight. A lot of people in our industry are not as lucky to be in the situation I am in.”

Stephen Oskay is an assistant bar manager for Z2 Entertainment and, until last week, he worked at the Fox Theatre in Boulder and the Boulder Theater. He also owns his own company, which staffs and rents equipment for music festivals, block parties and other events. Right now, both clubs are closed, and his company has no events planned for at least two months.

"It was already a very kind of feast-or-famine work," he says. "And we're kind of getting out of a slow season and counting on the busy season to start. That's really sort of gone now. We really don't know when we're going to be operational again."

On Monday, he was self-quarantining at his Boulder home because he worked a show on Thursday and didn't want to take any chances. Oskay says he needs to figure out the financial impact the closures will have on his business and his personal finances. He might be able to get some unemployment through his job at the Boulder venues.

"I lost my home in the [2013] floods, but that's a totally different kind of displacement," he says. "I still had my job and all that. This is a very new thing. I've always worked my whole life. It's not the same comparison, but it's kind of a surreal feeling, just not knowing what to do. You see that stuff happen to everyone else and never really think it's going to happen to you."

Sarah Singer, who works as a tour manager, production manager and lighting designer, was ready to head out to work an arena tour starting on the East Coast last week when the plug was pulled.

“I was supposed to fly out to Philly on Thursday morning. I found out at midnight the night before — my flight was at 6 a.m. — that they had scrapped the entire tour.”

Singer says that she usually has local venue work or festival work to supplement her income between larger gigs, but now that most venues are shut down and festivals have been canceled or postponed, she is completely out of work. Even the dog-walking app she sometimes picks up jobs with is offline. She has a little bit of money saved, so she thinks she can manage for a couple of months at best.

“The other little supplemental stuff I’ve done in between tours is no longer an option, even if it’s like restaurant work,” she says.

Singer says her industry has never had a safety net for the people who work in it, and the coronavirus has shed some light on that. She says she supports some changes so that people are better taken care of — not only in the event of widespread closures, but in general.

“A lot of our jobs are particularly dangerous and taxing on our bodies, and there's no health care for us whatsoever, even contract-wise,” she says. “If you get hurt on the job, that's usually out-of-pocket yourself. And so this is just kind of like another thing.”

Representative Jonathan Singer, whose district includes portions of Boulder County, says that the social distancing people have been called upon to do will impact the livelihoods of so-called gig-economy service workers.

“If you work for Uber or Lyft right now, the downstream effects if you don't have concerts, sporting events — restaurants are closed except for, you know, delivery and carryout — the potential effects here are catastrophic,” the representative says.

He has been reaching out to the state's Department of Labor and Employment several times daily to see what resources might be available to contract workers through the unemployment insurance program. Another possibility he has considered is asking for a waiver that would allow the Department of Labor to cover contract employees.

“What’s unfortunate is a lot of that is federally guided, so they are looking to the feds right now,” he says. “I’m prevailing on our congressional delegation to provide new relief through the new package that’s coming through for contract workers in our concert venues and our gig-economy service workers, which is what they really are.”

He says that he doesn’t have a great answer to the issue right now, and it is being complicated by a potential economic downturn the state is facing. A solution might have to come by way of an act of Congress, but people are moving quickly on the issue.

“This is something everyone is keenly aware of,” he says. “We are appealing to the federal government, both privately and now publicly, to make some changes to make sure new gig-economy workers and contract workers can be covered.”

Diemand says that if any silver lining has emerged from this catastrophe, it is that the sudden widespread unemployment has brought many in the field together.

"It's a cutthroat industry," he says, "and we're all trying to steal each other's gigs a lot of the time. And now we're banding together in a way that I've never seen before.”