COVID-19 Update: Polis Wants to Cut In-Person Workforce in Half 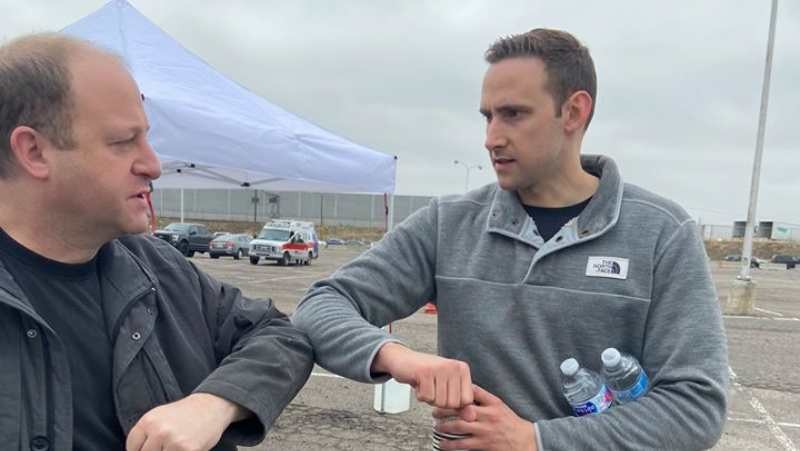 coiorado.gov
Colorado Governor Jared Polis demonstrating the proper elbow-bump technique.
Late this afternoon, March 22, at the state's Emergency Operations Center in Centennial, Governor Jared Polis asked that employers in non-critical industries find ways for half or more of their workers to telecommute as a way to address the ongoing spread of COVID-19, suggesting that this edict would be enforced not by law enforcement, but by "the grim reaper" — because failing to take such actions could lead to unnecessary deaths. And he offered his most critical comments to date regarding what he characterized as the federal government's inadequate response to competently address the outbreak.

At one point, Polis said that he was "furious" that the United States, "the leader of the free world," is being forced to close businesses such as restaurants and bars because of too few COVID-19 test kits, ventilators and the like "to properly care for those with the virus."

While Polis maintained that "we're not dwelling on the failures of the past," he returned to the subject of federal inadequacies several times during a talk that, in a development that couldn't have been more ironic under the circumstances, was delayed for more than an hour by one of the longer White House press conferences in recent memory, until finally Polis started his Colorado conversation before President Donald Trump had surrendered the national spotlight.

Because of federal failures, Polis said, "we as states need to play an unprecedented role to deal with the virus. We are and we will." That includes finding a way to use Colorado resources to produce as many as 7,000 ventilators that could be needed before COVID-19 is arrested, he noted.

Colorado's federal delegation has acted on a bipartisan basis, Polis stressed, saying that "Senator Cory Gardner has done everything I've asked," as have Michael Hancock and John Suthers, the mayors of Denver and Colorado Springs, respectively.

With these remarks behind him, Polis turned to the big item of the day: his request for a reduction of Colorado's in-person workforce by at least 50 percent in order to allow for more physical distancing of employees. And he doesn't want businesses to stop there. If 100 percent telecommuting is possible for some outfits, he encouraged them to put it in place. If not, he suggested staggering work schedules, so that fewer people would be on the job at the same time.

Critical industries, including health care, grocery stores and the news media, are exempted from this mandate, but Polis encouraged them to see if there are ways for them to cut back in this respect, too. To set a good example, he said that starting tomorrow, more than 50 percent of the approximately 30,000 Colorado state government employees will start working from home.

Additionally, Polis asked Coloradans to slice in half the number of activities that take them outside the home. People who run four times a week should reduce that total to two, he urged, and those who shop for food twice a week should now do so only once every seven days. Moreover, anyone who's considered at high risk for COVID-19, including people in their seventies and eighties and people of any age with respiratory issues, should not leave the house at all, if possible.

"People have asked how you're going to enforce this kind of authority," Polis admitted — at which point he nodded again to the grim reaper. Individuals who ignore these tips will be "jeopardizing lives," he stated. "It could be your own."

Other new orders from Polis included one that will allow pet fostering without an in-person visit from the Colorado Department of Agriculture and the creation of a new "innovation response team" tasked with developing a statewide system for tracking the spread of the virus, supporting assorted institutions and "creating a suite of services for citizens under isolation or quarantine" — more steps being taken because of the federal government's failings, he stressed. He also outlined public-private partnerships to produce hand sanitizer and personal protective equipment, or PPEs, that the feds have been unable to supply, and touted new COVID-19 tests that should be able to provide results in as few as 45 minutes, as opposed to the two or three days other versions require.

"We should have had mass testing months ago rather than what we're talking about — moving toward quarantining an entire society," Polis asserted, his anger evident. "But we don't have that luxury. We are where we are. The virus is in our community, and we must respond."

According to Polis, the current measures can't be allowed to be "our new normal. We need to get back to a place where we can do the things that make life worth living. Social distancing cannot last forever." But in the short term, he concluded, "Coloradans need to heed this advice and take this situation as gravely and seriously as health-care leaders are."