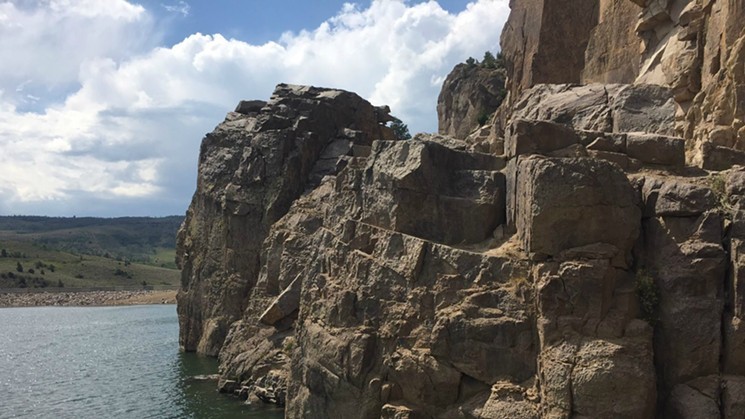 Summit County Sheriff's Office
Our March 17 post about the Office of State Planning and Budgeting's forecast in the face of the ongoing pandemic was headlined, "How COVID-19 Is Predicted to Brutalize Colorado's Economy." But even though that report was grim, it actually fell short of reality, as evidenced by an updated analysis for May that revises already low expectations even further downward.

This scenario is captured visually by the graphic below labeled "Job Loss Relative to Peak Employment," which shows the line for 2020 doing a swan dive more breathtaking than anything current Olympic gold medalist Chen Aisen could ever hope to accomplish.

The study notes that "declining revenues are driving a significant budget shortfall." That's a considerable understatement. In March, the office prognosticated $13.1 billion in general fund revenue for the 2020-2021 fiscal year. The update foresees $10.8 billion, or $2.4 billion less than the last forecast.

Moreover, OSPB director Lauren Larson and deputy director Luke Teater, the listed authors, note that the budget for the 2021-2022 fiscal year "will need to be $3.4 billion less" than Governor Jared Polis's initial request, thanks in part to carryover impacts from the previous twelve months.

The reason these changes are necessary is explained by data such as that tracking retail sales in Colorado during March. Totals rose in four sectors: grocery stores (a 26.9 percent increase, likely due to panic buying), health and personal-care stores (up 4.3 percent), online and mail-order shopping (a 3.1 percent boost) and building material and garden dealers (a 1.3 percent bump).

Those with decreases? Here they are, in descending order:

As bad as these numbers are, April's will be worse, since many of the retail outlets in the categories above were open for part of March but closed for all or most of the next month. 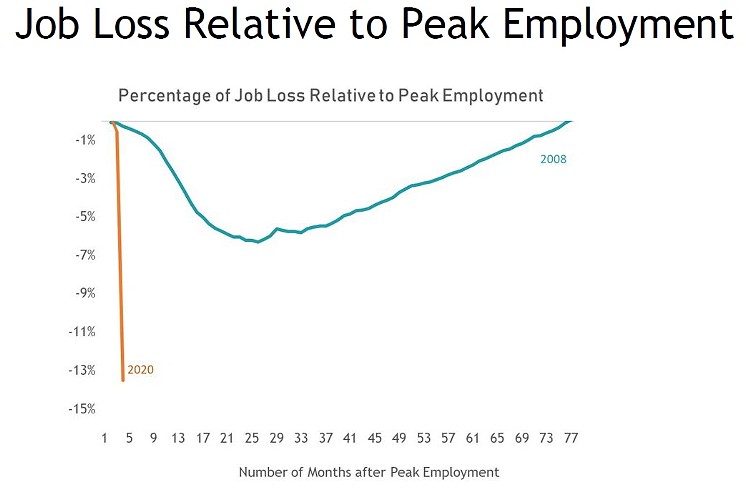 The line for 2020 is on the left.
colorado.gov
Also plummeting has been tourist spending, which fell by more than 80 percent between February 1 and April 25. And the energy industry has taken a pounding, too: A chart showing the active rig count in the state from April 2019 to May shows a dip of 80 percent-plus.

As expected, so-called lower-wage earners — defined as those making less than $22 per hour — are being hit the hardest by the economic downturn. Unemployment claims by industry reveal that more than 20 percent of the applications came from employees working in arts, entertainment and recreational capacities, and a similar percentage from accommodation-and-food-services trades.

In contrast, those earning in excess of $34 per hour account for less than 10 percent of the filings — still considerable, but not nearly as devastating as in lower-paid professions.

These are the unemployment claims by parts of the state:

In a statement about the new budget report, Polis offers empathy and reassurance. "Just as families across Colorado are tightening their belts because of this pandemic, so is our state," he says. "I know this is a difficult time for many hardworking people, and Coloradans are doing all they can to make ends meet. This pandemic is affecting the global economy, and Colorado is not immune to this economic crisis. This is a challenging budgetary environment, and everyone is working hard to ensure Colorado remains on the right path. We are all in this together and we will get through it together."

Click to read the Office of State Planning and Budgeting's May forecast and accompanying slideshow presentation.