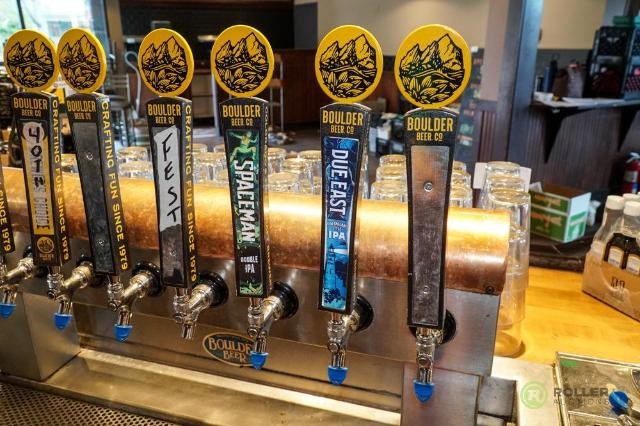 Rollerauction.com
Going once, going twice. Auction items include tap towers and handles.
In retrospect, the owners of Boulder Beer Company are probably sighing with relief that they decided in January to close the doors to its brewpub, which was Colorado's oldest. If the pub was struggling four months ago, then it would certainly be suffering more now during the coronavirus pandemic.

Several of Boulder Beer's flagship brands are still being made and distributed by Sleeping Giant Brewing, a Denver contract company that took over production. But the rest of the brewery's equipment is now being sold at auction, as it has to be cleared out before its building is sold to new owners.

It's a sad end to what was one of Colorado's most storied brewpubs, but it may just be the beginning if the state's brewing industry isn't able to recover from a disastrous 2020.

Jagged Mountain Craft Brewery is the latest small, non-packaging brewery to figure out a way to get its beers into cans for to-go sales. Beginning today, the brewery has sixteen-ounce four-packs of Sawatch American IPA, Four Pass Pilsner and This Beer Really Ties the Room Together Blonde Milk Stout.

Bruz Beers has its Dawg Daze IPA ready to go today. Brewed with continental malts and a combination of European and American hops, "Dawg Daze is nicely hop-forward with a rich complexity imparted by a bold Belgian yeast," the brewery says. "Notes of citrus, apples and apricots mingle with the spicy and citrusy hops to create truly unique flavor and aroma profiles."

Thursday, May 21
Cerebral Brewing will have a new beer available to purchase online at 9 a.m. (and pick up later in the day). Bird of War: All the Berries is a 6.3 percent ABV smoothie-style sour ale with Bird of Paradise fruit, along with blackberry, boysenberry, raspberry, yumberry and lactose.

4 Noses Brewing
Friday, May 22
4 Noses Brewing in Broomfield celebrates its sixth anniversary — in to-go fashion — with five new beers. The first is Kiwi Eating Kiwis, a New England-stye IPA with kiwis and New Zealand hops that gives it a tropical aroma and balanced fruit flavor. The second is a new version of the brewery's michelada, this time with the addition of fresh habanero peppers, thus creating Michelada Caliente. The other three have yet to be revealed.

Alpine Dog Brewing
Saturday, May 23
May is chile beer time at Alpine Dog Brewing, which has put on its Chile Pepper Beer Fest for the past four years. This time around, everyone will have to party at home, but there will plenty of spicy suds to do it with. Alpine Dog is releasing four bottled beers infused with various chiles and other flavors. They are: Habanero Coconut Thunder Puppy Juicy IPA; Smoky Chili Pepper Wolf's Blood Red Ale; Jalapeno + Hatch Chili Baron of Highfall Dry Hopped Pilsner; and Oaxacan Mole Dyatlov Pass Incident Imperial Stout.

Memorial Day weekend is here, and although Colorado's breweries are not yet ready to party, they are helping people do so at home. As such, Station 26 Brewing will be offering a barbecue feast and new beer for takeout. The food is cola-braised pork butt, Texas hot links, crispy pork belly, creamy homemade mac n' cheese, braised greens, cornbread, tangy BBQ sauce from Roaming Bull Brasserie. The beer is Strawberry Lemonade Sherbet, "a delectable pastry sour beer featuring balanced flavors of strawberry fruit, lemons, and vanilla," the brewery says. "Brewed with lactose for a smooth mouthfeel, with a tart finish. And gluten reduced! Available in four-packs of sixteen-ounce cans." Go to the website to pre-order food and brewskis.

Woods Boss Brewing will release four canned beers. The Contour Lines v2, the second version of this New England-style IPA series, was done in collaboration with Craft Alley and Beer Drop. With notes of orange and pineapple, the beer is available in four-packs of sixteen-ounce cans. The brewery will also have its version of Colorado Strong Pale Ale, a benefit beer supporting our brewers and bartenders. The third beer is Good Nectar of the Forest, a double New England IPA with lots of hops. The fourth beer is TBA.

Flux Opacitor is back at River North Brewery for Memorial Day weekend. "This hazy IPA is 8.4 percent ABV and full of Citra and Mosaic hops, giving it tropical, citrus flavors," the brewery says.

Lady Justice Brewing and Lady Gang Music have teamed up to create an American Pale Lager in celebration of the release of "Git It," a single off of Lady Gang's upcoming album, Full Throttle. Made with prickly pear and pineapple to represent the desert and the ocean, the beer will be available in cans and Crowlers. Lady Gang will be at the brewery to hand out purchased beer to go and will perform a live-stream concert at 3 p.m.

Goldspot Brewing brings back Grassroots IPA in Crowlers. "This beer is jam-packed with Lemondrop and Idaho 7 hops for notes of dank lemon, and at 5.5 percent ABV, it's a beer you can drink all day," the brewery says.

Join Jagged Mountain Craft Brewery for the release of its version of Colorado Strong Pale Ale, a benefit beer supporting our brewers and bartenders. It will be available in Crowlers to go.