Photo by Michael Roberts
An unknown person removed the yellow caution tape from a Jefferson County playground and put up American flags in its place.
As part of the state's efforts to prevent the spread of COVID-19, public playgrounds across Colorado were made off limits. But such restrictions have become increasingly controversial as Governor Jared Polis's stay-at-home order transitioned to the safer-at-home program, and shortly before Memorial Day, someone in Jefferson County decided to make a statement.

Overnight, the yellow caution tape wrapped around playground gear in a park near West Ken Caryl Avenue and South Simms Street was removed, and poles planted around the slides and climbing apparatus to keep it in place were repurposed as holders for multiple American flags.

Although this action was a protest of the most pointed sort, frustration over playgrounds remaining closed even as most businesses are being allowed to reopen is clearly growing throughout the metro area, particularly Jefferson County. Also in Jeffco, the play area at iconic Clement Park, near Columbine High School, had been encircled by yellow caution tape over recent weeks, but on Memorial Day, it was down, too, and the equipment was being swarmed by kids.

Many rules related to the novel coronavirus have changed of late, but Nikki Work, senior communications specialist for Jefferson County Public Health, makes it clear that playground regulations aren't among them.

"Playgrounds are closed under the current statewide public health order because they promote congregation and because it’s not feasible to disinfect playground equipment often enough to minimize risk to an acceptable level," Work writes via email. "Jefferson County Public Health has not yet approved the use or opening of public playgrounds." 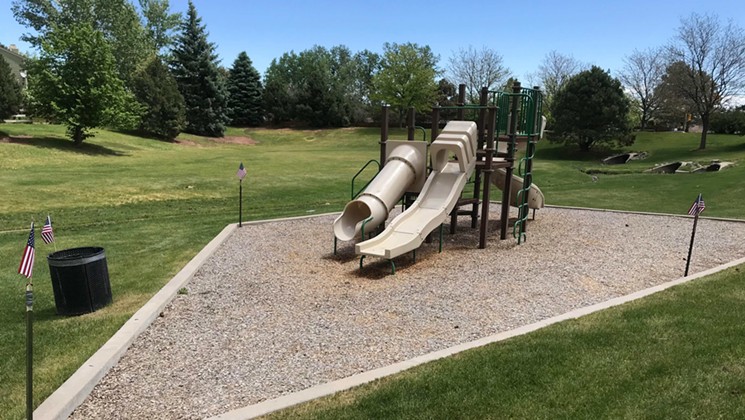 A wider angle on the Jeffco playground.
Photo by Michael Roberts
How often are playgrounds being reopened without authorization? Work admits that Jeffco officials aren't sure.

"At this time, we do not have any data regarding the compliance or non-compliance of the general public and their local playgrounds, nor do we have a campaign directly aimed at the restriction of playground equipment," she says. "However, we are working consistently and across many channels to educate and empower the people of Jefferson County to make the choices that will protect thems and their loved ones from COVID-19 while helping slow the spread and protect our community."

This includes "encouraging mask-wearing, social distancing, frequent hand-washing and staying home while sick, while at the same time increasing capacity for testing, contact tracing and other important public health measures," she writes.

Westword sent Jefferson County Public Health the photo at the top of this post on May 26, but the yellow caution tape has yet to reappear. As for the American flags, they're gone — for now.