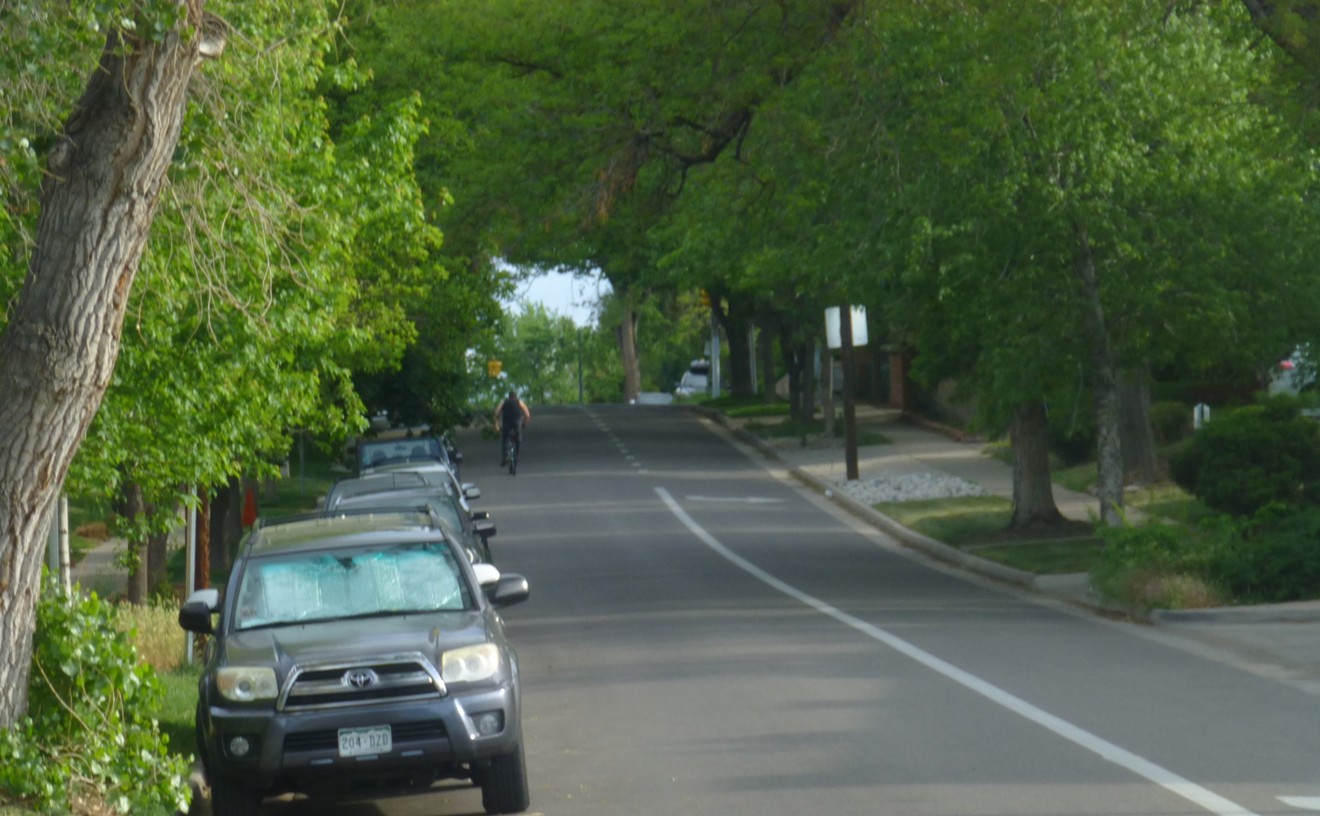 Alan Prendergast
A lone bicylist heads north on the 600 block of Washington Street, where on-street parking has already been halved by a right-turn lane.
Having lived in Capitol Hill most of the past three decades, Barry Zimmer has learned a few things about parking in Denver's most tightly wedged neighborhood. He bought a car with a short wheel base, just so he could squeeze in spaces that other drivers wouldn't attempt. A bartender by night, mobile notary by day, he tries to schedule his arrivals back home during times when most of his neighbors are still at work.

"If you get home after three in the afternoon, your chances of finding parking are pushing zero," Zimmer says.

At one point the city had a zone parking system for Capitol Hill residents, which allowed Zimmer to park within a multi-block radius of his house without fear of parking tickets. But several years ago, the zone system was replaced with a permit that only allows Zimmer to park in a single designated block between East 14th Avenue and Colfax. If that's full — and it frequently is — he can wind up parking a half-mile or more away from his house, which has no off-street parking. "It's frustrating," he admits. "I've complained to the city about the lack of parking, but it largely falls on deaf ears."

Parking frustrations in Capitol Hill may be about to multiply. Quietly, without much public discussion or buy-in from neighborhood groups, city planners are moving forward with plans for a north-south bike route through the heart of Capitol Hill; the preferred route would involve installing protected bike lanes on Washington and Clarkson streets, which would require the removal of between 200 and 430 parking spaces in the city's most densely populated residential area.

Some residents first learned about the plan from a "network verification survey" that the city sent out recently, seeking feedback on the proposed route. (After concerns were raised that the survey hadn't reached many people, the deadline for response was extended.) Although the survey states that the protected bike lanes "will have trade-offs, and we would like to understand your opinion of those trade-offs," no figure is provided on the number of parking spaces that the city expects to sacrifice to the plan. City officials say they have yet to do an analysis of possible parking impacts. (The 200-to-430 range was based on a Westword count of the number of spaces that could be lost over the eleven-block route if one lane of parking is removed from Washington, Clarkson or both streets, depending on which proposed configuration is finally adopted.)

Critics of the plan say that the city hasn't provided specifics of what the protected lanes would look like or how the parking problems would be addressed. They maintain that the city hasn't done nearly enough outreach about the plan or given fair consideration to alternatives that might be less disruptive to residents while providing more safety for bicyclists.

"We're used to seeing protected bike lanes in the downtown business district," notes Brad Cameron, president of Neighbors for Greater Capitol Hill. "There's been quite a bit of elimination of on-street parking, but it's been mainly businesses that have been impacted. Here, what we're talking about are impacts on parking for residents. In terms of the size of it, it's unprecedented."

Anonymous fliers about the proposed route recently showed up on vehicles on Clarkson Street.
Courtesy of Doug Goldman
Cameron and NGCH vice president Caroline Schomp both served on the steering committee for Denver's East Central Area Plan and say that parking and traffic have been major resident concerns throughout the process. (Both add that they're speaking only for themselves, not their organization.) "We've hammered on the planners to do parking surveys before they made these plans, and they've pretty much refused to do that," Schomp says.

Heather Burke, the spokesperson for the project at Denver's Department of Transportation and Infrastructure (formerly Public Works), says the proposed Capitol Hill route is a crucial step in the effort to develop metro-wide connected bikeways envisioned in the 2011 Denver Moves bike plan and a 2016 update focusing on "high comfort bike facilities," including buffered or protected lanes. "The community was involved in creating both the original bike plan and the updated plan," she says.

In 2018, Mayor Michael Hancock announced plans to install 125 miles of bike lanes by 2023. "One of the ways we are going to reach this goal of 125 miles by 2023 is with a significant buildout of the bike network in the city's core," Burke adds.

But Clarkson residents Doug and Cedra Goldman say it's been difficult to pry information from DOTI about the city's plans for their street. "I have signed up for email updates and never gotten an update," says Cedra. "I have had no direct communications from them, except when I've reached out to them. We're on top of this as much anybody can be, and we're lucky to get information third-hand."

"The residents who are using the onstreet parking are not wealthy. They're renters."


The Goldmans live toward the southern end of the route, an area dominated by single-family homes. Doug Goldman suggests that the brunt of the impact of lost parking will be felt farther north, in blocks of apartment houses and converted Victorians, where offstreet parking can cost $300 or more a month. "We have a garage," he says. "The ones who are going to get punished are in rentals. A lot of them have been living here a long time, and they don't have the luxury of attending these meetings."

Cameron agrees. "The residents who are using the on-street parking are not wealthy," he says. "They're renters, and they work all over the metro area. The folks who will suffer the most from this don't have garages."

On April 21, DOTI officials held a "virtual open house" session about several bike and mobility issues in what it calls the South Central Community Transportation Network. The event drew more than a hundred participants, but such gatherings tend to be far from representative of the entire community. A poll of the open-house attendees indicated that nearly two-thirds of them ride bikes or public transit to work, yet in the metro area only about one out of ten commuters rely on transit or bikes.

"It's difficult to have any sort of public process during a pandemic," Cameron notes. "The folks who are involved are already plugged into the bicycle community. I think it's fair to ask what is being done for outreach to the general public."

The Hancock administration has made no secret of its desire to get people out of their cars. The 2011 Denver Moves plan included some pie-in-the-sky declarations about boosting the percentage of people who bike or walk to work from 6 percent to 15 percent by 2020; Hancock has also called for reducing the percentage of people who drive alone to work from 73 percent (one of the highest rates of single-occupancy vehicle use in the country) to 50 percent. But despite the millions spent on multi-modal infrastructure over the past nine years, the figures have barely budged; the city is now shooting for the 15 percent bike/walk milestone by the year 2030.

A key factor in promoting more bike use is providing a safe, connected route from home to work and back. The city's current emphasis on protected lanes (which typically involves a concrete barrier or line of parked cars separating the bike lane from auto traffic, rather than just a few poles or stripes of paint) is supposed to make more riders feel comfortable tackling the commute. But bike advocates have been critical of the glacial pace of the city's buildout and the gaps between routes.

While the proposed Capitol Hill route connects with existing bike lanes south of Speer Boulevard, it raises other safety questions. Does routing bikes on to two busy one-way streets with a high incidence of traffic accidents (including several hit-and-runs every year) make sense? One proposed option is to create a two-way bike lane on one of the streets, thus avoiding taking out parking on the other — but creating another possible hazard, given the steepness of one stretch of the route and the likelihood of bikes coming at each other at wildly different speeds.

Cameron, who bikes frequently around Capitol Hill, believes there are safer alternatives nearby, including Grant Street, a wider one-way. Many cyclists prefer side streets, such as Emerson and Ogden, for getting through the area, but the city's survey explains that while shifting the route to neighborhood bikeways would not require parking removals, it would "require construction of traffic signals at major streets, making them more expensive and time-consuming to complete."

Clarkson and Washington currently each have two lanes of parking for most of the proposed route, the result of modifications made in the 1990s to eliminate a lane of through traffic on the one-ways. "The reason for that wasn't to create additional parking," Cameron says. "It was for traffic calming. It slowed traffic considerably, but the same amount of traffic was still getting through. One of my concerns is that if you replace those parked cars with a bike lane, we may well find speeds going up again."

The looming battle between residents and bike advocates has some people wondering if it isn't time to consider a different approach to the problem. The recent stay-at-home orders prompted the city to restrict auto use in several areas, encouraging pedestrians, cyclists and rollers to make use of "shared streets" and "open streets." The experiment had modest costs and left participants clamoring for more.

"In the midst of the pandemic, the city rapidly rolled out high-comfort infrastructure without angering neighbors by taking parking," says Avi Stopper, whose Bike Streets Project promotes "low stress" bike routes through Denver. "We need to rewrite the process, this exceedingly complex planning process, by which these sort of improvements are brought out."

Barry Zimmer says that, given the nature of his work, he's not likely to give up his car any time soon. The prospect that his quest for parking in his bumper-to-bumper neighborhood is about to become tougher because of the elimination of hundreds of parking spaces leaves him all but speechless.

"That would be madness," he says.