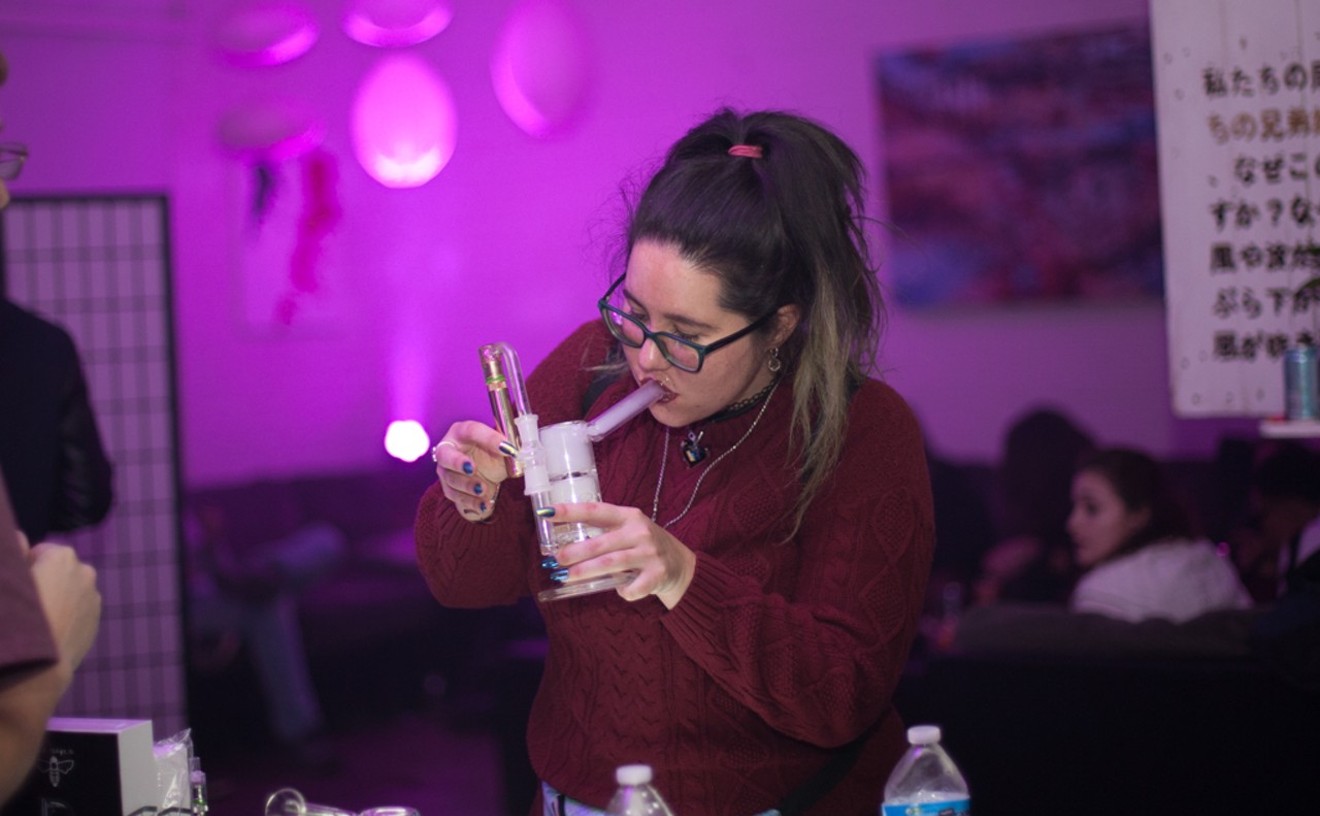 Jacqueline Collins
A visitor at Tetra 9 takes a dab before the COVID-19 pandemic began.
Denver's handful of marijuana clubs and hospitality businesses are reopening at a pace similar to that of restaurants during the COVID-19 pandemic, but their future is cloudier than ever.

When Colorado restaurants were given the go-ahead to reopen for on-premises dining on May 27, businesses allowing social pot use also began the process of opening for consumption. Like the city's restaurants, Denver's few marijuana-friendly lounges and classrooms had been ordered closed as of 8 a.m. March 17, and are now operating at limited capacity with social distancing guidelines. But unlike restaurants, the reopening of marijuana lounges wasn't addressed in recent executive orders from Governor Jared Polis and Mayor Michael Hancock or in new rules issued by Denver regulatory departments such as Excise and Licenses or Public Health and Environment.

The Coffee Joint has been allowing social pot consumption for nearly two weeks now, according to co-owner Rita Tsalyuk, who says she's still waiting on a firm answer from the city about the Coffee Joint's status during the pandemic.

"It's a very weird situation," she says. "We're sort of one of a kind, and they don't know what to do with us right now."

Tsalyuk says she's been communicating with Excise and Licenses and the Denver City Attorney's Office about the establishment's immediate future, but has not received a solid answer. Currently, the Coffee Joint is allowing two people in a room for marijuana use for fifteen-minute intervals, while the rest of the space is devoted to merchandise, mask and food sales, and an extra waiting area for the dispensary next door, which she also co-owns. "We are sanitizing the space and following safety protocols. We're not getting much people in there right now, anyway," Tsalyuk says.

Eric Escudero, communications director for Excise and Licenses, confirms that the city is still considering how to handle marijuana consumption businesses, and had talked with state officials while reviewing executive orders from Polis "to determine if this business can resume offering cannabis consumption, and what public health restrictions are required."

The Coffee Joint is the only licensed marijuana lounge in Denver, where the majority of pot-friendly social-consumption businesses are unlicensed clubs and event spaces. Now they're ready for business again, too.

Private marijuana lounge Tetra 9 reopened on June 6, according to owner Dewayne Benjamin, who says the space has been updated to improve social distancing, with a no-contact temperature check required before entry and removal of any community smoking accessories. "Sadly, we’ve had to let go of our community dab bar," he notes.

"I would say it's as safe as anything else that's allowed to open back up right now," says founder Michael Eymer, who explains that his staff is sterilizing the space and performing temperature checks between sessions. "There is very little guidance for a company like us, especially when it comes to reopening."
He, too, is concerned about the future...not just at his business, but around the country.

"We're kind of doing the best we can in a bad situation," Eymer says. "So far, so good. We haven't received any complaints or seen anyone displaying symptoms yet, and any revenue coming in right now helps us survive. I'm worried people have let off their guard so much that we're almost guaranteed a resurgence here.

"It's about hoping for the best and planning for the worst right now."