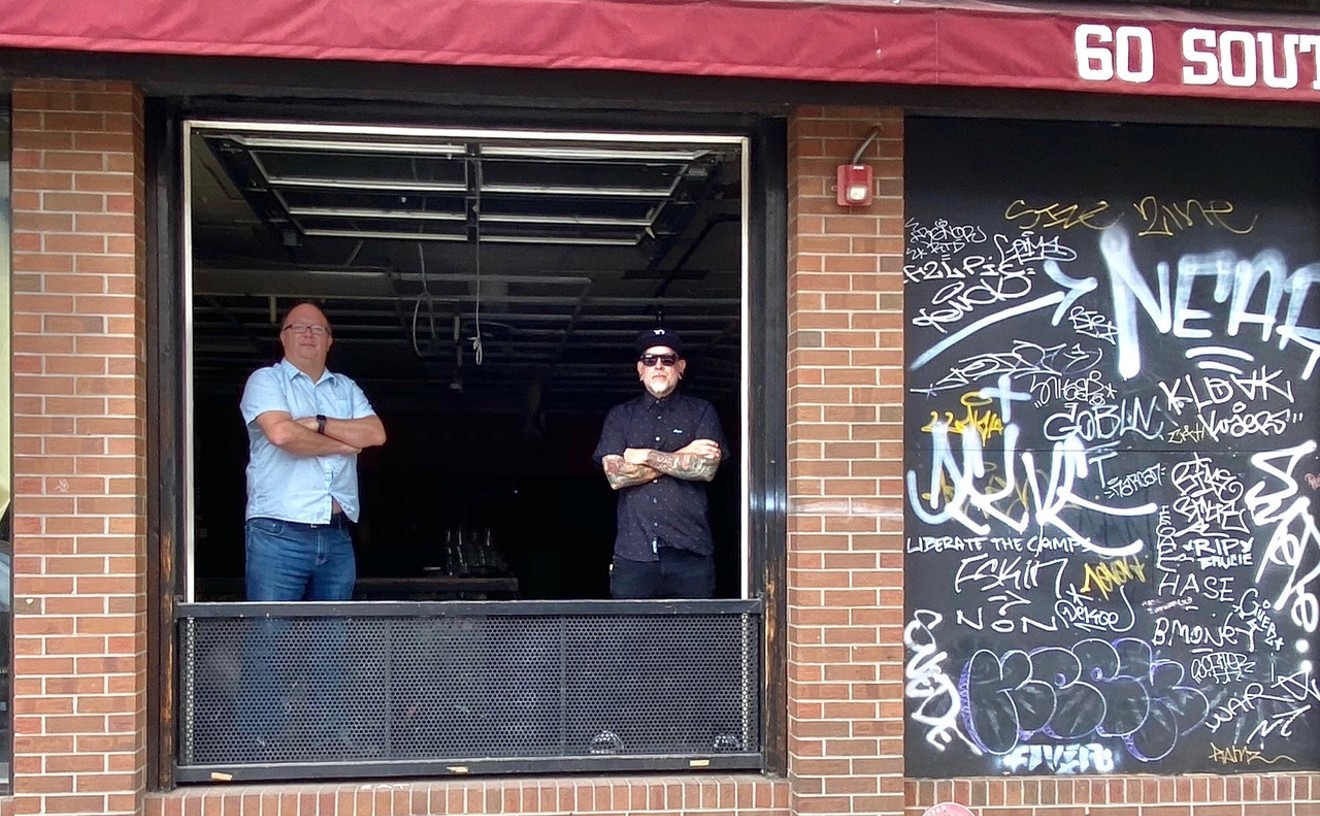 Josh Martinez
Scott Happel and Peter Ore have taken over the venue at 60 South Broadway.
When 3 Kings Tavern announced that it was going out of business a few weeks ago, Denver's music scene lamented the loss of yet another independent venue. But while hundreds were bemoaning the death of a rock institution, Peter Ore and Scott Happel, two of the owners of the Oriental Theater, were in talks with the landlord at 60 South Broadway about renting the space.

On Monday, June 15, the two signed a lease, and two days later, they were in the bar, scraping off the old stickers, tearing down the 3 Kings decor, and calling contractors to fix up the room.

If all goes as planned and the government response to the coronavirus permits it, Ore and Happel will launch HQ, a new independent music venue, in the 3 Kings spot by early August...or as soon as they can.

"Clearly, it’s going to be a music venue and bar," says Ore. "We want to have all genres and types of programming. We don’t want to get pigeonholed into one thing. The greatest strength of the Oriental is that there is something for everyone, and we envision a similar calendar here."

While smaller venues struggle to compete in a market dominated by Live Nation and AEG Presents, Happel's business chops and Ore's quarter-century of experience and connections as a talent buyer for the likes of Live Nation, Soda Jerk Presents and, more recently, the Oriental and Streets Denver put them in a competitive position.

Unlike those larger corporations, Ore explains, he has zero red tape to jump through and can spend money when and how he likes. That means big-name talent trying to find a last-minute room to play often gravitates toward him.

Ore and Happel have had their eyes on 3 Kings Tavern for years; two years ago they were close to buying the business from Jeff Campbell and Marty Killorin. "It got to a point where over the phone we agreed in principle to a deal, and 24 hours later Marty called us back and said Jeff doesn’t want to do it, and the deal fell apart," Happel recalls.

Over the past two years, Happel and Ore have checked out other spots on South Broadway, but nothing fit quite as well.

"This was always the prize that we wanted," says Ore.

Like most venue owners, they have had their struggles through the COVID-19 shutdown, which forced La Cour and Live @ Jack's to close and contributed to the end of 3 Kings. But they're proud that the Oriental is in a strong financial position and should be able to weather the pandemic, assuming the shutdown doesn't go into 2022.

"We are prepared to ride it out for a while," says Happel. "If the world burns, we all burn."

Still, they're optimistic and have made sure that HQ is in a better position than most clubs to survive possible second-wave COVID-19 shutdowns. Negotiating a lease during the pandemic, they managed to put language in the contract that would minimize how much a government shutdown would affect the business and its ability to pay rent. They imagine that this sort of negotiation will become more commonplace in the post-COVID-19 world.

While they know that some people hoping to return to 3 Kings may be disappointed, those who found that venue's vibe alienating may be pleasantly surprised by HQ.

"We’re not going to make any structural changes to it, but we’re basically giving it a facelift," says Happel. "We want everything to have that new car smell, to be fixed and nice and new, and someplace that’s welcoming for anyone who wants to walk into a show to walk into."

While the space will no longer be 3 Kings, Happel and Ore appreciate the legacy of that club. Much as they both enjoyed the old venue, through, they say they want HQ to be more inclusive and welcoming for those outside the rock scene.

"Kings has a long history and is very cool," says Ore. "We hope to build upon that."

If they succeed in pulling off this project, they say they hope the space will constantly surprise audiences, quickly selling out shows and shocking people with the quality of the programming.