I-70 Weekend Closure Could Be First Traffic Nightmare During Pandemic 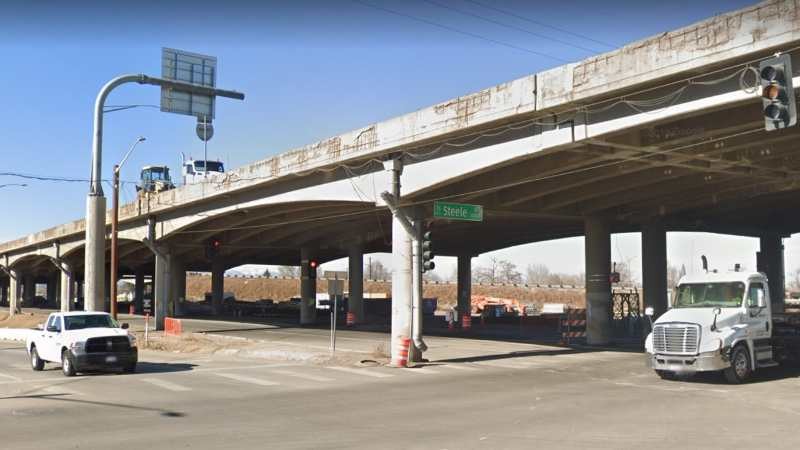 Google Maps
The westbound I-70 ramp to Steele/Vasquez is slated for permanent closure this weekend
The stay-at-home order imposed by Governor Jared Polis in March in response to COVID-19 led to a dramatic reduction in vehicular volume on surface streets and highways alike. But in the weeks since this edict was lifted, congestion has been slowly but steadily building, hinting at a return to the sort of congestion that was commonplace during the not-too-distant past.

Now comes the prospect of the first real traffic nightmare in months: the full weekend closure of Interstate 70 through a key part of metro Denver as part of the massive Central 70 project.

Starting at 10 p.m. tonight, June 26, and running through 5 a.m. June 29, the Colorado Department of Transportation will cut off access to both eastbound or westbound travelers between the Steele/Vasquez exit and Interstate 270. The westbound I-70 Steele/Vasquez off-ramp will be closed permanently, perhaps as early as today, as part of the project.

Our Central 70 timeline offers an overview of the huge undertaking along the ten-mile stretch between the mousetrap, where I-70 and I-25 meet, and Chambers Road for nearly two years — and there's no firm completion date. In summer 2018, CDOT estimated that "Substantial Completion" would be achieved in the year 2022. This phrase would have provided a substantial amount of wiggle room even if it hadn't been accompanied by a smaller-print acknowledgement that the estimates were "Subject to Change."

Here's the detour this weekend: 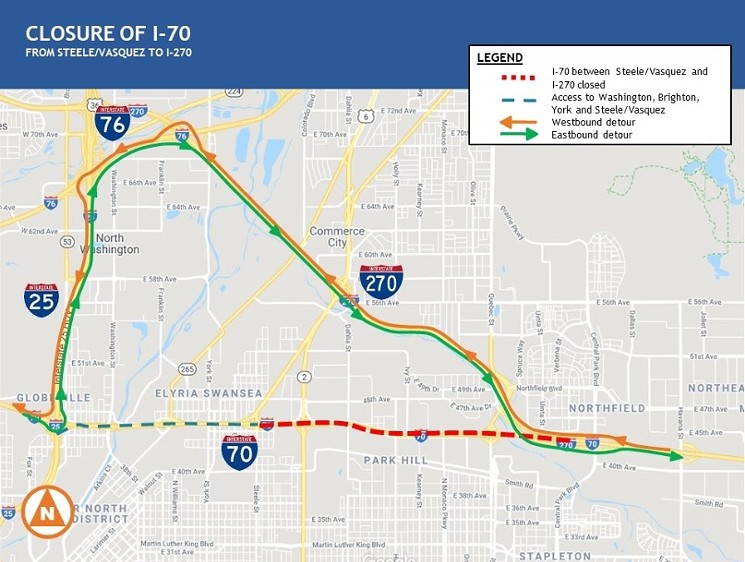 A map showing the Interstate 70 detour to be used over the weekend.
Colorado Department of Transportation
There have already been two full closures of I-70 associated with Central 70, in April 2019 and September 2019; this weekend's will be the third. CDOT's contract for the project, which broke ground in August 2018, allows just four complete weekend closures over the course of the entire effort.

The need for occasional full closures was outlined by Rebecca White, Central 70's communications director, in April 2018. "One of the major restrictions we put on the contractor with this project is that because Interstate 70 is an economic backbone for the state, they can't close any lanes during daylight hours. Up until 7 p.m., they have to keep three lanes running in either direction," she told us. Although that reference was to weekdays, White emphasized that its contractors "have only a set number of weekend and overnight full closures."

According to CDOT, the latest closure is required so that crews can demolish part of the old Colorado Boulevard bridge amid "continued construction of the lowered section."

These are the traffic impacts over the weekend:

By Monday morning, we should know if these shifts were accomplished relatively smoothly, or if the sort of traffic headaches we've avoided for the past three months are back with a vengeance.