Courtesy of [email protected]
This painting could be yours.
Have you ever wanted to own your own piece of a restaurant — even if it's just a tiny, tiny piece? Now's you're chance — and your investment will not only land you artwork from what was one of the top restaurants in Denver over the past several years, but it will go to a good cause.

Denver artist Jonathan Saiz created a series of 88 miniature oil paintings for the dining room of [email protected], which ran for three and a half years before chef/owner Jeff Osaka closed the eatery for good at the end of May. Saiz donated the paintings to the restaurant, and Osaka is in turn auctioning off the individual pieces beginning at noon today (Monday, July 13), and running until midnight on Friday, July 17. All proceeds from the auction will be donated to the family of Brandon Foster, the executive chef of Project Angel Heart who passed away just over a week ago. 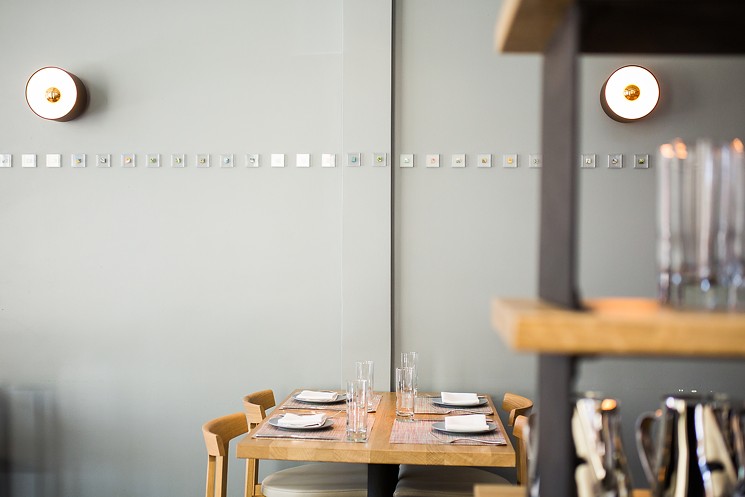 Jonathan Saiz's tiny paintings were displayed in the dining room of [email protected] for three and a half years.
Danielle Lirette
Saiz has been building his reputation as an internationally known artist for more than fifteen years, culminating in last summer's exhibit at the Denver Art Museum, in which thousands of miniatures were combined into a massive installation. According to Osaka, Saiz was a regular customer at his first Denver restaurant, Twelve (which ran from 2008 to 2014), and the donation is in keeping with the artist's standard M.O.: After the Denver Art Museum exhibit ended, he gave away more than 10,000 individual miniatures that had formed a mosaic in the larger piece.

"These paintings were made for the world to see, and we hope that, though a small token, these donations help the Foster family through this difficult time," Osaka adds. "Brandon was a father, husband, leader, mentor, friend and truly a chef’s chef. He was one of the most genuine people I have ever had the pleasure of knowing, and his passing is a real loss for our community."

Each of the 88 paintings have been photographed and loaded to the [email protected] Facebook page, and bidding will begin there at noon today (though some early birds have already put in bids). The bidding begins at $50 each, and the winning bidders will be contacted on Monday, July 20, to arrange payment and pick-up.