It's the End of a Restaurant Era: Racines Will Not Return

Larry Laszlo
So long, Racines. It's been good to know you.
If this were a normal morning, Tim Jackson, CEO/president of the Colorado Auto Dealers Association, would be at Racines, doing business over a breakfast punctuated by almost constant stops to greet other movers and shakers.

If this were a normal day, veteran entertainer Lannie Garrett would be making plans to head to Racines, "my clubhouse," to meet up with friends she'd been meeting there for decades.

But these are not normal times. And if and when we finally have a new normal, we will not be able to celebrate it at Racines: The restaurant is not reopening.

Longtime partners Lee Goodfriend and David Racine, who opened their first restaurant, Goodfriends, more than four decades ago, had been thinking about closing their last spot for some time. In the interim, they'd gone on to open Racines at 850 Bannock Street as well as the downtown Dixons (named after their third partner, the late Dixon Staples) before building a replacement for the original Racines over fifteen years ago, then selling Goodfriends and shuttering Dixons. Before the coronavirus pandemic hit, they already had a deal in the works to sell the property at 650 Sherman Street in January 2021, at which point they would close Racines.

The original Racines on Bannock Street.
courtesy Racines
Then came COVID-19. After closing the restaurant in accordance with city and state orders, the partners announced the upcoming sale, but also said that Racines would be back to enjoy a long goodbye with all of its fans until next January.

Even as other restaurants reopened starting in late May, though, Goodfriend and Racine began reconsidering their plan, wondering whether it was worth the risks to come back for just a few months. Ultimately, they determined that it was not. "It took us a long time to decide," Goodfriend admits. "It's been agonizing, a really hard decision. When we closed on March 16, I really didn't think that would be the last day I would be working at Racines in my life."

But they had to consider not just their lives, but those of people who worked at Racines, ate at Racines. "Why jeopardize our personal health, our staff, our customers?" Racine asks. "We're making a wise decision."

"The virus isn't going away," adds Goodfriend. "I don't want to be indoors in a restaurant. And we are too hands-on."

And how. Racine and Goodfriend were at the restaurant every day, greeting customers at the door, helping the valets move cars into the parking lot, keeping Racines the kind of place where everyone felt at home. 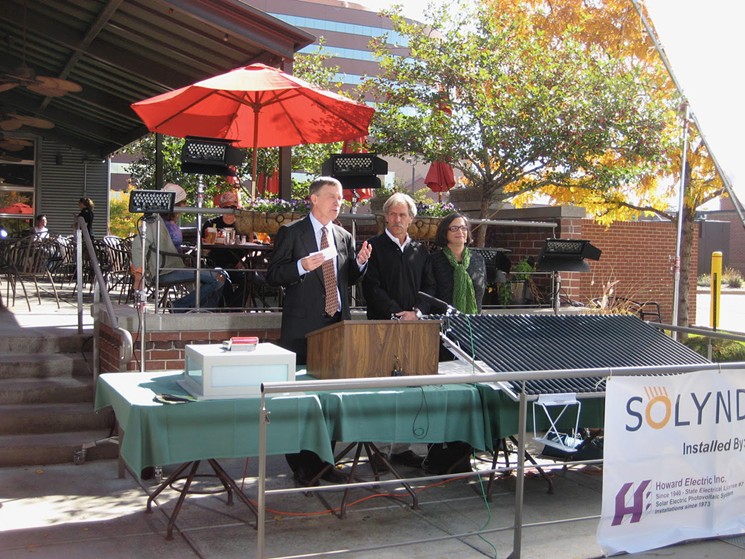 Governor John Hickenlooper, a regular customer, with David Racine and Lee Goodfriend at Racines.
Racines
And even though the tough decision has been made, they're not done working. Late last week, they let employees who'd been off since mid-March know that they would not be returning to Racines. Since then, they've been trying to find new homes for many of them.

"David and I have been talking to some really great restaurateurs around town, trying to place employees," says Goodfriend.

The conversations have been eye-opening. "Those fellow operators say they've never worked harder than in the last four months," says Racine.

That's helped reaffirm their decision. "It was an abrupt transition, but it's okay," says Goodfriend. "So many people have it so much worse than we do. In the restaurant business itself, just being responsible for so much... I don't envy them. It's time for us to go."

And, finding one silver lining in this dark cloud, "Maybe the business that Racines did is going to all the other independent restaurants around town," suggests Goodfriend. 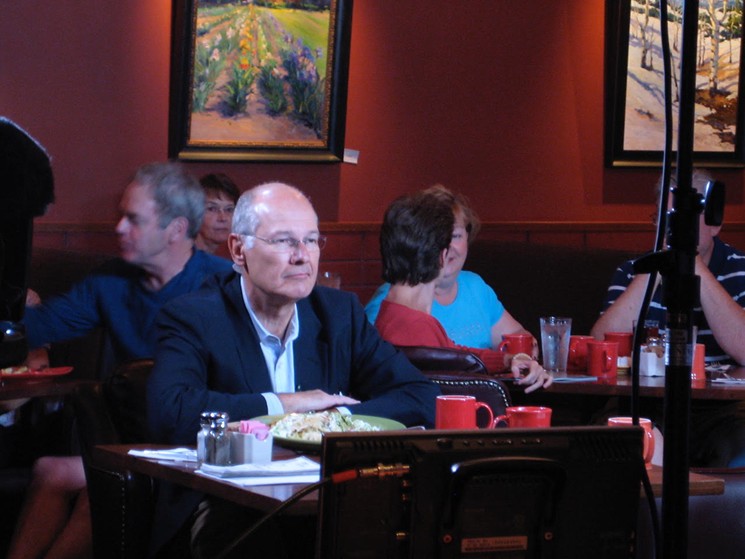 Harry Smith came to Racines during the Democratic National Convention, one of Lee Goodfriend's favorite times at the restaurant.
courtesy Racines
Still, she says, "It's sad to think I can't stand at the front door...it was always very fun and interesting being there."

"Sad" is a useful word to have on hand as the news spreads of Racines' end. "I have no words to express how I feel," says Garrett. "Because on top of the pandemic, there is just about nothing else — except for Trump's re-election — that could put me on the ground in tears so fast."

"I was afraid it wouldn't reopen," Jackson admits. "Nobody will ever replace Racines for me. It was my favorite place ever. There will never be another Racines."

But the Racines memories remain. Already, fans are considering how to give their favorite place a proper sendoff, the type of long goodbye that coronavirus cut short. Maybe they'll meet by the patio with their pooches one summer day and remember sunnier times. Perhaps they'll take a megaphone to the top of that parking garage and share stories with the socially distanced folks below. Maybe they'll hit up Racine and Goodfriend for that Nutty Cheesy Salad recipe.

While they consider options, we're collecting Racines memories here. Post yours in a comment, or email your thoughts to [email protected]; the best stories will be eligible for Racines memorabilia.

And maybe a salad recipe.