Women Are Leading the Way at the Infinite Monkey Theorem

After seven years working at the Infinite Monkey Theorem Urban Winery, Nicki McTague has stepped up as president and CEO of the company. With this shift, the company is now 50 percent owned and 80 percent run by women — and McTague is ready to add not just her leadership to the product, but a marketing approach aimed at other wine-drinking women.

"With wine, we just assume it's females that drink it, but it's females and males of all different backgrounds," says McTague. "I think the new brand will help us tell our story." 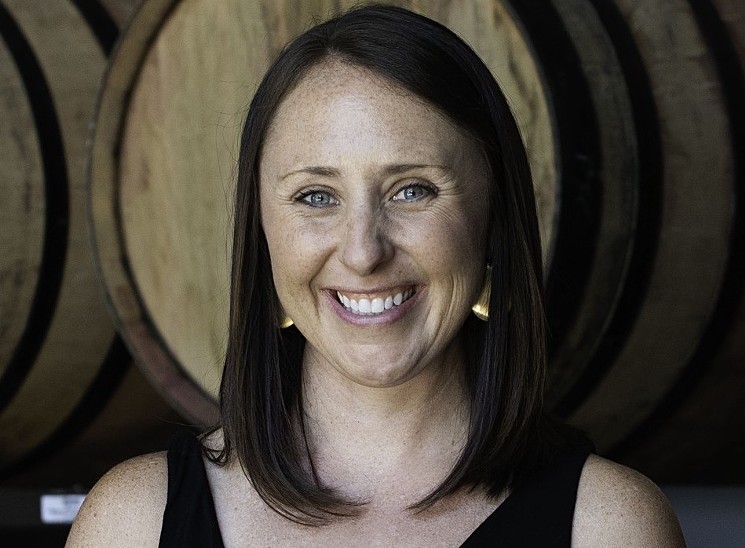 Nicki McTague, president and CEO of the Infinite Monkey Theorem.
Courtesy of The Infinite Monkey Theorem
McTague's promotion comes as former president Aaron Berman transitioned to the winery’s advisory board earlier in the year. The new president and CEO has worked in the wine business for more than fifteen years, starting out at Garagiste Wine in Washington when she was 22. The Fort Collins native had moved to the Pacific Northwest for college, but after a decade there, she was ready to come home to Denver. Shortly after moving back to Colorado, McTague landed a job at IMT, where she started the first wine club, worked in licensing and pushed the wine nationally, eventually becoming vice president. Now she gets to take the brand down a different path as it releases a fresh can design and debuts new wines, goals that have been in the works for more than a year.

"I have always worked under dominating male figures who are trying to create a brand and companies that try to do what woman want, but we don't want brands that don't speak to us," says McTague, adding that most women shun being called "babes" and getting pandered to. "It's time that we do something new and speak to who we are [as a company], and we wanted to create a can that has a smart woman on it and quality wine inside."

This shift comes at a time when businesses have been hit hard by the COVID-19 shutdowns. Where once the winery was expanding and had tasting rooms in Denver, Fort Collins, Aurora's Stanley Marketplace and Austin, Texas, now only the Denver spot remains (while the Austin outpost remains temporarily closed because of the pandemic). The scaling back occurred before the pandemic hit, which McTague considers lucky, since the company doesn't have to navigate the logistics of maintaining multiple tasting rooms.

"I feel like I am walking this tightrope on how to stay smart and relevant, but now is not the time to stop, though we have to do it slowly. It's not how we want to do it, but it's the world of COVID right now," the CEO adds. "We were there first to put wine in a can and we are still this badass group, still conquering COVID and still in the wine industry."

Along with the temporary closing of the Austin tasting room (because of the spike in COVID cases in Texas), the label-design makeover and the reduction in tasting rooms, another big change came when founder and head wine-maker Ben Parsons left the company last year, and McTague says she's not sure what he's up to now. Tim Carron, who worked under Parsons for six years, is now in charge of wine-making. The Infinite Monkey Theorem's bar is still open for a glass — or bottle — of wine.
Courtesy of The Infinite Monkey Theorem
"Right now it's a solid crew, and though it's small, it feels mighty and feels like a small business again," says McTague. "I would say that the bright side of COVID is we can sit back and digest what's going on and have a vision, but I also wish we could go full force and continue operating how we were."

The new Infinite Monkey Theorem cans will debut this year with the fall harvest, and the tasting room at 3200 Larimer Street is open, with socially distanced seating on the patio, though indoor seating will be limited once the weather turns cold. But McTague says the lights will stay on and the wine will continue to flow to keep your glass full during the pandemic.