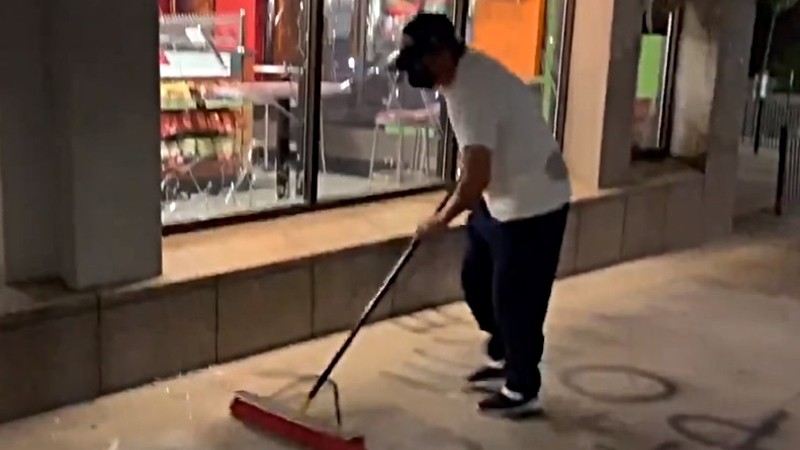 @MarcSallinger
Cleanup outside a vandalized downtown Quiznos located in a building owned by the Colorado Coalition for the Homeless.
Although daytime demonstrations outside the Colorado Capitol on August 22 were peaceful, that night several dozen shit-stirrers vandalized buildings, clashed with cops outside Denver Police Department headquarters, and terrorized nearby residents...some of the city's most vulnerable.

One of the main businesses damaged during the melee — a Quiznos near the City and County Building, at 270 West 14th Avenue — rents its space in the Forum Apartments, a building filled with affordable and permanently supported housing for low-income residents and the formerly homeless, many of whom were terrified by the events that night.

The complex, which contains 100 studio units with full kitchens, is owned by the Colorado Coalition for the Homeless. "Whenever your home is threatened and damaged, it can be disruptive and traumatizing. And it was for our residents," says Cathy Alderman, the coalition's chief communications and public-policy officer.

The vandalism was not connected with the earlier, peaceful protests, and led to a dozen arrests and one citation. It also led to a scolding on Twitter by Mayor Michael Hancock.

"What happened in Denver and across many other cities last night was not protest in the tradition of Martin Luther King, Jr. or John Lewis, and it does not reflect who we are as a community," Hancock wrote on August 23. "Working for change in our democracy comes from peaceful protest and the ballot box. Inciting violence and vandalism is not about making change, it is about anarchy, chaos and mindless destruction. We will not tolerate it in the @CityofDenver."

Since protests sprang up downtown in late May, activists have gone out of their way to support and champion those experiencing homelessness — which makes the victimization of those dwelling at the Forum Apartments all the more ironic.

Alderman notes that the coalition obtained the building in the 1990s with the assistance of then-Mayor Wellington Webb, but its ownership isn't well known. "We don't believe we were targeted in any way," she says. "I've seen some videos circulated online of people who may or may not have been involved, but we'll leave it to the police to determine who perpetrated the damage."

In the meantime, Alderman says, the property manager is "making sure our residents know their safety is important to us. We've got the windows boarded up and we've got security measures in place."

She stresses, "We support our community, and we support the protesters and what they're fighting for. But we ask everybody to think about what it would feel like to have your own home damaged — whatever your safe place would be. We could think about that a little more as we chart these uncertain times."