Testing Out the "Easy-Bake Oven for Cannabis"

Courtesy of Ardent
The Ardent FX is presented as an all-in-one portable cannabis kitchen.
Cannabis legalization has brought forth several interesting at-home gadgets to enjoy the plant in concentrated or edible forms, but something presented as "the Easy-Bake Oven for cannabis" plays on both weed intrigue and nostalgia.

With precision heaters and timed cycles specifically tailored to decarboxylate and infuse food with THC, CBD and other cannabinoids, the Ardent FX attempts to take the guesswork out of making edibles and tinctures at home. Created by Boston attorney Shanel Lindsay, the FX decarboxylates (the process of heating cannabis to activate the cannabinoids before infusion) and infuses up to one ounce of flower or concentrate into butter and oils, but the machine doesn't stop there: After infusion, the FX undergoes a "bake" cycle, which actually cooks and bakes infused goodies inside of the same device.

As someone who has screwed up countless batches of edibles and never got that Easy-Bake oven on my Christmas list, I was excited to give it a try to see how smooth and effortless the FX really was. Retailing for $350 online, it's pricier than most other cannabutter and oil infusion devices on the market, but Ardent also promises more.

What struck me upon opening my FX package was how different the machine, presented in a sleek purple cylinder, looked from what I expected. Anyone unfamiliar with photos of the FX wouldn't have an idea about what the machine does — and that seems to be the point. There are no pot-leaf motifs or other telling imagery on either the packaging or the actual device, and given that one of the main selling points of the FX is that it's allegedly odorless, discretion seems to be one of Ardent's top priorities.

There's no minimum amount of material needed to use the FX, so I started with a quarter-ounce of Mystery #98 flower, a high-CBD cannabis strain. Activation of the cannabinoids lasted anywhere from one hour and 45 minutes to just over two hours, including pre-heating and cool-down time. I quickly noticed that the top would not stay firmly attached during the process. As condensation was released from the plant material, it continuously pushed the lid up, releasing some of the trapped odor.

The FX power button started flashing, meaning the activation cycle was complete and cool-down had started after just under one hour, and cooling down took about 45 minutes. Even after cooling down, the machine was very hot, so don't skip the cool-down period or rush the machine. After adding about a cup and a half of olive oil to my decarbed bud (noticeably different in color and smell, indicating a successful activation), I began the infusion cycle.

The infusion cycle lasts almost three hours, but Ardent's tests have shown that the potency of the infusion will be the same whether the cycle runs for one hour or two hours, so three just seemed unnecessarily long to me. Ardent's advice is that the length of the infusion cycle is up to us, but suggests running it for at least 45 minutes and a maximum of one complete cycle. To be safe, I let it run for 90 minutes before shutting it off manually and removing the lid to cool the contents faster.

My first impression was that the Ardent FX is a very cool gadget, and virtually foolproof if you read and follow the instructions carefully. However, users should realize that it's in no way an instant process. Making an infusion will take two to three hours, not including straining. But without having to check on it, stir, or adjust the temperature, you don't have to be actively engaged.

Ardent also infuses with cannabis concentrate, enabling more potent edibles. The length of the cycles will change based on the type of the material used, but I wasn't expecting it to take so much longer with the concentrate than it did with the flower. For my 1.5 grams of shatter, the decarb cycle took 90 minutes, but the cool-down period seemed endless. After waiting over an hour for the device to cool down, I decided to shut it off manually and open the lid to speed up the cooling. (It was already plenty cool, and I felt a little silly for having waited so long, but Ardent suggests only ending the infusion cycles manually, so I was hesitant to shut it off during an activation cycle.)

The Ardent instruction guide (emailed once your device is registered) mentions that the THC activation cycle's high temperature actually works better than the infusion cycle to infuse kief or concentrates into oil. So instead of going through the infusion cycle the next time, I decided to put the decarbed shatter and a few scoops of coconut oil back into the FX and run another activation cycle for thirty minutes (Ardent's suggested time). I was skeptical, but it did the trick in half the time. The shatter was fully melted and incorporated into the coconut oil, and the result tasted surprisingly good.

Now that I had made my oils successfully, I wanted to try the alluring bake cycle. The bake cycle uses the highest temperature, running at over 300 degrees Fahrenheit for a little over two hours. Unsure what the Ardent FX was capable of cooking, I looked at the company's online recipe guide and found recipes for cakes, pastas, sauces, rice, oatmeal, pies and more. But as I perused the recipes, I realized that just because I can make anything in the Ardent FX doesn't mean that I should. If using it to cook pasta, for example, it would take an hour and fifteen minutes. Personally, I would rather just boil my pasta on the stove and then toss it in infused oil. 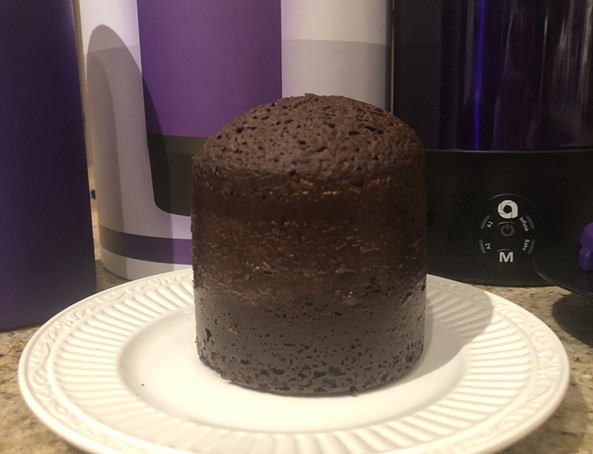 Be warned: Any solid food you bake in the FX will take this funny shape.
Mary LeBudski
I also noticed that most of the recipes instruct you to use the machine's activation cycle to bake or cook, leaving me wondering why they even bothered with the bake cycle. According to Ardent, some recipes do require the bake setting, but some recipes still use an activation setting to cook more efficiently. Additionally, their recipes are designed for both the FX and the cheaper Ardent Nova device, a decarbing machine that doesn't have the baking function. The bake setting is recommended in particular for baked goods, pastas, and sous-vide meats, but most of the recipes can be made with either Ardent device.

I picked Ardent's High 5 Chocolate Birthday Cake recipe to test out the FX's cooking and baking capabilities, but rather than going through their instructions on how to make the exact amount of canna oil needed for the recipe, I just used the infused coconut oil I had already made (which was much more potent than their suggested amount). This recipe called for using an activation setting rather than the bake setting, so that's what I did. After three hours with no sign of cool-down in sight, I had to shut the device off (Ardent warns that no cycle should last more than three hours).

The result was a weird, dense little cake. It wasn't unpleasant, and was surprisingly moist for something that baked for three hours. However, I would probably just use my oven to bake next time and stick to using the FX for activation and infusion. Anyone who's eaten a cupcake cooked under a lightbulb in a real Easy-Bake Oven has probably had a similar revelation.

I could see the Ardent FX being a good option for home growers trying to efficiently preserve a harvest, or anyone looking to make infused cooking oils in bulk. A $350 price tag is definitely an investment, but if you're frequently wasting money on low-dose edibles from the dispensary, it saves money in the long run. Being able to infuse such a large amount brings a lot of potential to the table, but I personally don't want to wait hours for only a small quantity of infused butter or oil. I also think calling it a "portable" cannabis kitchen is a bit misleading: The FX is compact and lightweight, with a handy carrying case, but it needs to be plugged into an outlet and operate at room temperature, so it's not the type of gadget you could take camping or on the road.

What I love most about the FX is the convenience. Having one device to activate and infuse, even if not used for baking, cuts out so many annoying dishes and eliminates transfer waste. The FX is also dishwasher safe, so the cleanup is even more quick and simple. Though some odor is released when condensation pushes the FX lid up, the process is relatively odorless compared to traditional activation and infusion methods, which stink up most of the house.

Even though the FX isn't instantaneous, it still whips up infusions faster than most traditional methods. Plus, the machine is pretty much guaranteed to work whether you know what you're doing or not, so no need to worry about wasting time or good weed on something that may not turn out a usable product — a risk many new cannabis cookers fall prey to. While I wouldn't call the FX a must-have for casual cannabis consumers, it's worth the investment for anyone who wants to make infusions at home.