What the Pandemic Has Done to Pueblo, State Fair 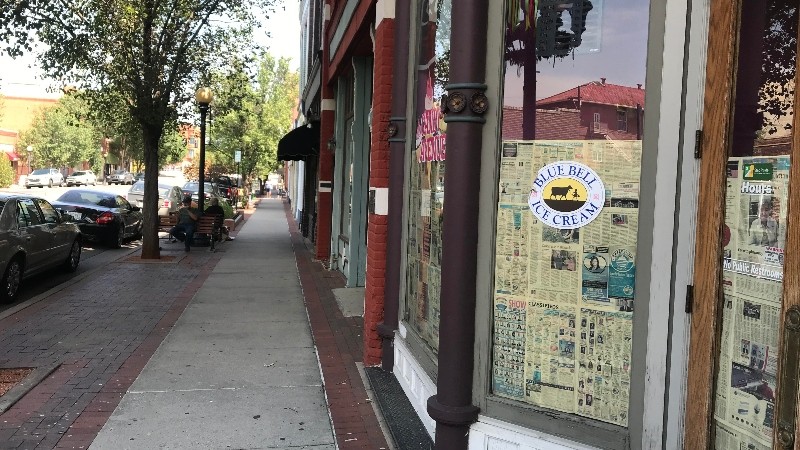 Photo by Michael Roberts
Many downtown streets in Pueblo were severely underpopulated on August 29.
This should be one of the busiest weeks of the year in Pueblo. The city of about 115,000 people south of Colorado Springs is host to the Colorado State Fair, which annually attracts tens of thousands of fans from the area and beyond to take part in a celebration of traditional values that's lively, charming and extremely beneficial to the local economy.

But not in 2020. The Colorado State Fair is ongoing (it officially began on August 28 and concludes on Monday, September 7), but in a much diminished version owing to safety concerns surrounding COVID-19. And the impact of the ongoing pandemic that we witnessed in Pueblo during a visit on Saturday, August 29, was profound, widespread and undeniably sad.

Governor Jared Polis staged his September 1 update about Colorado's response to the novel coronavirus in Pueblo — a location chosen in part to emphasize the need for greater disease testing in southern Colorado, whose positivity numbers are considerably higher than in the state as a whole.

The public portion of the 2020 Colorado State Fair mainly consists of drive-up food service.
Photo by Michael Roberts
Nonetheless, Polis still found the time to boast that the Colorado State Fair was taking still taking place, unlike many similar events around the country. Indeed, as soon as the press conference was over, he was heading to the fairgrounds to witness a livestock auction.

Unfortunately, most folks can only enjoy such fair staples virtually, if at all. As we learned upon our arrival on August 29, the only element of the fair regularly open to members of the general public are food services, which have been converted to a drive-up operation.

The set-up requires drivers to pay in advance for food at booths located near the grounds' entry point, then pull into the appropriate line to receive their order. But you can't dine at the fairgrounds; takeout was the only option.

Aside from a few diners at Brues Alehouse Brewing Co., the Pueblo Riverwalk attracted few visitors on the afternoon of the 29th.
Photo by Michael Roberts
Oh, yeah: Also available are commemorative face masks, priced at $15 apiece.

Because ponying up $10 for a corn-dog basket didn't seem particularly appealing, we headed to downtown Pueblo. We'd last visited the area on a weekend during the 2019 Colorado State Fair, and while most people had headed straight to the fairgrounds that day, foot traffic in the downtown district was steady and healthy.

The playground at the Pueblo Riverwalk remains off-limits.
Photo by Michael Roberts
The story was far different this year. Most of the streets we strolled were practically deserted; distances of 100 yards or more between pedestrians were common. And although none of the stores we patronized were completely free of customers, the number of shoppers was far lower than what we'd witnessed twelve months earlier.

The contrast was even greater in the area of the Pueblo Riverwalk, one of Colorado's true gems of urban design, placed along a portion of the Arkansas River.

During the 2019 fair, the Riverwalk was bustling with activity: kids cavorting on a conveniently located playground, as well as families and visitors eyeballing statues, murals and other examples of Pueblo's art scene. And those who worked up an appetite covering the one-mile route along the water found plenty of food options nearby.

A deserted pedestrian walkway on the Pueblo Riverwalk grounds.
Photo by Michael Roberts
This past Saturday, a few diners populated tables on the patio of Brues Alehouse Brewing Co., but not many other people were in sight despite temperatures that were far more pleasant than for our 2019 tour. Over a twenty-to-thirty-minute time period, we saw around twenty or thirty people...maybe.

Our time in Pueblo was reminiscent of our July trip to Cheyenne, Wyoming, during the period when Cheyenne Frontier Days 2020, was supposed to have taken place. Both are towns where businesses rely on revenue bursts from a single annual event to help them get through the tough times.

With those happenings either eliminated or diminished by COVID-19, the times have become even tougher.