Photo by Michael Roberts
A sign of the times in Georgetown on September 12.
Over three months ago, our "Scenes From Colorado's Great Depression 2.0" offered Memorial Day weekend snapshots of several communities reeling from the devastating impact of COVID-19, including Georgetown and Idaho Springs.

During any other year, these charming mountain towns would have been packed with visitors from not just the Front Range, but across the country, enjoying an extended high-altitude getaway. In 2020, however, the downtown areas were practically deserted, raising concerns of an economic catastrophe capable of outlasting the ongoing pandemic.

So it was with trepidation that we returned to Georgetown and Idaho Springs this past Saturday, September 12, to see how they were faring in the run-up to the final weekend of summer. And to our delight, both showed signs of bouncing back.

Socially distanced patrons enjoying live music in Georgetown on September 12.
Photo by Michael Roberts
On May 31, Georgetown's main street looked like a long-forgotten movie set with no director on hand to call "Action!" The other pedestrians we sighted during the time we walked around town could be counted on one hand. Adding to the impression that time had stopped circa mid-March was a sign on the still-closed community center announcing that it would open in spring. 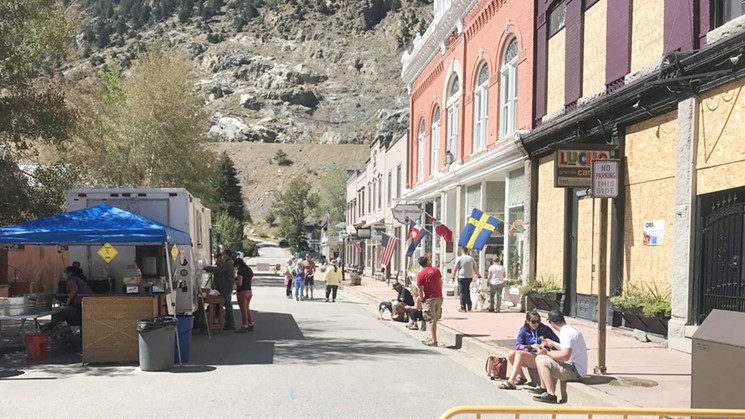 Lucha Cantina's brick-and-mortar location in Georgetown remains closed, but its owners were running on a food truck across the street on September 12.
Photo by Michael Roberts
On September 12, a different sign was posted in several locations: "Georgetown Is Open for Business." And indeed, the vast majority of retail outlets along the town's main drag lived up to this promise, including Shoppe Internationale, which boasts Christmas decorations and trinkets from across the globe. The narrowest aisles in the store had been widened to allow for social distancing, and while the location wasn't as packed with tourists as it might have been last September, a respectable number of browsers were on hand.

The same was true for other outlets we visited, thanks to a plentiful supply of folks strolling the business district sidewalks or listening to an acoustic group playing vintage music on the Georgetown bandstand. Most of the listeners were able to forgo facial coverings because of the space between tables, but mask use was consistent inside businesses among patrons and employees alike.

Outdoor dining spaces were busy in Idaho Springs on September 12.
Photo by Michael Roberts
Several restaurants had adapted to outdoor dining by way of patios built into the street. Arguably the most bracing example of resilience was offered by the owners of Lucha Cantina, whose brick-and-mortar establishment was destroyed in a fire several months ago and has yet to reopen. But the operation is again a going concern, having transitioned to a food truck parked across the street, and employees there were happily serving a steady line of customers demonstrating their support by opening their wallets.

The restaurants in Idaho Springs were even busier. On Memorial Day weekend, eateries such as Beau Jo's and Tommyknocker Brewery had attracted small lines of customers, but there were a lot more of them waiting for a chance to chow down on September 12 there and at other eateries that had created seating areas outside.

Questions remain about what will happen to this dining model when the temperatures plummet, and whether customers who felt safe eating in the great outdoors will balk at eating inside. But those worries can wait for another day. For now, it was exciting to see what had looked like a pair of ghost towns a few months back  proving that they're very much alive.