Mercury Cafe Worried About Saturation of Homeless Services in Neighborhood 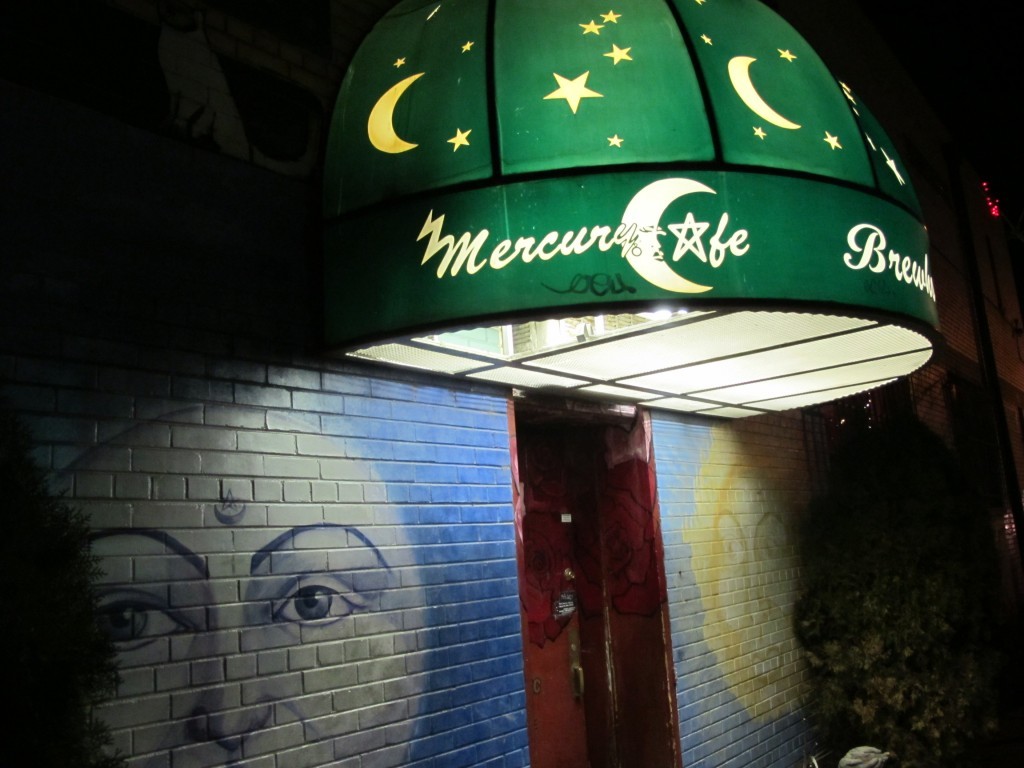 courtesy Mercury Cafe
The Mercury Cafe has been a bright spot in the neighborhood for decades.
Marilyn Megenity, who moved her Mercury Cafe to a building she bought at 2199 California Street more than two decades ago, created a haven there for many of this city’s creative and humanitarian causes. But right now, she’s on a collision course with the Colorado Coalition for the Homeless, which is currently working on a major project right next door to her venue.

Set to replace a half-acre parking lot in the 2100 block of California Street, the nine-story development will create 98 units of supportive housing for homeless individuals, plus 75 short-term assisted-living beds for those who have recently been hospitalized with an acute medical condition.

“This is actually a solution that would help to remove the people from the streets and provide them with their own housing, beds, kitchens, community areas and living space,” John Parvensky, executive director of the Colorado Coalition for the Homeless, says of the supportive housing units. As for the assisted-living beds, he adds that they’ll prevent homeless individuals who have been discharged from a hospital from “boomeranging back into the hospital system because the needs they have to recuperate are not there.”

But while Denver needs more supportive housing for individuals experiencing homelessness, Megenity thinks that the coalition and other service providers ought to stop concentrating so many services and projects in this particular part of town.

“I’m totally behind the coalition. We are so lucky we have people who are addressing this crisis in our society,” says Megenity, who points out that the Mercury feeds the homeless every Sunday and also provides free water and bathroom use. “For me, the problem is saturation.”

Directly behind the Mercury Cafe is the coalition’s Stout Street Health Center, which provides health care for homeless individuals, as well as the Stout Street Lofts: 78 units of affordable and supportive housing. Eighty-one units of affordable and supportive housing are located at the Off Broadway Lofts, which are just a block away.

The coalition also has various administrative offices located nearby. And three blocks away are the Renaissance Downtown Lofts, which include 100 units of supportive housing for social impact bond participants.

Although it’s not a coalition project, Urban Peak, another service provider, has its own drop-in center next to the Stout Street Health Center.

John Parvensky heads the coalition.
Colorado Coalition for the Homeless
Parvensky acknowledges that the coalition has a sizable presence in the area around the Mercury Cafe. “While that is correct, there have also been 1,500 new market-rate units that have been built in that same radius over the last couple years,” he says. “We don’t think that adding additional housing, which is essentially the solution to homelessness, would have a negative impact on her.”

Parvensky hopes to see the development, which has been about three years in the making, ready for occupancy sometime in early- or mid-2022.

“We’re fond of Marilyn and the great work she’s done in terms of really making the Mercury Cafe an institution in Denver and a unique venue and a place to recreate, to eat, to hear music, to dance,” he says. “The last thing that we would want to do is have a negative impact on her, and so that certainly is not our intent. We don’t think that this will have a negative impact.”

Megenity, whose venue already faces major challenges stemming from the coronavirus pandemic, says she’s “absolutely” concerned that the Mercury will take a financial hit if this development moves forward. “The neighborhood is already marginal, and this won’t make it better,” she says. In addition to official coalition projects, the area is filled with tents occupied by the homeless, who make use of the nearby services.

Megenity would prefer to see smaller, affordable and supportive housing developments and low-income medical clinics built throughout Denver, rather than just be concentrated in a few spots.

Certain parts of Denver, such as the area around the Mercury, definitely house far more services for low-income individuals than other areas of town. That’s a reality that the Department of Community Planning and Development is trying to change, at least somewhat, through a group-living zoning code overhaul that would make it easier for homeless shelters and other residential-care facilities to operate throughout the city.

In the meantime, though, proposed Safe Outdoor Spaces camping sites for the homeless were shot down at the Denver Coliseum and at 24th and Welton streets, just three blocks from the Mercury, when neighbors complained.

Megenity isn’t giving up her fight, either. In a final attempt to push back against the project, she’s encouraged supporters to write letters to city officials and the mayor’s office to express concern about the proposed development.

And yet there’s not much that can actually be done to stop the project. The lot is already zoned in a way that allows for the development, so the Colorado Coalition for the Homeless won’t have to go through a rezoning process and hearing before Denver City Council. The site development plan and building permit application are close to receiving the green light from the city. On top of that, the coalition has secured almost all of the necessary $48 million funding for the building, much of it from government sources.

Parvensky urges Megenity and other local businesses to stay optimistic.

“We think that taking out this parking lot and creating 24-hour activities next to it will actually improve the condition of this neighborhood,” says Parvensky. “Once the rest of the area develops and there’s less opportunity for widespread encampments, that will provide a better quality of life overall.”