Grace Clark
Monica LaBonte is going solo.
Former Monocle Band frontwoman Monica Marie LaBonte grew up in Colorado Springs, and spent her childhood camping in the summer and spending her winter breaks on the slopes at Beaver Creek.

"I grew up in a very outdoorsy, lover-of-nature kind of family," says LaBonte, now 35. "That's been my whole life."

Colorado's influence shines on her new EP, See Through, where she croons about pine trees, rivers and the state in the summer. And it's not just the great outdoors that shows up in her music; Front Range cities like Boulder, where LaBonte first broke into the acoustic scene, also make an appearance.

She waxes about college-town bars and venues that helped Monocle Band get its start. The group dropped its first album in 2013 and played its last show this past January. 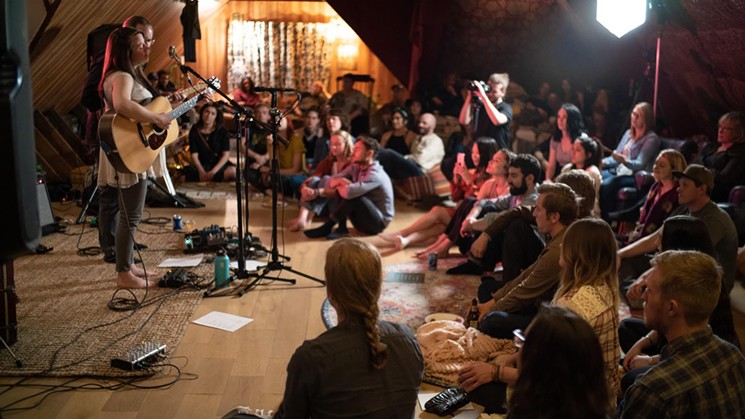 Monica LaBonte performs for a small crowd before the pandemic.
Grace Clark
"We did that whole late-night bar circuit for a while. I was in college, and I lived close to downtown. It was a lot of late nights writing music," LaBonte recalls. Gigs back then were wild, she says. She remembers an audience member banging on the monitor, screaming at the group to play Third Eye Blind, then getting up on stage and taking her microphone. It was a chaotic scene, but she loved it.

Now LaBonte is excited to be venturing out independently, carving out more room for her own creative expression. When she was in Monocle Band, she would often write snippets of songs that would be reworked by the whole band.

"I got the desire to write on my own," she says. "I looked into what it would look like if I wrote all of the lyrics and songs."

And after the band split in January, she was on her own, for better or for worse.

See Through, which drops November 13, explores her deepest emotions and mental health.

She points to "River Song," which she says is "straight up about depression and recognizing in myself the cycles of depression and being able to reach out to the people I love."

While she's excited for fans to hear the new EP, she's sad that she can't perform a typical release party because of COVID-19. In the meantime, she'll christen the project with a live-stream concert at 8 p.m. tonight, and her hope is that the new recordings will give people a chance to enjoy her music any time they want.

"One reason I decided to release my EP is that it's a way to get things out there without having to be live, in person," she says. "I'm grateful I have this EP."

Monica LaBonte will celebrate See Through at a Facebook live-stream concert at 8 p.m. on November 13.