What The Syndicate Podcast Taught Me About Colorado's Black Market

Scott Carney
Chris Walker searches for bags of cash on Mount Herman Road.
As I rounded a corner on Mount Herman Road, an unpaved access way cut into the forests above Monument, I began to see evidence of what I was looking for. Still, I wanted to be absolutely sure I was in the right spot, so I decided to compare notes with an audio recording I’d obtained. I hit the “play” button on my phone, and a voice crackled to life over the car’s speakers.

“It was like fifty yards of trees off the side of this mountain that had all just been mowed down,” the voice said. “There were thousands of casings everywhere. It was like a place where people went to go shoot their guns.”
The forest around me certainly fit the description. It looked like a war zone. Even though the U.S. Forest Service had banned recreational shooting along this road in 2014, there were still areas full of pockmarked trees — just as the recording described — as I drove along it in October 2019.

But my mission in the forest wasn’t just to locate old bullet casings. I was looking for a bag of cash. Drug money, to be exact.

Toward the end of last year, I found myself going on all kinds of similar misadventures. This trip into Pike National Forest was just one part of an expansive investigation I’d initiated into a marijuana-smuggling group that operated in Colorado from 2010 to 2014. I first heard about the group while working as a Westword staff writer in 2015. State authorities in Colorado made a big deal out of prosecuting the black-market enterprise, boldly calling their takedown “Operation Golden Go-fer” — a reference to the sports team at the University of Minnesota, where some of the group’s members had met.

I wanted to know the full story behind the group’s rise and fall, but I had to wait years — until mid-2019 — before the state agreed to unseal its investigative files. Once I had access to the records, though, I committed to reporting the story and chasing every lead. Soon, I found myself not just looking for bags of hidden cash, but flying around the country — and even jumping out of airplanes — in pursuit of a wild tale.

The result is The Syndicate, an eight-episode narrative podcast series that explores an ambitious pot-smuggling operation and the underbelly of Colorado’s cannabis industry. After the final episode dropped on September 22, the whole show became binge-able, with all the elements of a Hollywood caper: skydiving drug mules, dispensary thefts, a laboratory explosion, informants and, yes, tales of drug money stashed away in the Rockies.

But beyond all the window dressing and high-flying antics, the group’s biggest accomplishment wasn’t flying up to 900 pounds of pot out of state (and over the heads of regulators) on each smuggling run; it was hiding in plain sight within Colorado’s regulated cannabis industry. It did this by posing as legitimate growers, and by exploiting one of Colorado’s oldest medical marijuana programs: the caregiving initiative (in which “caregivers” grow small amounts of medical weed for individual patients). 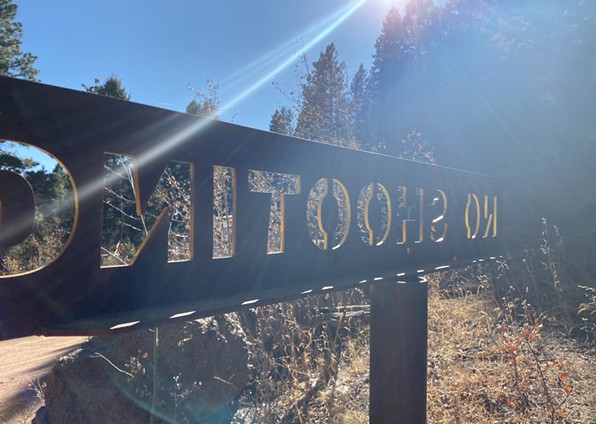 A former gun range in Pike National Forest.
Scott Carney
By hoodwinking regulators in Colorado, a state with legal weed, and smuggling marijuana to Minnesota, where weed was illegal, the group made millions of dollars upselling its product on the black market. The scheme raises some serious issues about cannabis regulation, and my investigation taught me some important things about cannabis legalization and the persistent black market. Here are the big two:

• Interstate marijuana trafficking is going to exist as long as this country maintains a patchwork of state laws around weed. If we continue to have some states where weed is legal and others where it is illegal, there will always be the incentive to smuggle cannabis out of legal markets and sell it at a profit on another state’s black market. And so, nationwide legalization — and taking cannabis off a Schedule 1 classification — is a crucial step in eliminating interstate pot trafficking.

• But even if marijuana is legalized at the federal level, the black market is not going to magically disappear overnight — despite what some pro-legalization movements suggest. Case in point: Canada. Although Canada legalized weed nationwide in 2018, the country still has a robust black market. In August 2019 — one year after legalization — the Canadian government found that illicit sales accounted for over 70 percent of the entire weed market.

That said, if weed is legalized at the federal level, there are a couple of ways to curb the black market and gradually bite into illicit marijuana sales:

• Don’t tax weed so much that people aren’t willing to shoulder the cost to buy it legally. Pot consumers are like any other customer: They want a deal. And we’ve already seen that if municipalities tax cannabis too aggressively, as some have in California, consumers may decide to buy weed illegally from their street dealer rather than pay the premium for legal weed at dispensaries. In other words, the price of legal weed needs to remain competitive with street prices, or else the black market survives.

• People need access to legal weed. After all, if there are no dispensaries around, where do you buy cannabis other than the black market? This is a problem we’ve seen in Quebec, where the Canadians’ slow rollout of dispensary licenses has stifled the legal market. It’s happened in Colorado, too: El Paso County, despite comprising Colorado Springs, has only two recreational pot shops — both in Manitou Springs. Where do you think all those college students in the Springs get their weed? Some may drive out of El Paso County, sure. But others aren’t going to make the effort to do things by the book; they’ll turn to their corner dealer.

Just as Colorado became the first state to sell recreational cannabis, it can be a leader in curbing the cannabis black market. In some parts of the state, ample supply, easy access and good ol’-fashioned capitalistic competition in the regulated industry has driven down prices to a point where legal weed is competitive with black-market weed. (Denver alone has 167 recreational dispensaries.) Colorado would also do well to strengthen regulatory programs like “Seed to Sale,” which make it harder to grow illicit marijuana right under the noses of state regulators.

All of this will help shrink cannabis’s underground economy year after year, in the same way that bootlegging and moonshining gradually disappeared as a significant threat to legal liquor after Prohibition was lifted. And we need to not just remove the profit incentives of operating in the shadows, but also overcome some basic human nature.

During my treasure hunt, as I drove up onto a ridge in Pike National Forest, I found another former gun range. There were sawed-in-half trees, lots of spent shells. And a cliff that looked exactly like the place that a source told me he watched someone toss a bag of cash with a GPS tracking device on it.

The Syndicate
As I approached the cliff on foot, the producer who was accompanying me remarked, “You get this sense that they felt kind of untouchable…the shotguns, the drugs, the money. It kind of plays into those stereotypes.”
I think she’s right. We still have a lot of history and cultural stereotypes to undo if we’re ever going to fully transition cannabis into the sunshine. But little by little, evidence of its past is disappearing.

When I peeked over the cliff, I saw that the ground at the bottom was already covered in feet of snow. I’d have to come back to make sure there aren’t still some bags of cash down there.

The Syndicate is available on all podcast platforms, including Apple, Spotify, Stitcher and Google. For more about the show, visit thesyndicatepodcast.com.