Inside Polis's Budget Proposal to Help State Recover From COVID-19 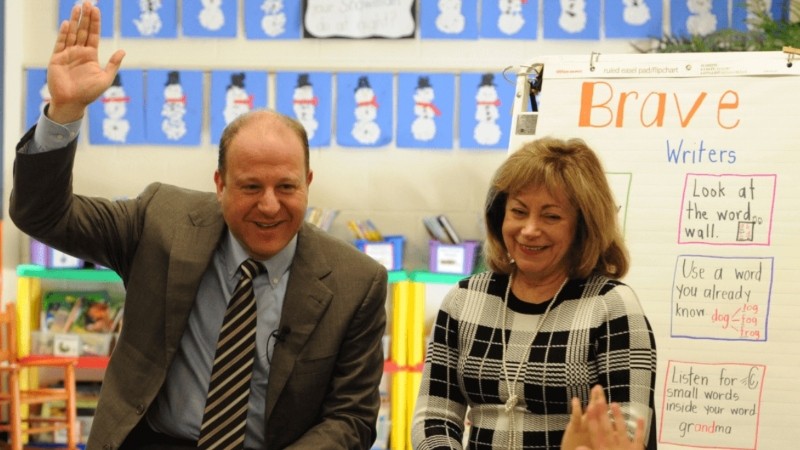 colorado.gov
The landing page for Governor Jared Polis's website shows him with Lieutenant Governor Dianne Primavera on a school visit.
During a November 2 press conference, Governor Jared Polis offered a first look at his Colorado budget proposal for fiscal year 2021-2022, which begins in July of next year and runs through the following June. But while he touted efforts intended to stimulate an economy ravaged by the COVID-19 pandemic, he conceded that the novel coronavirus is expected to negatively impact the state from a financial perspective through at least 2023.

At the outset, Polis noted that despite the election, wildfires and more, he has a statutory responsibility to submit a balanced budget proposal on the first Monday in November. But he admitted that the challenge of keeping red ink at bay is greater than ever this year because of COVID-19.

"We are seeing very alarming, very concerning trends," he noted, pointing to a third consecutive day in which more than 2,500 new cases of the infection have been identified in Colorado — an enormous increase over a few weeks ago, when totals in the 300-to-400 range were commonplace. If case counts continue on this trajectory, he pointed out, "our hospitals will run out of capacity." In his view, Coloradans simply aren't doing a good enough job of following safety protocols, including wearing facial coverings in public and avoiding large gatherings. Polis asked residents to "limit social interactions for a few critical weeks. Let's avoid getting together now so we can see our loved ones over the holidays."

On the subject of the budget, Polis, assisted by Lauren Larson, who directs Colorado's Office of State Planning & Budgeting, noted that the proposal calls for $35.4 billion in total funds, with $13.6 billion earmarked for the general fund. Both of these figures represent considerable increases above prior levels, Larson said, because the revenue that the state collected was higher than the amount forecast this past May. "We bounced back a little more than we expected," she pointed out, "but we're still forecasting annual operating deficits well into the future."

The budget expenditures fall into three general categories, Polis said: restoring major cuts made during the previous budgeting process, investing in stimulus programs intended to quicken Colorado's economic recovery, and increasing reserve funds to 10 percent in case the already rainy days we've experienced are followed by an even greater downpour.

The plan is merely a starting point for a process that will involve input from both houses of the Colorado Legislature. As written, it includes cuts described as a "responsible savings package of $422 million," including $272 million from the general fund. But Polis focused on the benefits he's floating, exemplified by the following reduction restorations:


• Restores and increases per pupil funding for education by $902 and returns the Budget Stabilization Factor to the FY 2019-2020 level of $572 million, leaving the funding gap at a nearly eleven-year low of 6.6 percent

That last proposal includes assorted items on a Colorado Department of Transportation wish list that are said to be shovel-ready and fall in both urban and rural locations.

On the public-health front, Polis wants to set aside $577 million in state and federal funds for "mass testing, personal protective equipment, support for local public-health agencies, contact tracing and improved patient care capacity." Also included is $179 million to repay spending from the state's emergency reserve fund and another $200 million for additional COVID-19 services next year — a sum that Polis hopes will be covered by a future federal stimulus bill. If so, that $200 million can be used in other areas, but it's available if politicians in Washington, D.C., can't agree on new aid for states. Another $78 million is also suggested for use "to prevent, respond to and recover from wildfire," and $105 million in tax relief and direct aid has been designated for bars, restaurants and similar businesses that may suffer as a result of capacity restrictions like those that have now been put in place in Denver.

During a question-and-answer session, Polis conceded that great uncertainty remains regarding how much money will actually be available for the budget; he characterized his presentation as an attempt to provide greater clarity.

"The pandemic is far from over," he conceded, and while his tone was optimistic as a whole, he predicted that "some of our darkest days as a nation" may still be ahead.

Click to view the complete package of Polis's budget proposals and his presentation overview.